Anita Katyal: This meal, brought to you by you-know-who

Not just Modi and RSS, even Pinarayi Vijayan wants it known he's been doing good work 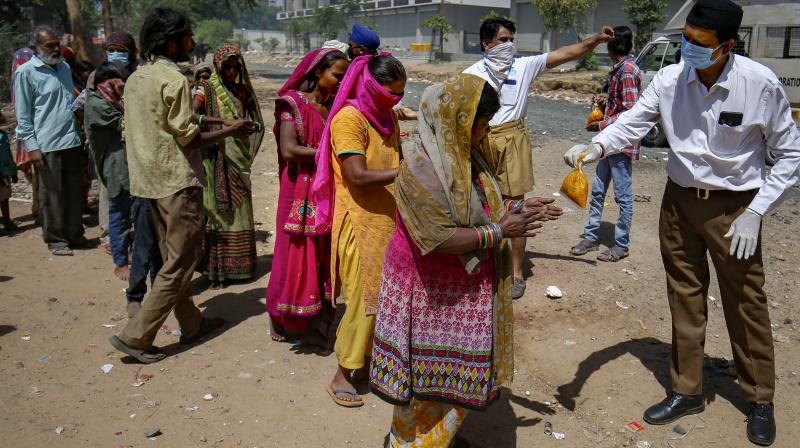 Every political leader is using the present health crisis to enhance his or her image. Prime minister Narendra Modi has taken the lead here by setting up a special public charitable trust, PM-Cares, to raise funds for containing the spread of coronavirus. Modi obviously wants his signature on the cheques to be handed to the beneficiaries. Even the food packets being distributed at relief camps have Modi’s photographs on them.

The BJP’s ideological mentor, the Rashtriya Swayamsevak Sangh, is also lending a helping hand to those in need of assistance but its foot soldiers make it a point to wear their trademark uniform and don the black cap so that they can be easily identified. Coming to Modi’s rescue, RSS pracharaks are telling mediapersons in private conversations that the prime minister cannot be blamed for the rush of migrant workers as this is an annual feature — they usually go to their villages at this time of the year for the harvest season.

Kerala chief minister Pinarayi Vijayan, who has come in for praise for his handling of Covid-19, is hoping this will help him acquire national stature. He is ensuring that the details of his government’s work are disseminated far and wide, even going to the extent of sending press releases in Hindi.

Lyricist Javed Akhtar has been a worried man since a case was filed against him in a Bihar for his “seditious” comments on the recent Delhi riots. Akhtar called up Bihar chief minister Nitish Kumar for help but despite several attempts got no response. The nervous Bollywood personality then rang up a friend in Delhi, who is known for his proximity to the Bihar chief minister, and asked him to put in a word with him. Nitish Kumar is said to have told his Delhi friend that Akhtar need not worry and that nothing will come of this case. But he still did not take Akhtar’s calls.

Well before prime minister Modi conferred with chief ministers on the steps needed to deal with the coronavirus outbreak, he dialled West Bengal chief minister Mamata Banerjee and praised the measures taken by her government to help citizens during the lockdown. This was followed by phone calls from home minister and external affairs minister Amit Shah and S Jaishankar.

This sudden outreach to Banerjee has led to considerable speculation in the capital as political pundits attempt to decode the real purpose of these calls, especially since the Bharatiya Janata Party and Mamata Banerjee’s Trinamul Congress are locked in an eyeball-eyeball confrontation in the state keeping in view next year’s Assembly polls.

The two parties may be battling each other but the BJP does not want to alienate Banerjee completely and push her to tie up with the Congress in the coming state election. This is in line with the BJP’s strategy of isolating the Congress and keeping it away from regional parties so that they do not band together to put up a united fight against the saffron party.

Nitish not in a happy place

Although the Bihar Assembly election is still several months away, there is talk in political circles that it could be rescheduled because of the coronavirus outbreak. Apparently, Bihar chief minister and Janata Dal (United) chief Nitish Kumar, a Bharatiya Janata Party ally, is most unhappy with the Modi government for its failure to anticipate the exodus of migrant workers to their villages. State governments were worried that the deadly virus would spread to rural areas with the return of the migrant workers and they were ill-prepared to deal with such a health emergency.

An angry Nitish Kumar publicly stated that he would not allow the migrants to enter Bihar. This statement has predictably blotted Nitish Kumar’s copybook and it is felt that the current mess could damage the electoral prospects of the ruling JD(U)-BJP alliance. Both parties need time to recover lost ground and so the whispers about a possible postponement of the Assembly polls.

Well before former finance minister P Chidambaram put out a detailed statement outlining a 10-point plan to tide over the economic crisis facing the country following the lockdown, mediapersons on the Congress beat were told in advance about this press release. And true to its word, the statement was promptly circulated on the party’s WhatsApp groups for the beat reporters. But to everyone’s surprise, the release was subsequently withdrawn.

Party insiders attribute this to Chidambaram’s description of the Prime Minister as the commander in chief and the people as foot soldiers. He further said that “we owe a duty to extend our total support” to him. This is odd since the Congress has officially extended all support to the Modi government as it battles to contain the spread of coronavirus.

However, Chidambaram’s subsequent tweets have been fairly critical of the government’s financial package and its handling of the rush of migrant workers to their villages.