Sunanda K. Datta-Ray: Only doctors and nurses can save India now 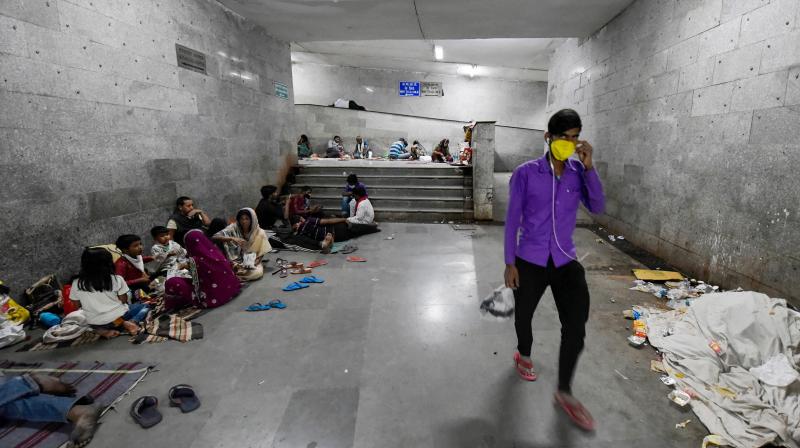 Patients discharged from the All India Institute of Medical Sciences (AIIMS) in New Delhi ,and their attendants take refuge amidst unhygienic conditions in a subway near the hospital as the nationwide lockdown left them no means of transport to go back home. (PTI)

I still don’t quite know what purpose Sunday night’s nine-minute light-and-dark ritual — which I too observed — served, but I certainly hope it honoured the role of doctors. That was emphatically stressed in an old Calcutta Medical College joke about a dom and a chamar refusing to rescue someone who had collapsed in a public lavatory. One cleared faeces, the other removed corpses; neither would touch both. Eventually, they brought a doctor from the college. He alone had no prejudices.

That has again been demonstrated in these fraught weeks as India’s healthcare system — if a confusion of ill-equipped clinics, poorly staffed hospitals and expensive private nursing homes can be called that — grappled with waves of infection. That is why I was alarmed to read the headline in a national newspaper “US opening doors to Indian medical graduates under Covid-19 pressure”. Adding to my dismay, external affairs minister S Jaishankar reportedly raised the question of skilled Indian professionals on H-1B visas in the United States when secretary of state Michael R. Pompeo telephoned him to discuss a coordinated response to the Covid-19 pandemic.

India desperately needs its doctors and nurses. Not all doctors may be equally dedicated; and not all nurses equally well-trained. Some, in fact, are little better than ayahs who have undergone a six-month course in minimal housekeeping. But with only 1.7 nurses per thousand people, well short of the World Health Organisation-recommended three-per-thousand, we can’t do without them. Prime minister Narendra Modi calls medical workers our “frontline soldiers”.

If Covid-19 has revealed their courage and commitment, it has also exposed India’s shocking indifference to health and hygiene. Not just the present BJP-dominated National Democratic Alliance but all Indian governments right from 1947 onwards have concentrated on high-visibility prestige projects instead of welfare. Although the WHO congratulates India on eliminating two “silent killers”, polio and smallpox, Indians have always found that going to the moon or sending a spaceship into orbit is far more dazzling than tackling malaria.

Any comparison between India and Western countries suffering from the pandemic is totally unrealistic because Italy, Spain, the United States and Britain all have a medicare infrastructure and a safety net for their citizens. Indian claims are suspect because the statistical data is arbitrary and unreliable. Even so, the doctor and population ratio of 0.77:1,000 lags far behind Germany’s 4.125:1,000, Australia’s 3.374:1,000 or Russia’s 3.306:1,000. China, where it all started, has 1.49 doctors per thousand. India’s 2017-18 health budget spent only 1.28 per cent of the GDP on health.

The hospitals we do have, especially many that are run by the Employees’ State Insurance Corporation, are often only bleak and empty buildings. Some lack basic medicines at the best of times. They are woefully short of essentials like critical care beds. Despite the health ministry’s bland assurances, supplies of personal protective equipment (including gloves, masks, sanitizers and hazmat suits) are far from adequate. In consequence, medical staff are constantly exposed to infection, and many have already contracted the coronavirus.

Of course, that occupational hazard isn’t unique to India. A general practitioner in a small English town became the UK’s first doctor to die from the disease. What seems peculiarly Indian, however, is the hostility with which doctors and nurses are sometimes treated, not just by ignorant villagers but even by policemen and others charged with enforcing the lockdown.

Instances of such atrocious behaviour have been reported from Hyderabad in the south, Surat in the west, Indore in India’s heartland, and Delhi and Ghaziabad in the north. People have spat at medical personnel, pelted them with stones, and chased them away from their homes and localities. Archaic sexism surfaces in the case of women doctors and nurses, who are sometimes treated to lewd and abusive language. When a patient died in a state-run hospital in Kolkata, his brother attacked the medical staff accusing them of negligence.

The Indian Medical Association reports that 75 per cent of doctors face verbal or physical abuse in hospitals. Fear of violence is the most common cause of stress for 43 per cent of doctors. The highest incidence of violence is reported at the point of emergency care, with 70 per cent of the violence being initiated by a patient’s relatives. Such crimes have become more common since 2017 in Delhi, Maharashtra and Uttar Pradesh.

Some Indians are inherently lawless. Others are suspicious of the state and its instruments. Religious fanatics may object to modern medicine just as they oppose family planning. Yet others have learnt from the Sangh Parivar’s lynching sprees that rough and ready methods go scot free in today’s India.

US president Donald Trump, normally so unsympathetic to Afro-Asian immigration, now casts longing eyes at the doctors who are at the suffering end of this persecution. He also wants to buy Indian hydroxychloroquine, the malaria drug believed by some to work for coronavirus. Whether or not Modi agrees to sell, he can without any qualms refuse to allow Indian doctors to respond to American blandishments. India’s senior bureaucrats, diplomats and politicians may hanker for the American green card, regarding the supposed land of the brave and home of the free as the nirvana for their children, but doctors whom India has nurtured in every respect cannot abandon their country in its hour of need.

Modi has taken some tough and timely decisions. Now he must heed Dr David Nabarro, the WHO’s coronavirus special envoy, who warns that hospitals and health workers “are on the front line”. Treating them well and “protecting them as much as we can and supporting them in society so they get looked after... really making sure they are secure and safe” -- is perhaps the only way to safeguard our future.

Despite all their shortcomings, they alone can save India.