What if Bobby became Prez in 1968: Would it change US?

Robert F. Kennedy (RFK) listens politely at first, then realises the song is about his brother and his face crumples up. 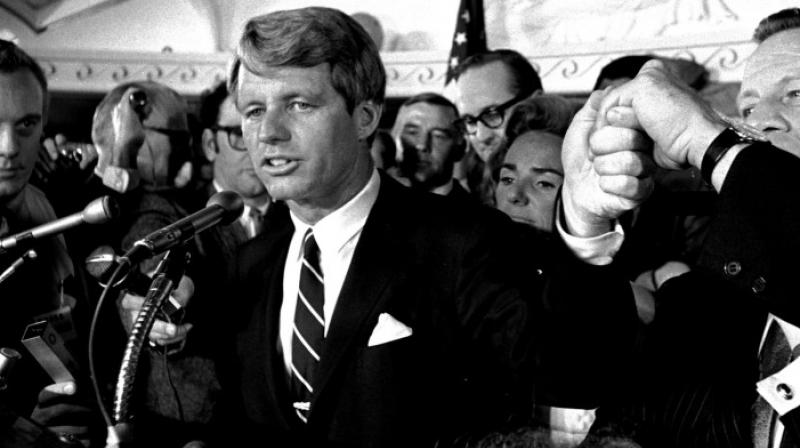 It’s 1968, and on a flight between two campaign stops in the US, a freshly declared candidate for the Democratic nomination in that year’s presidential election is introduced by an aide to a friend of his, a singer-songwriter who specialises in topical comment.

The aide persuades the performer to sing one of his most poignant compositions. There isn’t a guitar handy, so Phil Ochs taps his foot to keep the beat and launches into Crucifixion: “They say they can’t believe it, it’s a sacrilegious shame,” goes one of the many verses. “Now, who would want to hurt such a hero of the game?/ But you know I predicted it, I knew he had to fall/ How did it happen? I hope his suffering was small./ Tell me every detail, I’ve got to know it all,/ And do you have a picture of the pain?”

Robert F. Kennedy (RFK) listens politely at first, then realises the song is about his brother and his face crumples up. Ochs is rewarded with precisely what he’s singing about, “a picture of the pain”.

Ochs was among many on the left of American politics who were enthusiastic about the candidacy of senator Eugene McCarthy, but began to contemplate switching their allegiance once Bobby Kennedy entered the fray. Martin Luther King Jr apparently felt the same way, but was assassinated within weeks of Kennedy’s declaration of intent.

As attorney general under John F. Kennedy (Bobby had accepted the appointment despite recognising it as an instance of nepotism), RFK authorised the wiretapping of King. Both brothers tried to persuade the civil rights stalwart to slow down. And although the two of them were instrumental in defusing the Cuban Missile Crisis, RFK was reputedly associated with at least some of the CIA plots to murder Fidel Castro. Besides, as a budding young politician, he was a party to the zeal of the anti-Communist witch-hunt launched by Senator Joseph McCarthy.

But RFK came across as a very different political personality amid the turbulence of 1968. There was a deep-seated antipathy between him and his brother’s successor, Lyndon B. Johnson (LBJ), so he decided against aiming for the vice-presidential slot in 1964 and instead successfully ran for the Senate from New York. As a senator, he plugged into the emerging radical zeitgeist. As a presidential hopeful four years later, he stood for racial and economic equality, and cast himself as an articulate opponent of the Vietnam War his brother’s administration had exacerbated.

He was evidently a strong supporter of Israel, though, and that is what appears to have cost him his life 50 years ago today, about 24 hours after he was shot down in the kitchen of the Ambassador Hotel in Los Angeles while leaving a gathering that celebrated his crucial victory in the California primary. The apparent assassin was Sirhan B. Sirhan, a young Christian Palestinian whose parents had felt obliged to leave Jerusalem in 1948.

Sirhan, who remains in prison after more than a dozen parole applications have been turned down, has never denied shooting Kennedy. But he has consistently maintained that he does not clearly remember the incident. Inevitably, the event has spawned conspiracy theories. There were, for instance, plenty of witnesses, but none of them saw Sirhan get close to Kennedy, whose fatal wound was delivered by a bullet in the back of the neck fired at point-blank range, according to forensic experts. It is also alleged that 13 bullets were fired that night, whereas Sirhan’s handgun held only eight. Just six months ago, one of RFK’s sons, Robert F. Kennedy Jr, visited Sirhan in prison and emerged from there to say he was more convinced than ever that someone else was responsible for his father’s assassination.

As in the case of JFK, it is possible that the mysteries surrounding the murder will never conclusively be resolved. Likewise, it’s impossible to tell what a second Kennedy presidency might have portended. It’s probably safe to conjecture that it would have notably differed from the presidency of Richard M. Nixon, whose campaign slogan of “peace with honour” in the context of Vietnam in fact led to a disastrous escalation of the war.

It is dolefully common for presidencies in the US (and elsewhere) to vastly differ from campaign promises, as witnessed not long ago in the case of Barack Obama, whose 2008 campaign raised many hopes that subsequently remained unfulfilled. President RFK may likewise have offered a substantial contrast to candidate Kennedy. But we will never really know, just as it’s impossible to tell whether RFK could indeed have won the Democratic nomination and then gone on to defeat Nixon.

Much tumult lay ahead in that year, in the US and worldwide. But the second Kennedy assassination sadly made it impossible to ascertain whether a different America (and by extension a different world) was possible.