Cyrus, a declared Zoroastrian and follower of the single god Ahura Mazda is mentioned in several instances in the Old Testament 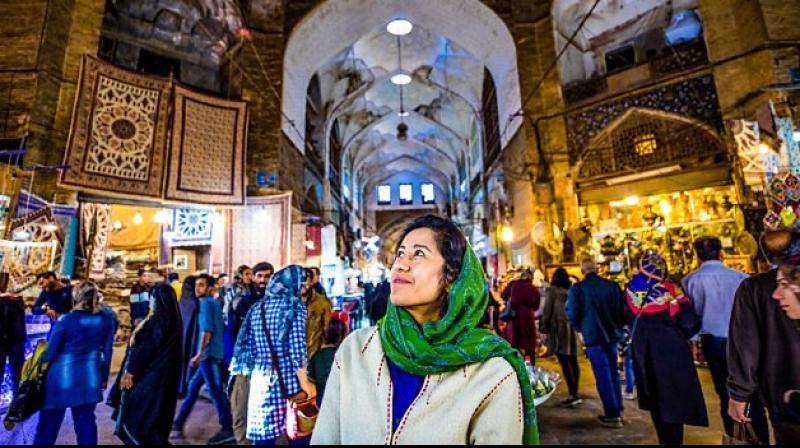 The Art of Persia, presented by the very talented and unassuming presenter Samira Ahmed purports to recreate the history of Persia through its artefacts. Photo: Twitter

“Rhyming is the occupation of fools
Language and music have so many other tools
But Bachchoo, you, in this foolishness are stuck
You can’t even find a rhyme for –that last line….”
— From Pardesi Paradox by Bachchoo

Many of you, gentle readers, know that this column is named after a verse from Lewis Carroll. The Walrus, one of his characters, says that the time has come to talk of many things — “of shoes and ships and sealing wax/ Of cabbages and kings”.

Others, I am sure a minority, who can’t be bothered with fantasist or satirical writers such as Lewis Carroll (real name Charles Dodgson, real profession Cambridge mathematician) may be wondering why I never write about band gobi and rarely write about royalty.

The point is that this column writes about most things but stays away from reviews of books, TV shows, films etc. — a self-imposed rule which I, in these days of Covidal Confinement, choose to break.

There is on the BBC a fascinating series called The Art of Persia, presented by the very talented and unassuming presenter Samira Ahmed. It purports to recreate the history of Persia through its artefacts and chooses as the central narrator of the past, the great poet and writer Firdausi who in the tenth century, in Muslim Iran, wrote the Shahnama, the chronicle of Persia’s mythical and real Kings (no mention of cabbages!)

I suppose the written chronicle counts as ‘art’, but it’s only a starting point. The stories of the chronicle, such as that of the heroic Rustom, take us to portrayals in painting and then to the architecture, stone engravings, the edicts and other surviving artefacts of prehistory and history.

The history begins with the Elamites and the city of Susa and then progresses in the first minutes of the first episode to the formation of what historian call the Persian Empire under Cyrus the Great.

This Cyrus, a declared Zoroastrian and follower of the single god Ahura Mazda is mentioned in several instances in the Old Testament. In the book of Nehemiah, the good book says that the Jewish Nehemiah, Cyrus’s cup-bearer, complained to him one day that the wicked Assyrians have destroyed the temple in Jerusalem and taken his people captive.

Cyrus promises to sort it out and sends, or perhaps leads, his armies to conquer Mesopotamia, set the Jewish slave population free and begin the restoration of the Jewish temple in Jerusalem.

I only recount this story, because Samira alludes to it in the docu-series, but doesn’t go into any detail. In the interests of reviewing, gentle reader, I have to say that the presentation of the landscape and the commentary on the ruins of the cities and palaces is faultless.

The history is — how shall I put it — sketchy and selective. For instance, very little is said about Xerxes, the Achaemenid successor to Darius and probably the Persian of that dynasty whose annals and wars are best known.

The Americans even made a film called the 300, or some such lying number, celebrating the incident at Thermopylae where an army of Spartans ambushed a remote patrol of Xerxes’ invading force.

Of course, the American version made heroes of the Spartans and villains of the Persian forces.

The documentary skipped from Xerxes through a few hundred years to the defeat of Darius III by the vandal ‘Alexander the Damned’ who overran Persia and destroyed the very cities and palaces that the documentary seeks to celebrate.

At this moment in straitened times, when the statues of slave-owners and other people who have been unfair to people they tyrannised are being pulled down, this cult of Alexander in the Eurocentric histories of his vandalistic behaviour should surely be questioned?

To be fair, Samira did mention his destructive tendencies, but skipped over his genocidal ones.

Which reminded me, gentle reader, of a time at the international film festival which I attended in Goa several years ago.

The final film at the festival was Alexander by Oliver Stone. The producers of the film threw the final party of the festival in the grounds of the Taj hotel and, being an American-hosted party, there was no dearth of food or drink and everyone at the festival flocked.

There was a huge poster advertising the film on the beach and the renowned British film critic Derek Malcolm and I were standing in front of it when a TV crew with a female presenter approached us.

“What did you think of the film, Mr Dhondy?”

She pointed to the poster saying “this one”.

“You expect me to bother to see this film?” I asked, pointedly.

“Why not?” She was genuinely puzzled.

“It’s like asking a Jew to sit through a film extolling Hitler,” I said.

“What? Why?” — and all this being transmitted live on TV.

“Because I am a Zoroastrian, a descendant of the Persians whose civilisation this bastard Alexander attempted to destroy.”

“Oh,” said the poor presenter, “When did all this happen?”

“In 326 or so BC,” I said — and then feeling mischievous I thought I’d make trouble and said,

At which point Derek broke in and stole my thunder.

“No Farrukh, not minorities, it offends the majority of people who see it.”

That was the end of the interview. The crew moved on, presumably to more fertile pastures.

One of the central insights of the documentary series, whose first episode ends with the invasion of Persia by the Arabs in 641 AD, is that Iran is the one convert country which has retained its culture, despite being conquered by Muslims. I don’t know if this is a completely justified premise. The majority of Zoroastrians embraced Islam.

Very many of them are still called Farrukh and Gulrukh, but then very many are also called Ali and Ahmed.

But deep down, as Samira says, are they all Parsis?