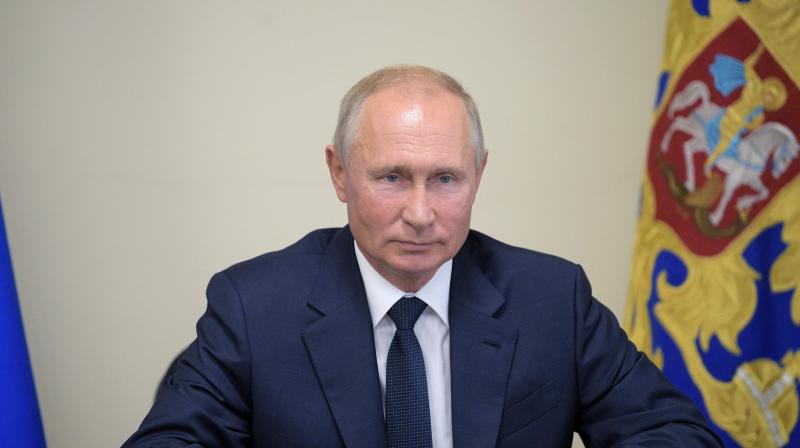 Putin here, Putin there, Putin everywhere! The bhoot of Russia’s strongman is hard to escape. Putin’s “New Russia” is sexy, glamourous, flashy and trashy! A far cry from the grim and dingy Stalin era the world is familiar with. I brought back a smart black coffee mug with the 68-year-old Vladimir Putin’s mugshot on it. Putin is omnipresent, make no mistake! Literally and figuratively. When I walked into the souvenir shop looking for matryoshka dolls for my grandkids, I was a little surprised to find several shelves crammed with Putin dolls: get five Putins for the price of one!

Somehow, I didn’t see my fastidious bachchas playing with Putin gudiyas, so I settled for the more traditional brightly painted Babushkas instead. I turned around to get the usual touristy “image” tees as gifts. The one I loved featured empty vodka bottles and messages that read: “Been to Russia… remember nothing!” Oh my! Keep looking! Who do I see glowering menacingly at me from just about every tee?? Putin Saab! I don’t know anybody at home who’s keen on wearing Putin across his/her chest. Next, I looked for other fun gifts and mementos minus Putin Saab’s face. Difficult.

Fortunately, this particular shopowner spoke fractured English, so I asked if he’d ever run into a problem with his Putin merchandise. He shrugged, saying as long as it wasn’t offensive or abusive, the Leader was okay with it! And why not? It only adds to his ambitious brand-building.

But not every Russian is a fan. We ran into a cool local character outside our hotel in Moscow. He offered to click our pictures and added cheekily: “Don’t worry… I won’t steal your phone… it’s not expensive enough!” We got chatting. He said he’d left Russia over a decade ago, because he was hounded out by Putin’s guys. Today, he runs a very successful business (I didn’t dare ask what that was!) and lives in Corfu. So, what brings him to Moscow? He answered simply: “Family!” Then threw his head back and declared: “Putin has really f**ked us all!” His teenaged daughter looked at him in alarm and said: “Why not shout even louder? Let everyone hear what you think of Putin.”

The same evening, a cab driver offered to take us to see the gorgeously lit city… and chat! As he drove through the semi-deserted but beautifully illuminated streets, he kept pointing to one building after another, declaring disgustedly: “That’s KGB… this one is KGB… that one also.”

The KGB (which Putin once headed) still rules Russia, and the locals accept it philosophically. What choice do they have? “Look at the number of cameras on this street…” another man pointed out. “They watch everyone, everywhere, all the time… nothing is a secret in Russia.” True enough, we looked up and every conceivable spot was covered by Big Brother’s surveillance systems!

Language is a huge issue, which can be a real bummer for getting around in the magnificent cities of Moscow and St. Petersburg. (While the grandeur and magnificence of both cities is staggering, it’s reassuring to know the rouble-to-rupee rate is same-same!) But unlike the dour image of grumpy, shabby Russians, most people we encountered were friendly, helpful and well-dressed. “We were given a bad name by Western propaganda films,” said a trader.

Remember the Cold War and a slew of Hollywood spy films where every baddie was a nasty Russian Commie with a bald pate and ice blue eyes? Compare that stereotype with the confident affluent young Russians driving around in convertible Bentleys or roaring down broad avenues in the latest Ferraris. I saw more Maybachs cruising the chic districts of Moscow in a single evening than I’d see in a week in London. Every second woman resembled an haute couture model on a Milan catwalk, while the athletic-looking men in sharp suits looked straight out of a James Bond movie, with a license to kill.

Gone are the days of watching blockbusters featuring Russian villains with mismatched eyes and deep scars. Gone too, the outdated representation of “Commies”: rustic, rough, shabbily dressed men and women with caps and headscarves: the peasantry, as it were.
Today’s Russian is super cool and super-confident, jetting around the world and calling the shots. Every second guy at chic bistros like Novikov could’ve been a high-profile oligarch buying and selling football teams and hanging around with international popstars. In fact, we managed to chase the most-feared Mafia boss in Russia, as he came alongside in an electric blue bulletproof Bentley recognised by all, with his bodyguards following closely in their bulletproof black vehicle. Our awestruck local friend said these two cars didn’t follow traffic lights or rules, they just cut lanes and lights, parked where they felt like, without anybody having the guts the stop them. We watched the gangster from a safe distance: he walked like Salman Khan and dressed like Ranveer Singh. “He gets 10 per cent of every deal in the massive port… which he shares with the big boss, of course.”

Dissent? What dissent? Persecuting political critics, killing activists and torturing intellectuals is talked about in whispers. I asked about Alexei Navalny, Russia’s most celebrated Opposition leader who survived an attempt to poison him, and I was immediately sssshed. “If they wanted to assassinate him, they would have done it by now.” Or, as Putin’s supporters said at the time: “We would have finished the job.” Well, Navalny’s YouTube channel has a subscription base of 6.5 million. As a staunch Kremlin critic, his widespread popularity is his only armour.

There’s something about Putinji. He’s hot! I am definitely crushing on the Moscow Monster! At 5-ft 6-inches, he can be labelled a man with an average height, but so strategic and smart is his image management, he is projected as an invincible, towering Spartacus-like figure who wrestles with tigers and rides wild horses barebacked into icy waters. He’s the same man Joe Biden called a “killer” not so long ago. And was boldly confronted by Rachel Scott, an ABC news correspondent, who looked Putin in the eye and asked: “What are you so afraid of?” For the record, she is still alive!

“The task of the government is not only to pour honey into a cup, but sometimes to give bitter medicine.” Yup. A few shots of vodka can also help!

And just to make you feel a little better — hamarey paas 4G/5G hai! Russia is still a 3G country. I loved my time there, but came back singing: “Phir bhi dil hai Hindustani…”