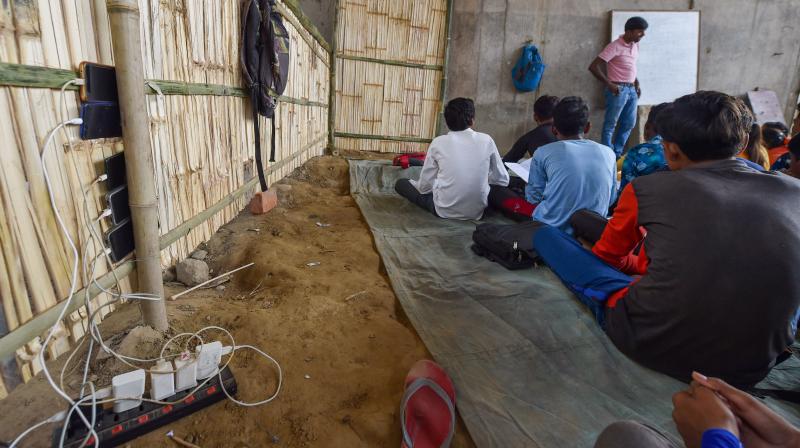 It is important to understand the performance of Telangana in education. PTI Photo

A lot has been deliberated on the transformative potential of the recently issued National Education Policy (NEP).

The policy that has stood out for introducing sweeping changes in school and higher education is a boon for Telangana where it will improve learning outcomes, especially for socially and economically vulnerable students.

It is important to understand the performance of Telangana in education.

The performance grading index used by the ministry of education ranks Telangana at 17 out of the 37 states and Union territories in 2018-19. The broad-based metrics included learning outcomes and quality, access, equity, infrastructure and facilities, and governance processes.

Telangana was ranked 30th in infrastructure and facilities and 20th in access. It also performed below-par in two other parameters — learning outcomes and quality, and access to education.

The National Achievement Survey, conducted by NCERT, too, revealed that the performance of Telangana students from classes five to eight as poorer in comparison to students from other southern states. Even the Comptroller and Auditor General in its audit report in 2018 pulled up Telangana, where 14-26 per cent of primary school students and 21-47 per cent of upper primary school students scored less than 40 per cent between 2014 and 2017.

It is thus imperative for Telangana, which is financially well endowed, to implement the NEP.

The NEP understands the critical importance of good quality childhood care and education (ECCE). Experts believe that over 85 per cent of a child’s cumulative brain development occurs prior to the age of six.
By bringing ECCE to the centre of education with an explicit focus on building foundational and numerical skills for every child by end of Grade 3, a quantum improvement in learning outcomes is expected.

The NEP also aims for a holistic, comprehensive education as it breaks down prevailing insularity by introducing the 5+3+4+4 system of school education.

The NEP further strikes the right chord in terms of equity and access. Schools are often regarded as the second home in a child’s life and this will thus, in turn, build an inclusive and empathetic society.
In both domains of school and higher education, the NEP has opted for restructuring of the system in terms of curriculum, pedagogy and recreational opportunities to prevent any form of exclusion or isolation of disadvantaged communities.

The NEP aims to provide food and nutrition in terms of breakfast and midday meals in government schools. This will encourage parents of children, who often have to make their child work for their next meal, to send them to school.

Another striking example to improve equity is the attempt to include the mother tongue as the medium of both educational and vocational education. By including regional languages, in this case Telugu, as a medium of instruction, NEP 2020 strives to focus the child’s energies on learning concepts rather than a new language.

The NEP also acknowledges special mechanisms required to ensure that children belonging to tribal communities receive the benefits of these interventions. The decision to promote tribal languages will contribute to their educational empowerment.

Telangana has at least 10 districts with scheduled areas and children belonging to Lambada, Koya, Gond, Yerukala, Chenchu and other communities will stand to benefit.

One of the reasons for poor infrastructure and facilities of schools is lack of funds with states. The NEP stipulates the Centre and states work together to increase public investment in the education sector to six per cent of GDP.

The Telangana state government’s budget allocations to education for the 2020-21 fiscal saw a reduction from previous allocations. This is of major concern given that data recorded by the 2011 census shows Telangana’s literacy rate as 66.4 per cent, much below the national average of 74.4 per cent.

Lastly, the NEP has proposed sea changes in higher education that will better align with the needs of a changing employment market. Telangana has a Gross Enrollment Ratio (GER) of 36.2 per cent. The NEP issues a bold call for enhancing GER in higher education including vocational education to 50 per cent by 2035.

By 2030, the NEP aims to have at least one large multidisciplinary HEI in/near every district. Aspirational districts in Telangana such as Jayashankar Bhoopalpally, Kumarambheem Asifabad and Khammam will benefit.

Education is a concurrent subject and this stipulates the collaboration of both the Centre and the state to enact proposed reforms. State governments will also now need to act in a manner in which we can truly usher in the vision of India as a “knowledge powerhouse” as envisaged by the Prime Minister.

This is an opportunity that the state of Telangana cannot afford to miss at any cost.