Mohan Guruswamy | 1962 lesson: How march of folly led us to disaster

The Indian Army was under pressure, but Gen. Thapar was still not prepared to bow to sheer stupidity 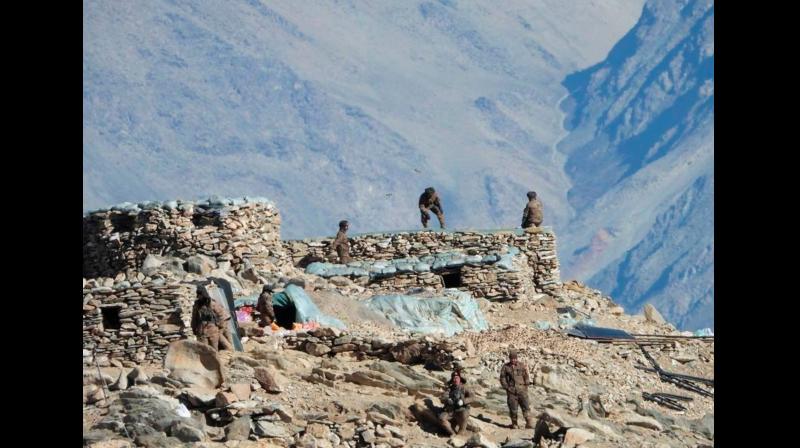 On September 8, 1962, units of China’s People’s Liberation Army had surrounded a small Indian Army post at Tsenjang on the northern bank of the Namka Chu stream just below the disputed Thagla ridge at the India-Bhutan-Tibet trijunction. Representational Image. (Twitter)

Another Septe-mber 8 is on hand.  It’s a day that must always be remembered in India for the march of folly that took us into a disaster. It was the beginning of our greatest shame. We must wonder if we have learnt any lesson. Have things really changed?

On September 8, 1962, units of China’s People’s Liberation Army had surrounded a small Indian Army post at Tsenjang on the northern bank of the Namka Chu stream just below the disputed Thagla ridge at the India-Bhutan-Tibet trijunction. The Indian post came to be established as a consequence of the asinine “Forward Policy” which was adopted by the Indian government after the Sino-Indian border dispute began hotting up, particularly after the flight of the Dalai Lama to India.

TheChinese couldn’t have chosen a better place than Tsenjang to precipitate a military conflict with India. For a start, Tsenjang was north of the de facto border, which at that point ran midstream of Namka Chu. The PLA also commanded the high ground. By surrounding Tsenjang, the Chinese had now flung the gauntlet at India. India walked right into it, chin extended.

On September 10, then defence minister V.K. Krishna Menon conveyed his decision that the matter must be settled on the field, overruling the vehement objections of then Army Chief Gen. P.N. Thapar. Gen. Thapar warned that the Chinese had deployed in strength and even larger numbers were concentrated at nearby Le, very clearly determined to attack in strength if need be. He warned that fighting would break out all along the border and that there would be grave repercussions. But orders are orders, and consequently the Eastern Command ordered Brig. J.P. Dalvi, commanding 7 Brigade, to “move forward within 48 hours and deal with the Chinese investing Dhola”. Having imposed this order on a reluctant Army, Krishna Menon left for New York on September 18 but not before slyly conveying to the press that the Army has been ordered to evict the Chinese from Indian territory. Prime Minister Jawaharlal Nehru too was abroad, having left India on September 7 only to return on September 30.

The Indian Army was under pressure, but Gen. Thapar was still not prepared to bow to sheer stupidity. On September 22, at a meeting that was presided over by deputy minister K. Raghur-amiah, Gen. Thapar once again warned the government of the possibility of grave repercussions and now demanded written orders. He received the following order signed by H.C. Sarin, then a mere joint secretary in the defence ministry: “The decision throughout has been as discussed at previous meetings, that the Army should prepare and throw out the Chinese as soon as possible. The Chief of Army Staff was accordingly directed to take action for the eviction of the Chinese in the Kameng Frontier Division of NEFA as soon as he was ready.”

Under the previous Army Chief, Gen. K.S. Thimayya, the Indian Army had developed a habit of winking at the government’s impossible demands often impelled by its fanciful public posturing. The posturing itself was an outcome of the trenchant attacks on the government in Parliament by a galaxy of MPs. One particular MP, the young Atal Behari Vajpayee, was particularly eloquent in his quest to put Jawaharlal Nehru on the defensive. He and others like Lohia, Kripalani and Masani would frequently thunder that every inch of sacred Indian territory must be freed from the Chinese and accuse the government of a grave dereliction of its duties. They knew little, for then as it is even today, the government kept them ignorant of the facts. Clearly, there is a lesson here on how to deal with matters of grave national importance.

Nehru fell to these pressures by initiating the stupid Forward Policy and resorting to the use of more extravagant language to signal his own determination to India’s public and quieten the Opposition. A general summed up this policy succinctly by writing: “We would build a post here and they would build one there and it became a bit of a game, to get there first!”

Jawaharlal Nehru returned on September 30 and was furious that the Chinese were still not thrown out from the Thagla ridge. He was tired of the Indian Army’s refrain of grave repercussions. He shouted at the hapless Army Chief: “I don’t care if the Chinese came as far as Delhi, they have to be driven out of Thagla.” Unlike Gen. Thimayya, Gen. Thapar was less understanding of the government’s compulsions and hence took its orders far more literally and seriously than it deserved.

Within the Indian Army there were serious reservations on the efficacy of the government’s orders. The GOC-in-C, Northern Command, Lt. Gen. Daulat Singh, warned the government that “it is imperative that political direction be based on military means”. The 33 Corps, which was responsible for the sector, sent its candid opinions on the order. Its Brigadier General Staff, Jagjit Singh Aurora, who later won enduring fame as the liberator of Bangladesh, called up his friend Brig. D.K. Palit, then director of military operations, and berated him for issuing such impractical orders. Not only were the Chinese better placed in terms of terrain, men and material, the Indian troops were woefully ill-equipped, ill-clothed and had to be supplied by mule trains or airdrops. They were acutely short of ammunition. The objective of evicting the Chinese from Thagla itself was of no strategic or tactical consequence. The nation clearly needed a greater objective to go to precipitate an unequal war.

The government’s reaction was a typical instance of political and bureaucratic chicanery and cunning. It ordered the establishment of the 4 Corps, culled out from 33 Corps, and appointed Maj. Gen. B.M. Kaul, a Nehru kinsman who never commanded a fighting unit before. He was a creature peculiar to Delhi’s political hothouse and adept in all the bureaucratic skills that are still in demand in our nation’s capital. He had the Prime Minister’s ear, and that’s all that mattered.

Governmental decision-making is still characterised by ad-hocism and a tendency to grandstand. It was this tendency that cost us so many lives in Kargil 1999, when we went into quick battle mostly to assuage public opinion and for domestic political gain without thinking through tactics. Have we done any better in Ladakh last year? It’s only the unquestioning soldiers of the Indian Army who will still charge like the Light Brigade!