The 2019 Lok Sabha elections was high noon for the BJP 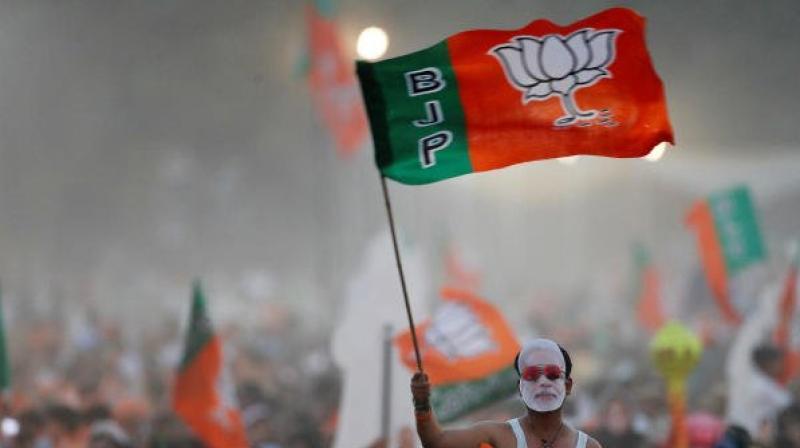 The political space in the BJP’s simplistic construction is divided into territories where the saffron tide has swept away the debilitated Congress and others where the dysfunctional and rudderless party is barely hanging on to power, awaiting the moment when it will succumb to its internal problems and sink out of existence. On the fringes there are states where regional parties hold sway, but being outliers their capacity to obstruct the BJP’s agenda of Hindutva hegemony is limited.

Paralysed by its failure to solve the leadership problem, the Congress is indeed doing its best to wither away, after its 2014 and 2019 defeats and the installation of Narendra Modi as Prime Minister. It can neither deny there’s a leadership vacuum after Rahul Gandhi quit as Congress chief in 2019, nor can it decide who will lead it and when interim president Sonia Gandhi will step down?

The question is even if the Congress dwindles into a “signboard”, as Mamata Banerjee once famously declared about its future in West Bengal after her 2011 triumph, will India indeed be liberated from the Congress or will it survive, depleted and diminished in its capacity to represent voters who believe in its ideology but powerful and pervasive as a legacy of a vision of India that rejects and resists the Hindutva reconstruction of the State and the nation?

Liberating Bharat from the Congress is a BJP pipedream. For as long as India is an elected democracy, however flawed its elections may be and however restrictive its democracy, the Congress as a party and legacy will continue to influence and shape politics. As an idea and as a party, the Congress represents the middle ground. Median voters, and they are the majority in every robust democracy, usually converge in the middle and prevent politics from tilting too far to the Right or Left.

The 2019 Lok Sabha elections was high noon for the BJP. It seemed the centre or middle ground in politics had given way and the hard religious right had taken over. After 2019, the BJP hasn’t acquired any significant new territory. Its West Bengal defeat was much a rejection of its ideology as was the equivocal mandate in Maharashtra where the Maha Vikas Aghadi government led by the Shiv Sena, with the support of the Congress and Sharad Pawar’s NCP, has reigned since 2019. These are pointers that a far-right swing in politics in India makes voters uneasy.

Over-interpreting the Bhowanipore byelection result is risky; yet it is noteworthy. Seventy-two per cent voters preferred Mamata Banerjee, which indicates the BJP’s voteshare has declined in a constituency where it had hoped to win in May, and hadn’t expected a rejection now. The middle-class median voter is signalling its disapproval of the BJP loudly and clearly. The implication is even if the Congress is reduced to a signboard, the middle ground in Indian politics that it represented is showing signs of reasserting itself by choosing an alternative, Trinamul Congress, which bears the legacy of its origins within the Congress.

The middle ground is now open for anti-BJP consolidation and the Congress can save itself from being extinguished by jumping on board, instead of claiming the lead role. The Congress and regional parties occupy this middle ground as voteshare numbers indicate. A shrivelled- up Congress with 19.5 per cent votes in 2019 and the mosaic of parties in opposition to the BJP represent over 55 per cent of voters who took part in the 2019 and earlier elections. The maths speaks the truth to the BJP’s claims of representing the majority in Bharat.

In the collective wisdom of the middle class, the middle of the road, median voter who tends to shy away from extremes, the BJP is not the party of choice, neither in the 2019 Lok Sabha elections or even before that, nor in subsequent state elections. Surveys of how voters are making choices indicate that the BJP’s voteshare has declined from the all-time high of 37.4 per cent. There are reasons for this erosion. Regardless of how questions are framed for the polls and surveys, voter dissatisfaction with the Narendra Modi government is on the uptick, visible in the noise and fury of social media chatter and election outcomes since 2019.

However, the maths does not reveal how the political parties who represent the middle of the road voter can change the dynamics and convert themselves from a fractured and fractious Opposition into a credible challenger to the BJP’s behemoth.

The convention of interpreting the play of politics in India requires the Congress to be a sizeable national party with an organisation to match and a presence across India measured in terms of the number of state governments the party heads and the number of MPs in the Lok Sabha. As the oldest national party, the Congress is expected to be either the party in power at the Centre or the party waiting to win and reoccupy the Centre.

The interpretation is based on the idea that at the “national” level, the playoff is always between two national parties, with the regional parties adding limited heft to make up deficits in terms of the numbers required for a majority in the Lok Sabha. In this version, since regional parties regardless of their local strength represent only a fraction of the seats needed to make up the Lok Sabha majority, they can’t be taken seriously as claimants to the role of challenging the Narendra Modi-led BJP in the 2024 general election.

The number of uncertainties makes it difficult to guess how anti-BJP politics will shape itself and whether it can figure out a way of credibly challenging the BJP in 2024. What is even more difficult is to figure out how the multiplicity of parties, almost all of them regional entities, will confront the BJP and loosen up the support it enjoyed among voters in crucial states like Uttar Pradesh. The maths suggests that competition among anti-BJP parties, including the Congress, in states like Goa, Uttar Pradesh, Tripura, Punjab and Gujarat, will make it easier for the BJP to win and so prepare the ground for Mr Modi’s third term in 2024.

However, what is intriguing is the way regional parties, especially Mamata Banerjee, are making a dead set on acquiring Congress assets and so blocking the BJP from adding to its voter base diversification drive. By picking up pieces of the crumbling Congress, regional parties are effectively reconstructing the middle ground and reshaping the centre in Indian politics.