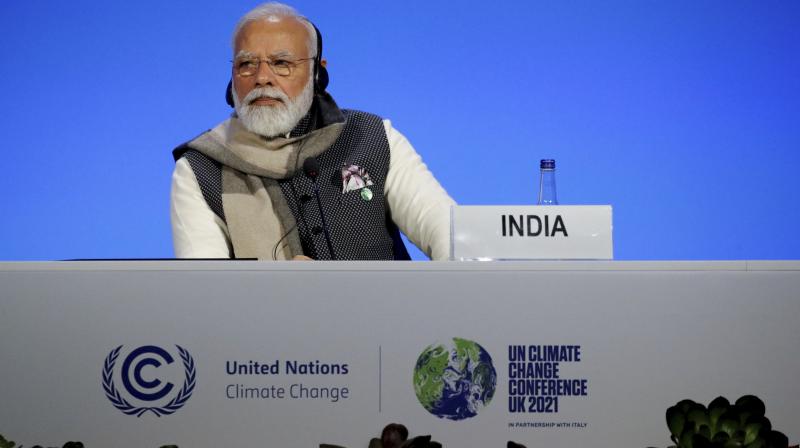 Pared of its rhetoric-as-usual toolkit, Prime Minister Narendra Modi’s quantitative commitments at the UN’s Conference of the Parties 26 (CoP26) in Glasgow earlier this month require a closer look than usual. Of the five key commitments, the first one about “net zero” carbon emissions by 2070 remains a distant target as of now though there would be a need for policy initiatives to be able to meet the target half a century later. The detail about a “net zero” carbon economy is that the quantity of carbon emissions is matched by carbon mitigation. The carbon emissions may increase proportionately by 2070 but there would be a need for technologies to remove the equivalent quantity through low-carbon processes in one sector — for example, generation of electricity — to balance the increase in carbon emissions in another —  for example, the manufacturing sector.

What seems to be an eyesore for experts looking at different energy scenarios in India is that the use of coal would peak in 2040, or later in 2050, before the tapering would begin, and it could reach its minimal phase sometime by 2060 or 2070. The Indian economy will grow and expand in the decades to come, and coal will remain the mainstay of the country’s economic growth. It is an important detail to keep in mind.

The climate warriors, either in India or elsewhere in the world, will find it difficult to argue against it though they may want to curb the use of coal, if not eliminate it completely. And in their partisan zeal, some of them may argue for a “no coal” climate agenda. When policymakers with climate change imperatives on their mind speak and write, they remain silent on coal, which turns out to be the proverbial elephant in the room.

In all the future projections of the Indian economy this century, analysts foresee a huge expansion in the steel and cement industries, which will depend mostly on coal as the main energy source, and automobiles that depend on crude oil sources. The electric car at a mass level is still in the future, and it is projected that by about 2070, 80 per cent of cars in use would be electric. The argument is that India has not reached the peak levels in its carbon emissions, and that it will reach it between 2040 and 2050, and so will the consumption of coal and oil.

The other major feature of the Indian economy in the next 25 years and more will be increased urbanisation, and therefore construction will be a boom sector. Urbanisation would also mean an increase in consumption of electricity, and it will be a great challenge for the renewable sources to be able to undertake the supply of electricity to the urban centres where about 750 million people, or 50 per cent of the population, are expected to live. It is also seen as an opportunity for energy-efficient electric appliances and gadgets and green-friendly buildings. And urbanisation would also increase the demand for automobiles. The idealistic solution would be an increase in the share of public transport. But that cannot be achieved unless there is an imaginative urbanisation policy. The Narendra Modi government is quite enthusiastic about energy-efficient public buildings, but this enthusiasm must spread among the construction companies that will be building entire cities. There is no clear blueprint for a smart city except that of using LED bulbs and improved public transport running on CNG. The increased consumption of gas creates its own market dynamic of supply and pricing,

When the BJP and Mr Modi came into office for the first time in 2014, they were quite enthusiastic about shifting rural population to cities as a way of dealing with rural distress and raising people out of property as did China. But the Prime Minister now seems to want to keep the people in the villages and provide them jobs in their present locations. This has been a key consequence of the Covid-19 pandemic, where overcrowded cities had become hotspots of the pandemic.

It is the rise in renewable sources of energy like solar power and wind that should enable India to keep its carbon emissions’ balance within the 1.5 degrees Celsius frame of temperature rise by 2100. Mr Modi and his advisers seem to have done some back-of-the-envelope calculations that promise that a steady rise in the renewable energy component will help in keeping the carbon emissions management within the limits. The Prime Minister has made two promises on the renewable energy front. One is that of increasing the share of the renewables in the energy basket to 50 per cent by 2030. This looks a reachable goal because the share of renewables stands at 40 per cent, of which hydro is 12 per cent, and solar and wind account for 26.1 per cent. Nuclear power remains a negligible factor.

Despite the government’s intent to push for renewables, the investments and credit facilities needed for the sector to pick up pace are just not there. The renewables compete for the same pool of available bank credit like coal. While the industry and service sectors have the lion’s share in bank credit, that of the energy sector remains just 10 per cent. Similarly, there is a bottleneck on the supply front.

Until now, there have been too few Indian manufacturers of photovoltaic cells. It is only that domestic manufacture is being encouraged. To connect solar and wind energy to the power grid both at the local and national levels poses the challenge of storage, and the battery technology which is needed for this is still at the developmental stage.

It is inevitable that even as India emerges as an important global player in dealing with climate change challenges, and Mr Modi has tried well to keep India’s interests in mind and the inescapable Indian responsibility to the world at large, the commitments he made in Glasgow look modest, a bit timid even.

But the problems are too huge, and though India is a major player its economy is simply not big enough to lead the battle. And India is also not the leader in technology to offer the solutions that are needed. Prime Minister Modi has recognised the opportunity for India to play the global leader. But his hands are tied by India’s narrow base of knowhow.