Yemen’s Saleh paid back for his misdeeds

Saudi media routinely refers to the Houthis as Iranian militias, which is plainly inaccurate. 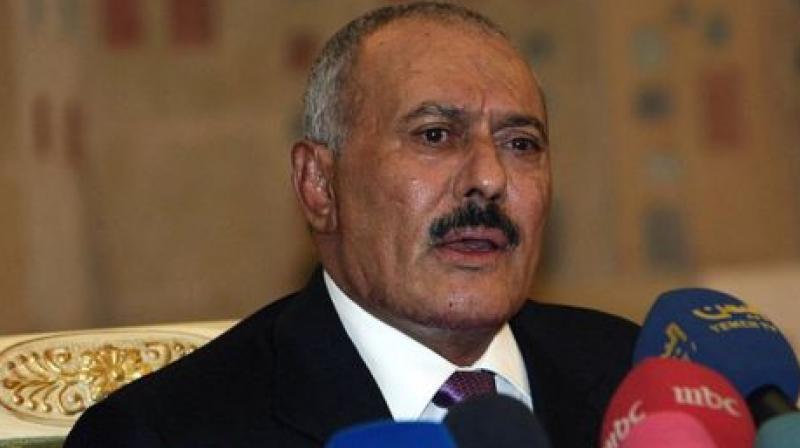 Ali Abdullah Saleh survived several assassination attempts during his decades at the helm in Yemen, but the former President’s luck ran out on Monday.

It remains unclear whether he was killed in a firefight or summarily executed by his, until very recently, Houthi allies as he fled Sanaa, the Yemeni capital. It remains to be seen precisely what effect his sudden excision from the scene will have on the devastating war in the country he led for more than 30 years.

Saleh was no stranger to switching sides. In fact, it was something of a habit with him. He allied himself firmly with Saddam Hussein in the 1990s, only to succumb to the lure of American largesse following the USS Cole attack by Al Qaeda affiliates in 2000 and even more notably post-9/11, with US agencies allowed free rein to pursue their prey via drones. Perhaps it’s no coincidence that Al Qaeda in the Arabian Peninsula (AQAP) was subsequently designated as the deadliest arm of Osama bin Laden’s outfit.

As a young soldier, Saleh fought on the side of the Yemeni republican forces backed by Egypt’s Gamal Abdel Nasser against the Saudi-supported forces of regression in the 1960s, but as President he slipped in and out of Saudi favour. The kingdom expelled 800,000 Yemeni workers in retaliation against Saleh’s support for Saddam, but it did not want him gone when the Arab Spring reached Sanaa in 2011. Saleh was eventually persuaded to make way for his vice-president, Abdrabbuh Mansour Hadi.

During Saleh’s extended tenure as President, his energies were frequently devoted to combating Houthi rebels, so it was something of a surprise when he aligned his forces with theirs in the fight against Hadi and, latterly, the Saudi-led military coalition spearheading Operation Decisive Storm. But, at the same time, he tentatively kept open channels to Riyadh and Abu Dhabi, and UAE diplomats are believed to have been instrumental in persuading Saleh to reconsider his allegiances yet again.

Analysts fear that the removal from the scene of a perennial player will intensify the conflict, with both Saleh loyalists and the Saudis, who had hailed the ex-President’s betrayal of his latest allies as a breakthrough, hungry for revenge. The short-term consequences may indeed conform to that scenario. But the bigger picture of the region’s richest nation devoting a substantial proportion of the firepower it readily obtains from the US, Britain and France to punishing its poorest neighbour remains unaltered.

Saudi media routinely refers to the Houthis as Iranian militias, which is plainly inaccurate. The extent of Iranian involvement in the conflict may have increased, but citing it as the main reason for pursuing the aggression was always fallacious. And let’s not forget that the Saudis and Emiratis expected Pakistan to jump at the chance of providing human fodder for the war.

Pakistan demurred, much to their dismay. But it provided a chief, in the shape of Raheel Sharif, for the so-called “Muslim Nato” that Bin Salman subsequently drummed up, which could only be intended, in the medium term, to serve as a force dedicated to the obstruction — or destruction — of Iranian influence in the region. And, however deleterious one might assume Iran’s role and ambitions to be, could they conceivably be worse than Saudi designs — which lately have been closely aligned with the Trump-Netanyahu playbook, not least in respect of Palestinian fortunes?

What role, if any, the ‘Muslim Nato’ might be playing in Yemen is, conveniently, unknown. What is well known, on the other hand, is the extent of the humanitarian catastrophe the conflict has spawned, including the worst cholera epidemic of modern times, and famine on a scale that puts Syria in the shade. A considerable proportion of the blame for these crimes against humanity can only be attached to the future custodian of the holy shrines and his blinkered allies. Saleh’s departure from the scene may not turn out to be an immediate boon for Yemen, but his considerable responsibility for its horrendous fate can hardly be denied.