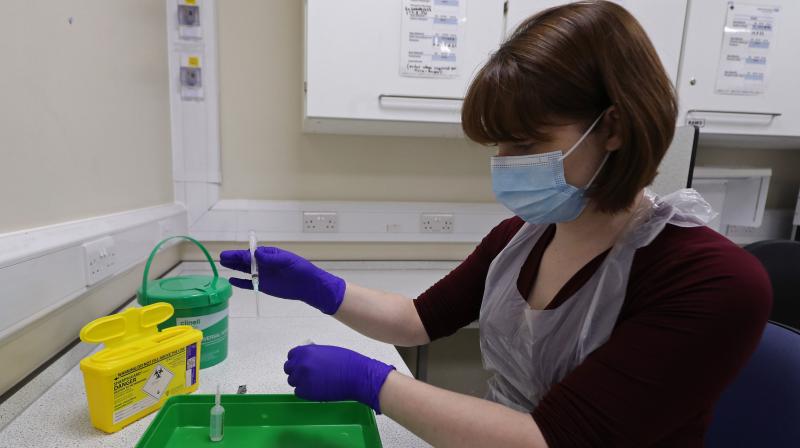 An NHS pharmacy technician simulates the preparation of the Pfizer-BioNTech coronavirus vaccine, during a staff training session ahead of the vaccine's rollout next week, at the Royal Free Hospital in London on December 4. (Yui Mok / POOL / AFP)

But the problem is how to keep the virus from spreading during these last few weeks — and once again rules, regulations, etc., are being trotted out. As always these have raised levels of dismay. But a week is a long time in politics — and from being one of the most unpopular prime ministers for imposing restrictions — “lucky” Boris is now shooting up the popularity charts!

Who even remembers that just last Monday Parliament debated legislation about imposing a system of tiers in different parts of the country to replace the lockdown? This was so unpopular even among Tory MPs that Boris Johnson faced the worst backbench revolt of his year long Premiership. Fifty-six Tory MPs voted against the government. Had Labour Party and Scottish Nationalists also voted against, the government would not have been able to impose the tiers.

Yet the very next day came the good news that the Pfizer vaccine was ready and had won its approval from the UK regulators. Someone had the foresight to book forty million of these vaccines for us. So the Prime Minister was pulled up from the depths of defeat to a sense of being the first off the starting line! UK had once again beaten the world!

A list has been quickly drawn up of who has priority for receiving the first round of shots. The vaccines have to be kept at -70 degrees C so the logistics are tricky. They also arrive in packages of 975 so only hospitals can deal with such large numbers. As of now care home patients and frontline workers have top priority. Then comes the turn of the NHS staff followed by the over 80s and then down the age ladder. Fortunately, thanks to the NHS — there are detailed lists of everyone — their addresses and even who has what illness. This will make the task easier.

Fortunately, unlike in India, the VIP system does not apply here. While I am worried about whether my father at 97 will get the vaccine in India (as he should be in the first list), in the UK everyone awaits their turn, and Parliamentarians and other VIPs are not a priority. And even the Queen, at 94, will wait to receive it, when her turn comes. This is always reassuring.

The triumph of UK being first in the world among the ‘vaxxers’ did not go down well with everyone. Tory Ministers could not help boasting that it was thanks to Brexit that UK could be the first, leaving the EU behind — as all of Europe will get it at the same time.  The EU regulators then retaliated by casting some doubts on the early bird decision of the UK regulators. Had corners been cut? Then the Americans joined in. Dr Fauci, hitherto the hero for standing up to Donald Trump,  said the US regulators would take longer to approve. But he later added  that he did not doubt the decisions of the UK regulators.

However, just when things were beginning to look rosy, the Brexit crisis has resurfaced. A deal has to be signed by end of December. Otherwise UK exits Europe without a deal. If that happens, lorries going from here to Europe across the Channel as well as EU lorries coming to UK will need to fill in many forms and pay tariff on the goods. Some people predict queues of lorries stretching for miles at the ports. Apart from the delay, it will play havoc with social distancing. It may even delay the vaccines arriving from Brussels. So it is a delicate few days of negotiations before the 27 nations of EU unanimously approve of the Brexit deal. Will ‘lucky’ Boris swing it again?

There is already huge excitement over Christmas. Decorations are up and going by the crowds thronging into Harrods — it seems Christmas has come early. This is the vaccine effect — though Oxford Street lights are a bit dim because several well known stores have gone into administration together. Arcadia, a consortium of well known brands such as Top Shop, Top Man, D H Evans, Miss Selfridge  Burton, Dorothy Perkins, was owned by Sir Philip Green — a billionaire who lives on a yacht in the South of France. He has refused to rescue these shops and 13,000 employees will be made redundant. As a consequence Debenhams which has been on the High Street across the country since 1778 has also gone bankrupt with 12,000 employees losing their jobs. No “Merry Christmas” just a silent night for them. But this has also meant that it is a shopping bonanza for all those who have been at home for far too long. And so yes, those long queues you see in London are not for the vaccine — but to pick up some great discounts from the shops which are closing down. Ironically— the biggest profits will be made just before the cash registers stop ringing!