Sanjaya Baru | Nirmala’s Budget made a virtue out of necessity

Sanjaya Baru
Sanjaya Baru is the author of The Accidental Prime Minister: The Making and Unmaking of Manmohan Singh

Declaring boldly to Parliament a fiscal deficit ratio to national income of 9.5%, the finance minister made a virtue out of necessity 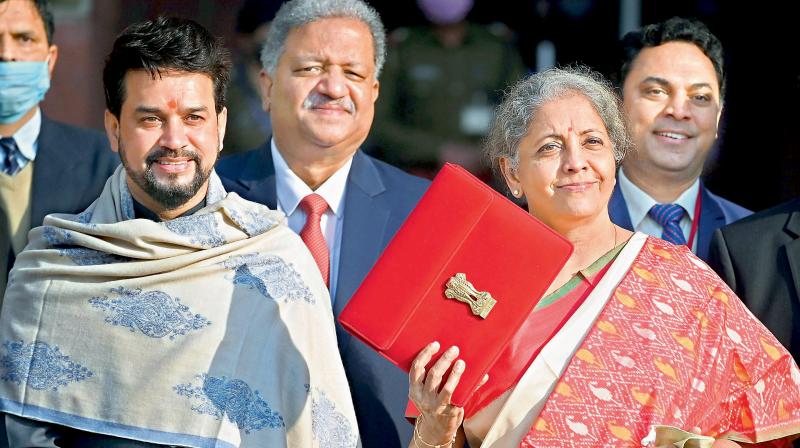 This budget was the one real departure from past practice, apart from the decision to recreate a new development financial institution and an asset reconstruction company. (Photo: AFP)

Union finance minister Nirmala Sitharaman had promised a “once in a century” Budget and raised hopes sky high. It is a commentary on the state of expectations in the country that few took her at her word. Despite her hype, the expectations were generally low mainly because it was widely known that the government’s revenues had collapsed due to the Covid-19 pandemic economic lockdown, leaving the finance minister with little fiscal margin for policy manoeuvre. Rather, some people were worried that she would be tempted to raise revenues to be able to redistribute to the victims of the lockdown and enhance support for healthcare. Few were prepared for the fiscal rabbit that Ms Sitharaman pulled out of her Budget folder.

To begin with, having fired a salvo at the sovereign credit rating agencies for being out of date and out of step, putting them on the defensive on their fiscal conservatism, the finance minister took a leap of faith and reneged on the Fiscal Responsibility and Budget Management (FRBM) Act 2003. Ms Sitharaman was able to dump FRBM with elan thanks to the moral support she got from two other women -- Kristalina Georgieva, the Bulgarian managing director of the International Monetary Fund, and Gita Gopinath, the IMF’s liberal-minded chief economist who was briefly an adviser to Kerala’s Communist chief minister Pinarayi Vijayan.

The IMF has gone through an ideological somersault after the 2008-09 trans-Atlantic financial crisis, when it looked the other way as Western governments chose to spend their way out of crisis. In the post-Covid season the Fund has actively supported growth-promoting fiscal easing by governments. This change in global fashion would have given Ms Sitharaman additional courage to come out of the fiscal closet, so to speak. Declaring boldly to Parliament a fiscal deficit ratio to national income (gross domestic product) of 9.5 per cent, the finance minister made a virtue out of necessity.

This was the one real departure from past practice, apart from the decision to recreate a new development financial institution and an asset reconstruction company. On most other fronts she has done more than her predecessors but walked a well-laid out path -- be it increasing the share of foreign direct investment in insurance or planning for a larger disinvestment package. Even outright privatisation has been done before. Ms Sitharaman just wants to do more of it.

The other departure from the past which the middle and business class welcomed was her decision not to levy any new taxes. If the government had raised tax rates after a year like the one gone by it would have been rubbing salt into salary-earners’ wounds. Indeed, the higher fiscal deficit ratio is a direct consequence of both the decision to come clean on facts as well as the decision not to raise revenues through new taxes. The only real impost on consumers this past year has been the increase in fuel prices. That would have raked in some revenue.

A critical assumption of this Budget is that its programme for disinvestment and privatisation would proceed apace with no difficulty. This is easier said than done. While Prime Minister Narendra Modi may not yield to the trade unions’ protests, just as he has refused to yield to the farmers’ protests, the disinvestment-privatisation drive will critically depend on investors’ interest. The inability to sell Air India despite years of trying is a reminder.

So, was the generally positive response of the markets, investors and households a consequence of a “no tax-more spending” Budget? Some of it, yes. But a large part of the positive response had to do with the feeling that finally the Narendra Modi government is coming to grips with the economic reality. The bottom line is that this government’s management of economic policy has been below par. If Prime Minister Modi had not whipped up nationalist and communal sentiment in the run-up to the 2019 general election and if the Opposition parties had a better strategy for keeping the government’s shortcomings in focus, the Bharatiya Janata Party would not have got the numbers it did purely on the basis of its economic performance during its first term.

In 2014 many hoped that Mr Modi would turn India into a Gujarat, in terms of development, but by 2019 the worry was that the nation was going in the direction of Uttar Pradesh. On top of its poor record of economic management in its first term, Mr Modi began his second term with budgetary policy initiatives from which he had to quickly withdraw. In the process the Union finance secretary, who was picked by him, had to go, following an earlier exit by a Reserve Bank governor who was also his choice, and a Gujarati to boot. Ms Sitharaman’s second Budget too did not help to lift the economy or her reputation, partly due to the Covid-19 pandemic and the lockdown.

So, given the low expectations, the Budget speech came as a pleasant surprise for investors and the markets. Whether it would leave them, the middle classes and the working classes, happier at the end of the year depends crucially on two parameters -- employment and inflation. If the positive reaction of businesses and investors translates into new employment opportunities and the inflationary consequences of the liberal fiscal policy are contained, Ms Sitharaman would have left the economy in better shape than what she inherited.

When Prime Minister Manmohan Singh had invited me to write his speeches, he had just two words of caution and advice for me. No hyperbole, he warned, and reminded me of his dictum: “Promise less and deliver more”. Dr Singh gained in stature as a consequence. In the past six years, Prime Minister Modi has promised more and delivered less, in terms of economic growth. He risks losing in stature as a consequence. If the Indian economy has to grow to become a $5 trillion economy, sooner than later, Mr Modi needs to remain focused on the policies that promote growth, and not allow the base instincts of his core constituency to distract the country.