Fascism has a strange fascination with architecture 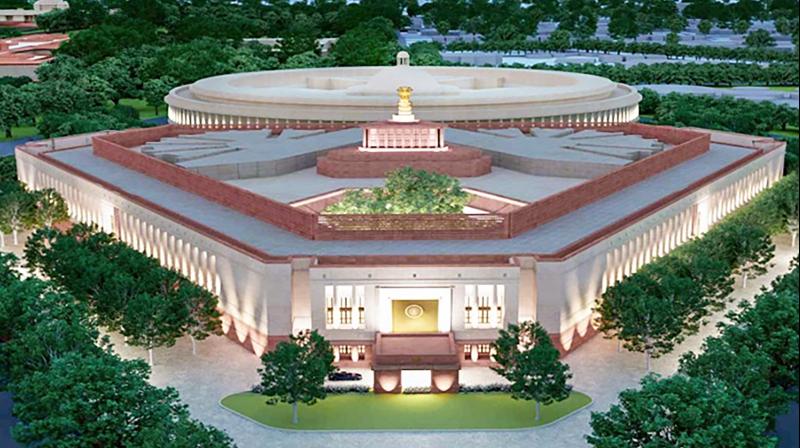 Modernity with all its commitment to freedoms and reason is sought to be subordinated by monumental architecture to the will of the fascist state. (Photo: PTI)

Fascism has a strange fascination with architecture. The moment the Nazis rode to power in 1933 Herr Hitler started unveiling his plans for building a new capital for his thousand-year Reich.

To be named Germania it envisaged the grand redevelopment of Berlin.
From the mid-1920s itself much before power ever loomed over the horizon Hitler fantisised about his blueprint for Germania. It finds a prominent mention in his book called the Mein Kampf. Hitler had even prepared the drafts of the grandiose monuments that he proposed to erect. In his mind’s eye Adolf Hitler in addition to being The Great Helmsman was also the immortal designer.

In the spring of 1936, Adolf Hitler commissioned his pet architect Albert Speer who later became his minister of armaments to execute his vision and construct “the” megapolis that would be the epicentre of his Reich. Hitler was resolute that the centerpiece of his Nazi dystopia christened Welthauptstadt-World Capital Germania should be completed by 1950. Speer had been the de-facto Nazi architectural director since 1934. He had created a distinct impression on Hitler with his exotic metamorphosis of classical architecture into mammoth but manifestly ascetic Nazi architecture that was designed both to intimidate and overwhelm.

This transfiguration was personified in one of Speer’s initial but key undertakings, the Nuremberg parade grounds laid out for the 1934 Nazi Party Congress. The impact of the classicist architecture of that stadia is intimately captured in an array of propaganda films curated by the Nazi information czar Joseph Goebbels.

It was designed to provide a backdrop to the stunning imagery of militarised discipline of Nazi cadres forming a geometrical aligned corporeal congregation united in their allegiance to the Fuhrer. The political ontology portrayed by the overpowering impact of this architectonic setting is of Being-as-One.

One people, One nation and One Reich, which Hitler emphasized in his oration in that arena. He preached both “complete unity” and asked for blind the obedience of the German nation. Isn’t it eerily similar to the one leader one nation one election rhetoric that we hear these days with elections of course being dispensable even in the medium term?

Hitler’s visualisation was to transform Berlin into Welthauptstadt Germania — the greatest city of them all. However, stripped of sophistry it was at best plagiarism on a malevolent scale. The only originality being cloning and supersizing of the landmark monuments that Europe had on offer then.

These monoliths were to be erected along a seven-kilometre (4.3 miles) Boulevard of Splendours to create an overarching persona of Nazi preeminence on citizens and travellers alike. At the south end of this avenue was to be located the Triumphal Arch six times more humongous than the Arc de Triomphe in Paris. At its north end the concourse was supposed to pan out into a parade ground containing a gigantic Palace for the Fuhrer, the Reich Chancellery, and a gargantuan Grand Hall. Mark the Palace for the Fuhrer.

Hitler perceived monumental architecture as a means of creating a beguiling sense of shock and awe. He was fervent in his conviction that colossal constructions were powerful weapons of projecting political supremacy. For him architecture was not simply the means of giving form to space. It was the virtuosity of creating power through prodigious spatial imagery.

The budget for this vanity project was an estimated 4-6 nillion Reich Marks about 50 billion US Dollars at today’s cost. Hitler dismissed all concerns with regard to the both timing and cost notwithstanding an on going war. For in his megalomaniac existence it was about perpetuating his legacy. The only way of leaving your indelible footprint on the sands of time was by erecting grandiose edifices.

Moreover, the Nazi party was a pioneer in the use of propaganda both during its relentless quest and perpetuation of power. As the Reich minister of propaganda it was Joseph Goebbels’ conviction that “propaganda becomes ineffective the moment we are aware of it”. Inspired by this credo the Nazi Party consciously created a myth about opposing the status quo and presenting its Supreme leader as both, an outsider to the incestuous alchemy of the decadent elite and a radical messiah, ironically while being in bed with the very same set. Does it not contextualise the constant railing against Lutyens’ Delhi and the fabled Khan Market Gang?

Archetypes of this new building got constructed across the Italian peninsula. Stereotypically situated in the town centrum these structures were built to typically dwarf the church’s dominant role in Italian social life. They metaphysically underscored the eternal presence of Il Duce — as Mussolini was called. Antiquity was equally important weapon in the Fascist arsenal. Isolamento as it was known as, involved the valorisation and refurbishment of rhetorically momentous structures.

Monuments as statements, as manifestations of a civilisation and its values and accomplishments, is an impulse that began to fade with the invention of the printing press. The mass-market book, carrying the soul and complexity of a civilisation, became the representative artifact.

The ideas, concepts, aspirations of a people did not need large and expensive agglomerations of masonry to articulate and announce themselves. The written word, the book, cheap and universally available, could do it to perfection.

It is the reason the exemplary founding fathers of modern India did not first, in 1947, move to raze building and raise buildings to announce the dawn of a new freedom and a new covenant of equality and fraternity and justice for all Indians: they chose to sit down, almost three hundred of the very best of them, for almost three long years, to debate and dissect and carve the most important book of contemporary India, the Constitution.

Democrats create festivals of ideas, crusades of justice and equity, carnivals of creativity, in which all may participate, on some kind of equal footing. It is only autocrats and fascists, monarchs and megalomaniacs, who seek statues and monuments to awe their subjects, to bring them to their knees.

Modernity with all its commitment to freedoms and reason is sought to be subordinated by monumental architecture to the will of the fascist state.
This is precisely what we are witnessing with the relentless and profoundly vulgar redevelopment of the central vista in New Delhi (in the middle of a crippling pandemic at an enormous financial cost).

All this bombast of masonry and unbridled arrogance, is one more eternal blunder by a government and a leader who have unleashed untold misery across the country for the last seven years with their terrible decisions. In the final count, in the story of our ancient civilisation, all the grandiloquence of the central vista project will not be worth a single page of the Indian Constitution.