Maura Moynihan | US in turmoil: Is China instigating the violence? 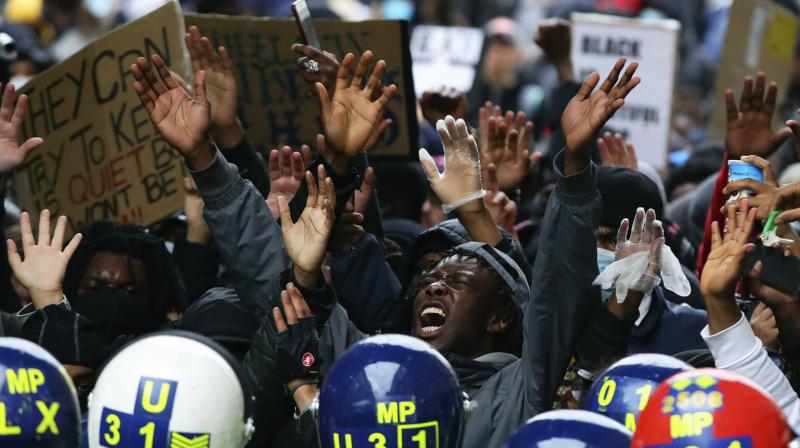 Cities across Europe and elsewhere in the world filled with demonstrations decrying racism in America. AFP Photp

On May 25, 2020, the police in Minneapolis, Minnesota, seized George Floyd, a 46-year-old African American citizen, on the suspicion of using counterfeit dollar bills. Floyd lay on the ground in handcuffs while police officer Derek Chauvin pressed his knee into Floyd’s neck for nearly 10 minutes.

Bystanders videotaped Floyd repeatedly saying “I can’t breathe” before he finally fell silent and was later pronounced dead at a local hospital. Police officer Chauvin was later arrested and eventually charged with murder. Protest marches filled city streets across the United States, calling for an end to racial profiling and police brutality.

On the night of May 31, the protests turned violent in Washington D.C. as a mob torched St. John’s Church (known as the “Church of the Presidents”) in Washington DC’s Lafayette Square, right across from the White House. Violence and looting exploded nationwide, and by June 2, the governors of 24 states had imposed curfews and called in the National Guard.

Cities across Europe and elsewhere in the world filled with demonstrations decrying racism in America. A video went viral on the social media of the men who set fire to St. John’s Church shouting orders in Mandarin, and a Chinese foreign ministry spokesman called the unrest in America “a beautiful sight”.

The acclaimed legal scholar Michelle Alexander, the author of The New Jim Crow: Mass Incarceration in the Age of Color Blindness, details how the War on Drugs, enacted under President Ronald Reagan and greatly expanded under President Bill Clinton, has kept American society shackled to segregation and racial inequality.

“Something akin to a racial caste system currently exists in the United States… mass incarceration in the United States emerged as a stunningly comprehensive and well-disguised system of racialised social control that functions in a manner strikingly similar to Jim Crow” -- laws that reinforced racial discrimination after the end of the Civil War in 1865.

The rapid escalation of violence in recent days has the American media focused mainly on the militarisation of the police, an issue of concern for legislators and civic groups since 1997, when President Clinton enacted the 1033 programme under the National Defence Authorisation Act that transferred surplus military equipment to state and local police departments.

During George W. Bush’s War on Terror, $5 billion in military grade weaponry was donated to domestic police agencies. President Obama expanded this programme with the motto “From Warfighter to Crimefighter”, and added $2 billion to the War on Drugs, the largest budget increase in its history.

In 2012, I had joined thousands of my fellow New Yorkers in a silent march to then mayor Michael Bloomberg’s Fifth Avenue townhouse to protest his “Stop and Frisk” policy, wherein nearly one million black and Latino citizens were illegally detained and harassed by the police, who were under pressure to meet quotas for detainees. Mr Bloomberg was then sued for violations of civil rights and the court ruled in favour of the plaintiffs.

But today’s civil unrest is aggravated by infiltration from a number of extremist organisations, and the economic crisis caused by the pandemic from China -- the Wuhan Virus.

New York City, now in its third month of the Covid-19 lockdown, is under a strict 8 pm curfew after riots and looting had rocked the city. Civic leaders are frustrated with mayor Bill DeBlasio for continually extending the lockdown.

“This has gone on for too long”, said a restauranteur who operates several bistros in Manhattan. “Last month New York flattened the curve for the pandemic, but we keep being told that we can’t reopen. Family businesses are dying while big box stores are allowed to stay open. It’s not fair and it’s killing our city,” he added. A retired police officer said: “We live every day with varying degrees of risk, physical and mental. We mobilised New York City to contain the risk of Covid-19, but if we don’t lift the lockdown soon we risk anarchy, which could be far worse.”

Local organisers say that anarchist groups such as Communist USA and Antifa arrived at the protests equipped with scouts, communications teams and vans filled with rocks and accelerants.

Videos show ordinary protesters refusing to accept bricks and bottles from strangers and denouncing the use of violence. Trevor Loudon, a contributor to The Epoch Times, said: “If the death of George Floyd in Minneapolis hadn’t sparked these riots, the next one would have. People need to understand that there are hundreds of foreign-trained agitators and organisers operating in this country, and also tens of thousands more disciplined Communists.”

China’s state television is repeatedly showing images of America in chaos in heavy rotation, exploiting the crisis to justify the Chinese government’s assault on Hong Kong; and a Chinese Communist Party spokesman even went to the extent of blaming the brave protesters in Hong Kong of inflaming the riots in the United States.

For the first time in 31 years since the Tiananmen Square massacre in 1989, the people of Hong Kong were denied permission to commemorate the martyrs of June 4, but tens of thousands gathered anyway for a vigil at Victoria Park, defying orders from Beijing’s overlord Xi Jingping.

This was barely noted in the American media, which takes significant ad money from the Chinese Communist Party and parrots the CCP’s propaganda, with no shame. In the United States, we can openly discuss our crimes, we can report on our tribulations, killer cops can be charged with murder, we can vote, we can protest, freedoms that should never be taken for granted. In China, there are no elections, no free press, and to criticise the Communist Party is a crime punishable by death. China has for years declared that it intends to replace the United States as a global hegemon, with its policy of “unrestricted warfare”. If China’s role in inciting the violence in America’s cities continues, the elites who have aided and abetted Communist China’s rise will soon be compelled to answer this question: “Which side are you really on?”