Farrukh Dhondy | Hedgie, Javid were boulders that broke the camel’s back… 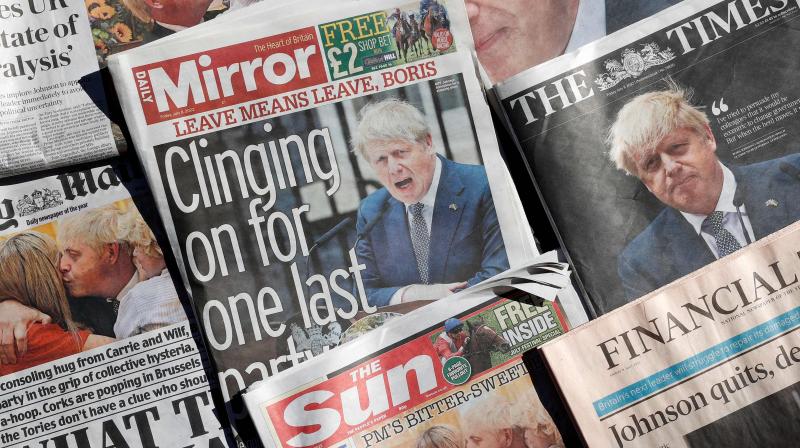 Front pages of British national newspapers, each leading with a front page story of the resignation of Boris Johnson as leader of Britain's Conservative Party, are arranged for a photograph in Downing Street, the official residence of Britain's Prime Minister, in central London on July 8, 2022. (AP)

“Why is virtue always compared

To the straight and narrow path?

Why do they call it “sleeping with”

When sleep is only the aftermath?”

From Show Me the Way to Go Om, by Bachchoo

The time is out of joint, O cursed spite, that a couple of South Asians contrived to put it right? Did two Indians pursue and vanquish the mendacious, tenacious cowboy? Or even as Sir Keir Starmer, the leader of the Labour Party, said: “The sinking ship is finally abandoning the rat.” He was referring unkindly but justifiably to Prime Minister Boris Johnson and -- with perhaps a twinkle of wishfulness -- to the Tory Cabinet, government and party as the sinking ship.

Yes, BoJo is finally GoJo. Two senior ministers, Chancellor “Hedgie” Sunak and health secretary Sajid “Covid” Javid, were the boulders that dislodged themselves and caused the avalanche that finally buried him. They said in resigning that he was lying and had demonstrated bad judgment, bringing the party into disrepute.

Their resignations were the straws that broke the camel’s back (and he got the hump?)!

Within 36 hours these two were followed by 48 other senior and junior ministers and parliamentary private secretaries (PPSs) who are not Cabinet members but are part of the government.

The story gets queerer and queerer. Hedgie was quickly replaced by the education minister, Nadhim Zahawi, who threatened to join the splitters if he was not given the chancellor’s job. BoJo gave in, only to find that Zahawi, 48 hours later, was urging him to resign. Gratitude or rat-itude?

Then another minister, Michael Gove, publicly called on BoJo to go. He was immediately sacked and Downing Streets labelled him as a “snake”. Gove has form. In a previous leadership contest, he had backed BoJo and then turned, Brutus-like, and announced that Boris was not a fit character to be leader of the party, far less a Prime Minister, and that he was standing himself. Despite that treachery, as the years passed, the snake was crowned a minister for “levelling up” – that is, to get the poorer parts of the UK level with the rich. The wags say that BoJo’s team are indeed achieving this -- by making the rich poorer.

Even queerer: Michelle Donelan was appointed education minister to replace Zahawi. She accepted, but after 36 hours resigned, perhaps contriving to go down in the Guinness Book of Records, if not in history!

BoJo’s premiership has been riddled with scandal and what one can only call slack leadership. His one great claim to fame, the one he underlined in his resignation speech as he stood before the gathered media at a lectern outside 10 Downing Street, is that he “got Brexit done”, that may have won him a large majority in Parliament but it saddled him and his government with significant, even secessionist, revolts in both Northern Ireland and Scotland and inflicted untold hardships on the population of the UK through lack of essential workers in services and a directly Brexit-related hike in prices on commodities, especially 30 per cent of all the food consumed in the UK that are now subject to import taxes.

The disasters of Brexit can be matched by the crises in the ministerial departments run by the two initial splitters. Hedgie’s chancellorship leaves the country with a cost-of-living crisis and 10 per cent inflation -- the highest in Europe. Sajid Covid, an avid Brexiteer, leaves the National Health Service with a shortage of 50,000 nurses and, according to the British Medical Association, a lack of the same number of doctors by this winter.

BoJo announced his resignation very grudgingly. He blamed the avalanche of resignations on a “herd” instinct. His own instinct, through the three years he has been in 10 Downing Street, is tenacity. He was first criticised for him and his wife taking money from a Tory donor to redecorate their living quarters above 11 Downing Street at an absurd price.

Then came the Owen Paterson affair. This ex-minister and MP received half a million pounds for lobbying on behalf of private clients. He was found guilty of corruption. BoJo sought to change the rules to excuse him but had to retreat in the face of an outcry.

Then there was “Partygate”: BoJo breaking the rules that he had set for gatherings during Covid-19. He very blatantly lied to Parliament about it and is still under investigation for a breach of the ministerial code.

Precipitating the resignation avalanche, Tory deputy whip Chris Pincher resigned last week admitting that he had been drunk the previous night and had groped two young men at a private gathering. It wasn’t Mr Pincher’s first offence. He had been accused of sexual misconduct on several occasions over the years. BoJo claimed he hadn’t known about these accusations when he appointed him to the Cabinet. Now, according to officials who worked for him when he was foreign secretary, he lied. He was well aware of Pincher’s reputation and even joked that he was Pincher by name and pincher by deed.

BoJo now says he will stay on as PM till a new leader is elected. He has appointed loyal apparatchiks to the top vacant Cabinet posts. Filling the other 45 may be impossible and he is being urged to go immediately so as to “Get Bojexit Done!”

And about these new temporary ministers? Why would, to coin an idiom, rats jump onto a sinking ship?