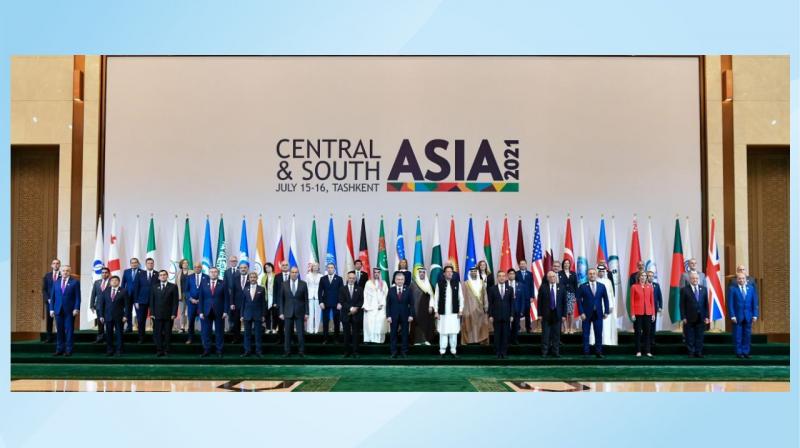 With the shrinking footprint of the United States in the region and the relentless advance of the Taliban, the real Quad in connectivity which looms on the horizon is between a Taliban-dominated Afghanistan, an expansionist China, a hostile Pakistan and Uzbekistan --the only country that is friendly to India in this group. Image from the conference 'Central and South Asia: Regional Connectivity. Challenges and Opportunities'. (Twitter)

In his inaugural address, the Uzbek President recalled the ancient era and medieval age links between Central and South Asia from the Harappan civilisation to the Baburid states. Babur originally came from Fergana Valley present-day Uzbekistan. He noted the current stark reality that “there are no effective trans-boundary routes and the trade-economic ties are poorly developed”.

President Mirziyoyev proposed the development of modern, effective and secure transport and logistics infrastructure in Central and South Asia. In his view, “a key element” of this connectivity architecture would be the Termez-Mazar-e-Sharif-Kabul-Peshawar Railroad. He noted that this project “has already gained broad support, including from the leading international financial institutions”. Extolling the virtues of this rail corridor, the Uzbek President said that it would make it possible “to fully realise the transit potential of the two regions, form the shortest route and significantly relocate the time and cost of transporting goods between South Asia and Europe through Central Asia”. He further noted that this Trans-Afghan railway corridor would connect with China and it fully corresponds with the Belt and Road Initiative (BRI). Pakistan Prime Minister Imran Khan spoke at length, offering Karachi and Gwadar as convenient ports for the Central Asian republics. He referred to the China-Pakistan Economic Corridor (CPEC) as the “flagship project of BRI” and invited the Central Asian nations to join the CPEC, stressing that it was “not exclusive”.

Chinese foreign minister Wang Yi conveyed Beijing’s readiness to “join hands with the Central and South Asian countries to forge a closer regional connectivity partnership through high-quality cooperation under the BRI”. Foreign minister Wang Yi made a four-point proposal on promoting connectivity in Central and South Asia, which emphasised that “the region should stick to openness and inclusiveness”. He said that China opposed “playing geopolitical games in the name of connectivity” and was “willing to follow the principles of extensive consultation, joint contribution and shared benefits”. He also called on the World Bank, the Asian Infrastructure Investment Bank and the ADB to invest in these connectivity projects.

For the record, Mr Yi added that China will deepen law enforcement and security cooperation with all parties in the region and jointly combat the “three evil forces of terrorism, extremism and separatism”. This claim flies in the face of the consistent Chinese protection given to Pakistan as a safe haven for UN-proclaimed international terrorists like Masood Azhar and Dawood Ibrahim as well as terrorist organisations like the Lashkar-e-Tayyaba and Jaish-e-Mohammad.

For Uzbekistan, the BRI project could help open the transport corridor towards the Persian Gulf, enabling expansion of commercial and trade routes for the country. Uzbekistan has already expressed its desire to participate in BRI projects through bilateral and regional platforms. China is also energetically promoting the “Silk Road Economic Belt” and Uzbek President Shavkat Mirziyoyev was an honoured guest at the First Belt and Road Forum held in Beijing in 2017. At this forum, the two countries signed 115 deals worth more than $25 billion, which covered electrical power, oil production, chemicals, textiles, transportation, Infrastructure, etc and by road and rail to the Caspian Sea.

Uzbekistan has also joined the India-sponsored “International North-South Transportation Corridor”, or INSTC, a multi-model route that will connect Mumbai port with Chabahar in Iran and further to the Caspian Sea. Uzbekistan will benefit by an INSTC spur, the Trans-Caspian Railway, heading east from Iran into Turkmenistan, which connects with the Uzbek rail network through Urgench in Uzbekistan.

In Tashkent, there was some excitement about the proposed “Trans-Afghan Railway” linking Uzbekistan via Mazar-e-Sharif in Afghanistan to Peshawar in Pakistan. This $5 billion project is linked with the “Quadrilateral Traffic in Transit Agreement”, between China, Pakistan, Kyrgyzstan and Kazakhstan, that also links to the CPEC. Uzbekistan expressed its desire to join this pact last year.

Eyebrows were raised when at the Tashkent Conference the United States, Afghanistan, Pakistan and Uzbekistan announced the creation of a new “Quadrilateral Diplomatic Platform” that focused on enhancing regional connectivity. The US media note said that the “parties intend to cooperate to expand trade, build transit links, and strengthen business to business ties”.

However, with the shrinking footprint of the United States in the region and the relentless advance of the Taliban, the real Quad in connectivity which looms on the horizon is between a Taliban-dominated Afghanistan, an expansionist China, a hostile Pakistan and Uzbekistan --the only country that is friendly to India in this group.

China has already signalled that it is willing to work with both sides in Afghanistan. On July 28, foreign minister Wang Yi met with a Taliban delegation led by the head of the Afghan Taliban Political Commission, Mullah Abdul Ghani Baradar, in Tianjin. Pakistan will continue to block India’s access to Afghanistan and Central Asia and this country’s only option might be to focus on developing Chabahar Port and the INSTC. The United States needs to be persuaded to give a waiver to Indian and other multinational companies operating at Chabahar port.

Afghanistan is poised at the knife’s edge and the region would see new geo-strategic equations. India needs to play its cards adroitly in order to remain relevant and effective.