V Sudarshan | Wuhan and the garden of false expectations

Is it even possible that Modiji, chowkidar examplar, was blindsided by Xi and let himself be led up the garden path? 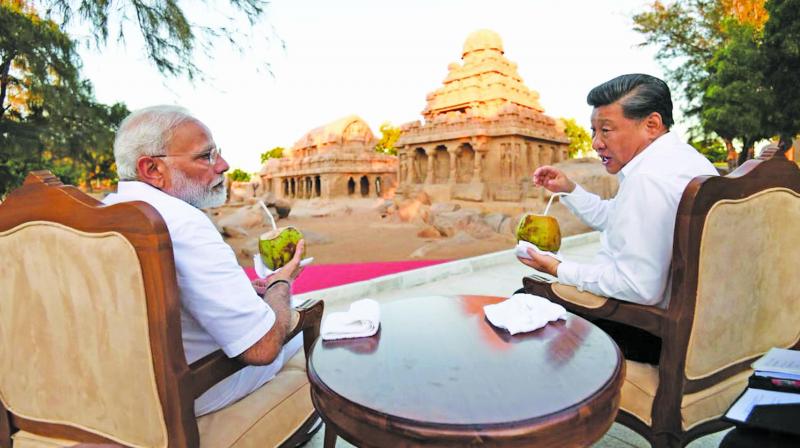 Picture this mood setter: It's a cool April evening on the banks of the East Lake in Wuhan. The year is 2018, some months after a testing standoff in Doklam, Bhutan, between Indian and Chinese troops. Narendra Modi and Xi Jinping are listening to the dulcet notes of ancient Chinese string instruments and flutes playing a sweet Bollywood hit of yesteryear.

By the time the music sets the mood, the two leaders have taken a stroll by the East Lake without their official delegations in tow, have sat in a houseboat, without their delegations, partaken of Chinese tea, teased only by the gentle lakeside breezes. The song the Chinese musicians are playing with elegance, plucking pear-shaped lutes, zithers, blowing melodiously on Chinese flutes, is a carefully chosen Kishore Kumar-Asha Bhonsle duet which goes

It is a song where two lovers pledge never to separate.

This song helped define the so-called “Wuhan Spirit”. Later the following year, in Mamallapuram (or Mahabs, as it is locally known) near Chennai, in another informal summit setting, which is to say, without the rigidity of official positions, Xi was to tell the media, looking as pleased as a fat Chinese cat that had just tasted its favourite cream, that he had “heart to heart discussions” with Modiji on bilateral matters. This heart to heart moment was branded by spinmeisters as the “Chennai Connect”. What the formal communications were to claim later, after both these mutually rewarding meetings, where each leader much better understood the other’s strategic perspectives on a range of issues, reveal as much as they conceal. But Modiji was to declare with much satisfaction: “The first informal summit between India and China last year in Wuhan led to fresh stability in our relations and gave a fresh momentum. Strategic communication between our two countries has also increased. The Wuhan summit instilled a new momentum and trust in our relations and today’s ‘Chennai Connect’ is the start of a new era in India-China relations.”

Significantly, Xi Jinping said that such informal summits have helped “initiate discussions on many issues” and he was happy that Modi had mooted the idea. So we know whose idea it was, these one-on-ones to better understand the other. That the Chinese responded, and that after 18 meetings between Modiji and Xi Jinping, the comfort of “strategic communication” has entered the lexicon of diplomacy. It is also appropriate to underline the phrase “fresh stability” that Modiji highlighted.

Now, consider the surprising  remark that external affairs minister S Jaishankar made in an interview to the Hindustan Times a few days ago: “We have a very large number of Chinese forces (in Galwan and other areas) and frankly, we (emphasis added) are at a loss to know why.”

It is at some variance with the statement by Chief of Defence Staff Gen. Bipin Rawat to the same newspaper a week prior to that. In it he said two things broadly, one suggesting that there is proper intelligence coordination between the various agencies, thereby downplaying the possibility of intelligence failure, and second, that the military option was always there if all else fails, a foreshadowing of intent.

Indeed, there could be evidence that by October the aviation wing of the Research and Analysis Wing had produced compelling visual and other evidence which when pieced tougher showed that the Chinese were consistently massing, moving, constructing, like worker ants. This couldn’t have been filed away in some cupboard without the necessary dissemination. The answer lies elsewhere.

Is it even possible that in the 18 times Modiji met Xi in the past six years, one-to-one, they failed to probe each other’s perspectives on the boundary issue? After all, there are over 460 incursions a year. The Wuhan summit followed the numbing Doklam experience. And now Galwan, Hot Springs and Pangong Tso follow Mahabs. How does this make any sense? Especially after Xi’s political endearment, declared so openly: “Yesterday, Prime Minister, as you said, you and I had engaged in candid conversations like friends, heart to heart discussions on bilateral relations.”

The fact is the strategic framework of how to take the relationship forward, in place since Rajiv Gandhi’s 1988 visit to Beijing, which downplayed the urgent resolution of the boundary question and made it a secondary goal while seeking to expand the horizon of relations, had long collapsed by the time Modiji started meeting the Chinese leadership in 2014. Was Modiji still waiting for a strategic communication when he declared on June 19: “Neither have they intruded into our border, nor has any post been taken over by them (China)”? After all our prime minister had a chance to broadly survey and review what the two countries had been able to achieve and, more important, had a chance to map the path where the two were heading in an uncertain world. It was quite an unparalleled achievement, expending so much political capital to better get a handle on this complicated relationship. Modiji must surely have factored in the negative signals the Chinese have sent over the years, on the Nuclear Suppliers Group, on Jaish-e-Mohammed, on Pakistan, Arunachal Pradesh. Or were they, like the two characters in Chiroco’s painting, just conversations among the ruins, with the high Himalayas providing the barren backdrop? Could it be that for a while Modiji and his policymakers, based on Modiji’s various heart-to-heart conversations with Xi, had thought there could be somehow a disconnect between Xi and sections of the PLA and that he would somehow prevail? Was this the context that we should have viewed our man in Beijing’s special pleadings in the middle of August with the director of the Office of International Military Co-operation of the Central Military Commission of China? Is it even possible that Modiji, chowkidar examplar, was blindsided by Xi and let himself be led up the garden path? If we allow for that possibility, then the recent surprise expressed by our external affairs minister, in the collective second person “we”, starts to make sense. He speaks not only for himself, but for those who provided close support in Wuhan, Mahabs and 16 other salubrious settings.  Thus have the scales fallen from their eyes. That would explain the additional, proactive military scrambling, the forward deploying, in the areas of the Ladakh UT where we continue to plug the gaps. A delightful reworking of Jawaharlal Nehru’s much-maligned forward policy.