In India, men are the more fashionable sex

Interestingly, fashion happens to be a field in Bollywood as well as other arenas. 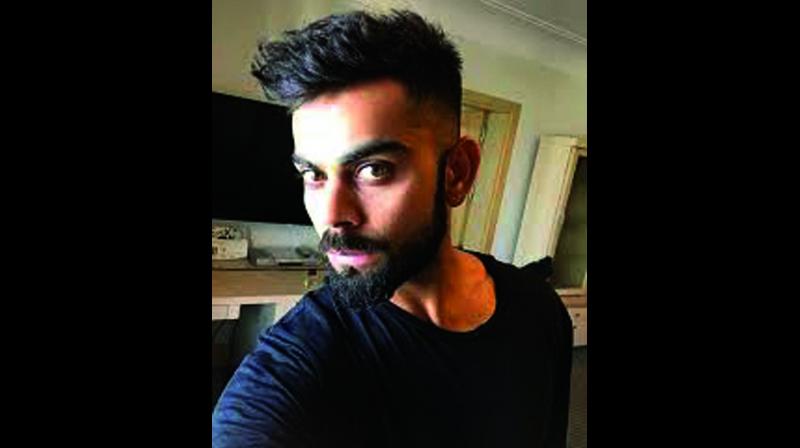 The Kohli cut has men of all ages and classes swooning over it. No, this term is not a neologism. Nor does it refer to any stylish cut from the bat of the swashbuckler. It refers to Virat Kohli’s hairstyle.

Who takes the lead where talk of fashion idols is concerned? Ah, instantly, one tends to turn to Bollywood, and female actors. Of course, there is no denying that the film industry is flooded with people being extremely conscious about their looks, their respective fashion styles — from hairstyles to dress and footwear. Name it and the particular fashion term is instantly linked to a screen personality — their dialogue delivery, their smile. After all, fashion is their profession, their life — their image depends on it. Isn’t it so?

Interestingly, fashion happens to be a field in Bollywood as well as other arenas. In these arenas, it would be wrong to assume that the lead is taken by the fairer sex. Surprising, is it not?

Let us for a moment, turn to cricket. Yes, of late, some importance has begun to be given to the beautiful faces in the Indian women’s cricket team. But that’s about all. Of course, it cannot be missed that the popularity of women’s cricket is nowhere near the craze inhabiting the men’s format. And here, the Kohli cut has men of all ages and classes swooning over it. No, this term is not a neologism. Nor does it refer to any stylish cut from the bat of the swashbuckler. It refers to Virat Kohli’s hairstyle. In terms of popularity, the Kohli cut leaves even Bollywood far behind. Of course, there was a time when a lot of importance was given by men to Amitabh Bachchan’s hairstyle and women to the Sadhna cut. But that is history overtaken by the Kohli cut.

Whether it is cricket, films, politics, television or any other field of human endeavour, the irony of men being ahead in more ways than one cannot be ignored. Perhaps, tennis is one of the few where Sania Mirza holds herself ahead of her male colleagues, fashion-wise.

Give another thought to the film industry. There is nothing new about men being as fashion conscious as women. This has always been rule of the game. Down the decades, more than a half-century ago, hairstyles of male celebrities, from Dilip Kumar to Raj Kapoor and Manoj Kumar, had their own distinctive look. Interestingly, the same cannot be said about the ladies. Ladies’ hairstyles varied from being plaited, tied in a bun, left loose to a ponytail. A ‘hero’s hairstyle varied rarely. Perhaps if they had to display a bald pate, it did.

If you have noticed, there has been a certain change in the standards of male actors in other fashion. The last century was marked by their being extremely particular about showing off their hairy chests. It was probably the in-thing then. Now, hairy chests no longer abound. Perhaps, the trend of men dancing without their shirts on has led to them going for the hairless look.

Be it perfume, creams, hair dyes or even clothing, male actors are as much in demand for ads as female. If you notice carefully, male actors aren’t exactly behind women in using lipsticks, either. Here though, they tend to opt for the nude shade, perhaps to conceal their lip’s dark coloration. And, where image-consciousness of celebrities in various fields is concerned, they may not appear to be fashion-savvy, but definitely are.

The new generation is turning grey and has begun to use hair colour, for fashion and also so as not to look older than their years. Notice the colour of politicians’ hair? Especially the ones who crossed the half-century mark years ago? Hmmm, interesting isn’t it? Of course, they have the right to colour their hair, moustache and/or beard should they desire.

Interestingly, this is another field where men overtake women – projecting the “political” image. Women’s dress is confined to either saree or salwar-kameez. Among men, several styles of dhoti are visible, each linked to the region he hails from. The style of traditional jackets and sherwanis also varies. A few are seen in safari suits, some in a dress shirt and trousers, many in kurta-pyjamas and so forth.

In contrast to the set colour and style of his predecessor Dr. Manmohan Singh’s outfit, Prime Minister Narendra Modi’s style is far more diverse. This holds for his jackets as well as footwear. Interestingly, the variety in dressing styles of Indian male politicians leaves their western counterparts far behind – they are mostly confined to being “suited-booted”.

What we observe from the craze about the Kohli cut, Bollywood’s fashion standards and the heroes of the political arena, is that it is the last variety of individuals who take the lead, numerically as well as cosmetically. Thanks to the communication boom, they are continuously in the public eye. Except for Bollywood, the fairer sex falls far behind men in this domain, and at least for sure in cricket and politics. This includes most ladies being paid less and/or facing negative discrimination. Perhaps, it is high time the stereotype about linking fashion to women changed. Indeed, it needs to change right away!

Nilofar Suhrawardy is a senior journalist and writer with specialisation in communication studies and nuclear diplomacy. Modi’s Victory, A Lesson for the Congress...? (2019) is her latest book.