Opinion   Columnists  08 Dec 2020  Aakar Patel | Will Centre be forced to give in to the farmers?
Opinion, Columnists

Aakar Patel | Will Centre be forced to give in to the farmers? 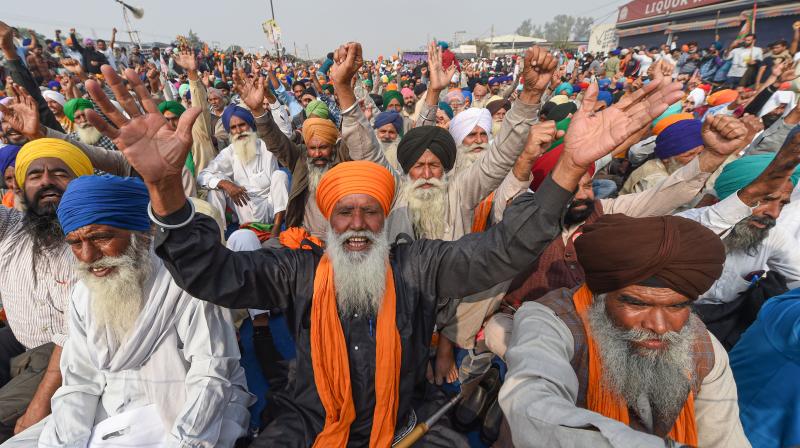 Once again, the Narendra Modi government has shown that it will ignore the concerns of large numbers of Indians till it becomes a national crisis. Exactly a year ago, after a series of threats from the Union home minister to India’s minorities, the government passed legislation that Amit Shah said would be the first step of his chronology on citizenship. We know what happened immediately after that -- protests by those whom the laws were victimising, no support for them from India’s internal democratic structure, international condemnation of India’s actions, and then violence instigated and encouraged by the ruling party.
Earlier this year, the government passed, by ordinance during the Covid-19 pandemic, a set of laws that would change the way that agriculture would be done, especially in the northwest. Nobody had asked for these laws, no farmers’ groups were consulted and there was no explanation on why these had been brought into force through the ordinance route. Ofcourse, this government follows the adage of “never apologise, never explain”. It has never apologised, and it has never explained.

For most of the media, which is urban and middle class, the farmers’ laws made no sense. Google will throw up dozens of reports, often from the same publication, with the headline “farmers bills explained”. Few of us have seen a mandi, know what APMC stands for or does and what the issue of MSP means to the average Punjabi. For this reason, the issue was off the headlines very soon.

Predictably, the farmers began a protest that soon developed into a mass movement but appeared small because it was ignored by the national media and was localised in a couple of states. The government in New Delhi also ignored it and in fact escalated its confrontation by disallowing the IndianRailways from operating trains to Punjab even after the protesters had said they would not disrupt traffic. No railway property was damaged in the peaceful protest, but for two months no train went through even after the protesters had left the railway tracks.

It was clear that the government was not going to back off its legislation unless it was forced to. At this point, the farmers began their march to besiege the national capital. The BJP made a few attempts to hold them back in Haryana, a state that it controls, but was unable to because of the resolve of the farmers. We are now seeing the consequences of arrogance and hard-headedness. The government has no option but to negotiate with the farmers. It is about to rewrite the laws that it should have written up after consulting them in the first place. Prime Minister Narendra Modi will say that he means well and wants to double the farmers’ incomes, but he will not concede that he needs to consult them before coming up with his genius idea that will help them do this.

Notice the similarities between the farmers’ movement and the protests across the country against the citizenship amendment laws. First, that these laws were passed without anyone having asked for them. Second, that the minorities they affected went on to protest immediately because they sensed the danger to them that the rest of the population did not, and third, that the rest of us did not care about the laws and had little or no empathy for those who were affected. It was the Muslims in the lead in the protests against being sent to concentration camps, and it was the Sikhs in the lead on the issue of the controversial farm laws.

Fourth, that the government recklessly and deliberately demonised the protesters, calling them terrorists, separatists and “Khalistanis”.

Fifth, that the rest of the world was alarmed by what the government was doing and intervened. India does not like to be lectured by other nations but if you do something dumb then you have to face the consequences. The European Union’s members of Parliament wrote up a very strong motion against India’s citizenship laws, and India was able to only delay the tabling of the motion with difficulty. Canada, which has a large and influential Sikh population, told India that it was “concerned”. India objected to this interference but could do little because we have no real leverage. If thousands of Canadians were migrating to India monthly instead of the other way around, we might have had some say.

The sixth thing that will likely be common to both these issues is that they will end in the same way. Mr Modi made Amit Shah eat his brave words on his chronology and said that the issue of the National Register of Citizens had not been discussed. That lay the matter to rest. On the issue of the three farm laws, something similar will come. The government has used all the tricks it has on the farmers. But they are still standing there blockading Delhi, prepared to be there for months. Their demands will have to be met, of course, and this government will move on to the next great idea, without an apology or an explanation.