With every fresh discovery of a new variant, a frisson of fear is now felt across the world 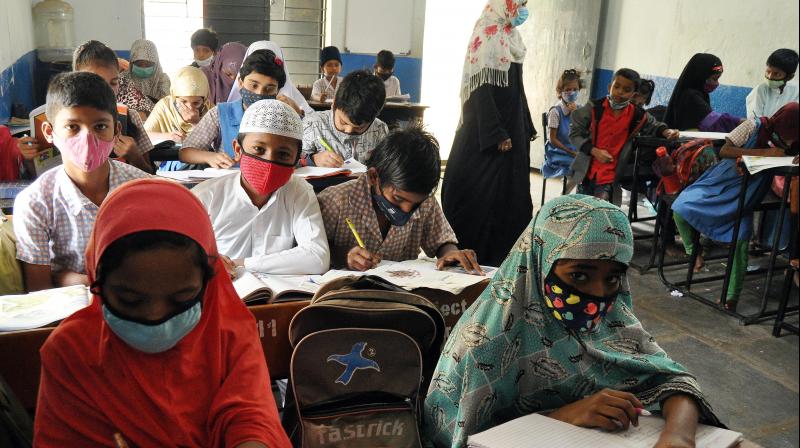 Thousands of schoolchildren in India have regressed disturbingly in the past one and a half years. (Representational Image. DC Image)

It was quite an eye-opener for me when I realised that many students had mixed feelings about going back to “physical school”. I looked up a number of articles on the anxiety of returning to normalcy and I discovered that it was fairly common. This was surprising to me because when we were in the middle of the Covid-19 pandemic, everyone I knew had been yearning to return to their old, familiar world, especially because nobody could predict the future for all humans. Nobody knew when we would be able to interact with others in person and see our friends in the flesh once again.

In this article, I will not touch upon the reluctance of many people to return to the workplace over the fear of contracting the dreaded virus. With every fresh discovery of a new variant, a frisson of fear is now felt across the world. This is only to be expected. Every single family has been affected by the pandemic in multiple ways — in the form of death, sickness, loss of income, loneliness, isolation, crowded homes and, in general, by the unnatural disruption of our “normal” lives. We have all lived in a strange and unfamiliar world for almost two whole years and now that we are about to return to some kind of “normalcy”, we do not witness undiluted joy about the prospect of coming out of our cocoon, stepping off the virtual platform and engaging with the real world.

With new parents, the anxiety is about their toddlers facing an alien world altogether. Two-and-a-half-year-olds who are now preparing to go to play schools and nurseries have not ever interacted with children or adults other than members of their immediate family. They are terrified about strange faces and are quite averse to meeting other children of their own age. Many had been registered in play groups where online lessons were being conducted for toddlers. In fact, some of them feel quite comfortable interacting with images on the screen. Amusingly, some have even picked up all kinds of accents depending on the videos and educational packages they have been exposed to. But stepping out into the real world today seems more of a challenge than the first day of play school was in pre-pandemic times.

Primary and middle school children, on the other hand, seem to be more ready to go back to school although they have mastered the technology required to attend their virtual lessons proactively. What they miss the most seem to be running around in their school grounds and playing outdoor games. Music lessons have also taken a beating -- students have been playing instruments individually or singing solo. Choral music is now the end-product of the technology of “layering” and for the moment the joy of singing together in harmony had to be sacrificed. However, the pursuit of art and craft as well as culinary activities carried on virtually uninterrupted.

The story is somewhat complicated where seniors are concerned. Most of them had to transition to an electronic world in order to keep up with their demanding academic programmes in school and outside. Teachers were so wrong when they declared that the bane of private tuition would be substantially reduced when we went into the “online” mode. Private tuition has been flourishing as never before, simply because the private tutors showed tremendous resourcefulness in offering lessons on the virtual platforms and have even expanded their clientele. Indeed, many senior students have confessed that working from home was rather comfortable. Yes, they missed their friends in school, but who wants to get up on a winter morning and travel all the way to school and spend the whole day in the classroom without any “asynchronous” breaks?

Other anxieties are more difficult to analyse. Some students have not even met their classmates off-screen and they wonder how it will feel to meet them in real life. The shy ones who, according to many teachers, had come out of their shells in their virtual classroom will perhaps regress in the physical classroom. Fear of crowds and fear of proximity remain embedded in the psyche, although in most parts of India we saw that when various festivals were on, people forgot the Covid-19 pandemic altogether and enjoyed life with gay abandon. But everybody admits that life is not even limping back to normal; it is moving to some strange plane that we do not understand yet. The “new normal” has been talked about ad nauseum but nobody really knows whither we are all moving -- at least in the educational world.

Thousands of schoolchildren in India have regressed disturbingly in the past one and a half years. Reports indicate that many have returned to the labour force and private schools have not been much in demand among the poor. Mobile telephony had become the lifeline for many, in both rural and urban areas, but connectivity had remained an issue for all concerned. While some children’s educational progress has suffered because of the lack of laptops, Internet-enabled smartphones or other devices, others lament that they have become too used to typing on screens and that their writing skills have sharply deteriorated.

All in all, it appears that it will not be easy to become “normal” again.