Not just Stan Swamy, but every single prisoner in India should be able to take human rights for granted as citizens of a democracy 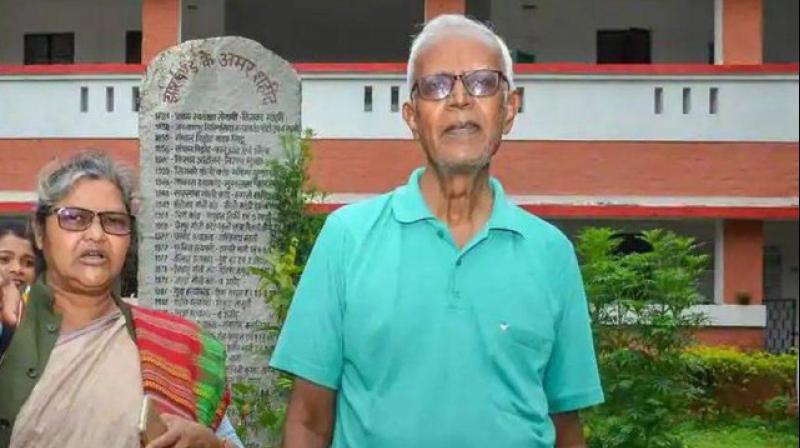 Stan Swamy was the oldest person accused of terrorism in India. (Image: PTI)

Stan Swamy was a universal “father” much beyond his religious calling as a highly respected Jesuit priest. He was also everybody’s “grandpa”, a beloved brother and uncle, who died an ignominious death last week. A death that could have been prevented had the authorities showed basic decency, kindness and some humanity towards a seriously ill, extremely frail 84-year-old charged with a crime never conclusively established by the State. Stan Swamy was the oldest person accused of terrorism in India! Whether or not he was “guilty”, he was fully entitled to care and medical help at Taloja Jail and then in hospital, where he passed away of Covid-related complications before his bail plea could be heard.

Not just Stan Swamy, but every single prisoner in India should be able to take human rights for granted as citizens of a democracy. Of course, that doesn’t happen, has never happened. Most prisoners in are summarily stripped off all rights the moment they are put inside. Thousands rot in filthy, unhygienic jails for years, with no access to a fair trial… no justice, for God’s sake! There are horror stories galore about the rampant abuse in Indian jails — abuse that goes undocumented and unpunished. Stan Swamy was one more victim of the system.

So far, there has not been even a murmur of an apology or any expression of regret at what took place with the man who was allegedly denied even a sipper to quench his thirst (he was a Parkinson’s patient and couldn’t hold a glass because his hand trembled). Instead, Swamy’s sympathisers are being labelled as anti-nationals and trolled for supporting a “traitor”. This is such a moronic and predictable pattern it doesn’t warrant a comment.  Anybody who supports a Christian or Muslim activist is suspect. Why? Because Christian and Muslims have just one agenda  — conversion. And Hindus? Never! Hindus convince, not convert.

In the case of the Roman Catholic Stan Swamy, the State wanted to send out a strong signal — and  the State succeeded. Extending public support to marked people like Stan Swamy is asking for trouble. Who wants that? End of the story. Protesters can conduct countless candlelight vigils and start online campaigns; the State really doesn’t care a fig. Stan Swamy has been made an “example”: this is what a despotic State can do to anybody seen as a disruptor. The reasoning is cold-blooded and cruel: how long can Father Stan’s death be kept alive as an issue worth fighting for. Who will pursue it? At some stage, it will peter out — as these things invariably do. At the moment, the topic is “hot” — and there’s competition of a perverse kind in the media. Television channels have promptly switched content.

What’s more eyeballs-worthy: the death of a revered activist, or the death of a legendary actor? Whose ambulance is worth chasing — the late Dilip Kumar’s or Stan Swamy’s? Where are the “celebs” expressing sad thoughts for Stan Swamy? Wait a minute: how many celebs have even heard of Stan Swamy or the monumental tragedy over his death?

No, of course, it isn’t fair to compare the passing at 98 of India’s greatest actor who won the hearts of millions with the demise of an 84-year-old who spent decades in Jharkhand working with and for one of India’s most marginalised communities, our tribals. But it’s also a strong comment on media priorities that shape India’s public narratives. Non-stop and highly insensitive coverage with cameras shoved inside an ambulance, as a superstar’s widow accompanied her life partner’s body on its last journey, is SICCCCCK! It’s not “news”, folks!

Capturing the arrival of Bollywood stars at the kabarasthan is also not news. The near total blacking out of the tragedy of Stan Swamy’s heartbreaking death: well, the blacking out itself constitutes “news”. The obvious and sad truth is that most media outlets meekly surrendered to the administration’s unstated but perfectly clear mandate (“no criticism allowed”) and are happy to play ball. Boss, we have no choice left, they moan. It’s that or facing heaven knows what in terms of retribution. This is India’s reality. Freedom of expression is a “nice concept”, but barely exists. Across the board and at every level, media and entertainment are being brought to heel, via various clever and cunning modes of absolute control. Newbies in the media business have happily gone along — they don’t know any better! Their professional lives as journos are being shaped by the current repressive environment, where all and any “opinion” that goes against unwritten but clearly understood diktats is instantly and harshly dealt with. The predominant feeling in the media is: Who wants to mess with these guys. We aren’t here to change the world. It’s just another job, yaar. No, it isn’t!
The Cabinet shuffle seems well-timed and strategic. Hiring and firing is never easy: especially the firing. But if it’s gotta be done, it’s gotta be done! Our newly minted health minister — ummmm, okay! All eyes on the man: Gujarat MP Mansukh Mandaviya, a “padyatra” specialist, now expected to be on top of the third Covid-19 wave, not botch it all up, like his predecessor, Harsh Vardhan, of “end-game” infamy, did with the second. For starters, let’s hope and pray the third wave will skip India, or at least won’t be as lethal. Mr Mandaviya has been given the toughest portfolio. He will jolly well have to man up and deliver, as he did earlier with a few good initiatives in Gujarat, like the menstrual health hygiene programme, which was recognised by Unicef.

For us, in Maharashtra, we are still open-mouthed about Narayan Rane’s unexpected elevation. Come on! Rane??? I am no fan of the Shiv Sena, so Mr Rane’s sudden jump up the political ladder seems a case of showing the Sena its place. Of course, Devendra Fadnavis is a master of that game and is responsible for Mr Rane’s new job. For a man who was chief minister not all that long ago (Rane, not Fadnavis), Sanjay Raut’s taunt that Mr Rane was given a “micro” portfolio by Prime Minister Narendra Modi is not without basis.

The saga of Stan Swamy is already stale news. He is off the front page. And the nationwide outrage is rapidly shrinking. Given the ADS citizens suffer from, the only people mourning the octogenarian’s death are the families of tribals he dedicated his life to. And of course Jesuits, who will honour his memory in their own unique way: by stepping up their service to humanity. What better recognition can there be for the wonderful man’s whose immeasurable contribution to recognising the value of human dignity and extending help to the most marginalised of our land is best summed up when he shared these poignant lines: “A caged bird can still sing…” RIP!