Farrukh Dhondy | Queens and Kings: Why the Brits love the royals 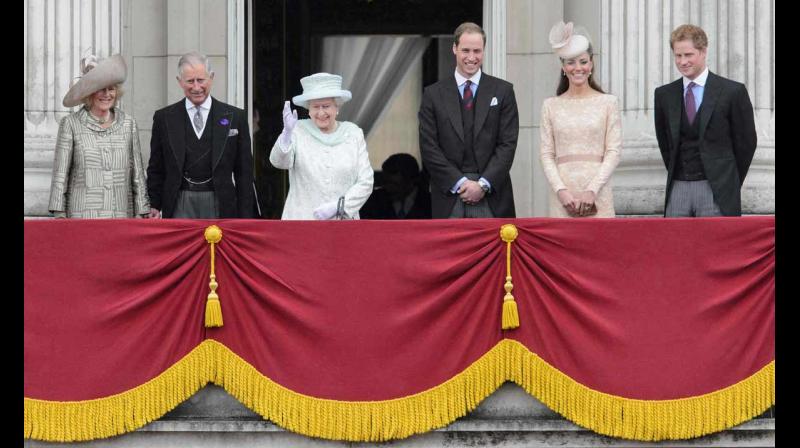 In this file photo taken on June 5, 2012 Britain's Queen Elizabeth II (C) waves from the balcony of Buckingham Palace next to (L-R) Camilla, Duchess of Cornwall, Prince Charles, Prince of Wales, Prince William, Catherine, Duchess of Cambridge and Prince Harry at the end of a coach procession on the final ceremonial day of the Queens Diamond Jubilee in London. (Photo: AFP)

The faithful to comply

No call then for me

Decreed to be free

— From House for Mister Dishwash, by Bachchoo

Queen Elizabeth II is dead. God save King Charles III. With the death of the gracious Queen at the age of 96, a piece of irritating, amusing and constant reactivity will have to die: the politically necessary satirical British magazine Private Eye regularly ran a spoof feature about Prince Charles waiting for his mother’s demise. In each issue which featured this dilemma, Charles would be addressed in his bath or other environment playing with his toys or talking to his plants by his gay Comptroller of the Royal Toothbrush or other such factotum. This person would say something ambiguous, which Charles would interpret as his mother’s death. He would spring out of the bath and rush, naked, to wherever in order to finally assume the throne, only to discover that he misinterpreted the message his factotum had conveyed.

I read this piece of satire each fortnight with a broad smile, as I am sure did thousands of Private Eye’s regular readers. Alas, the context of the joke has ended. Charles has, without rushing out of a bath naked, attending to his mother’s deathbed in Balmoral, Scotland, acceded to the throne and issued a moving tribute to the life, duty and his genuine love and respect for his mother.

Elizabeth II, the longest reigning monarch in British history, is dead. The nation will go into official mourning for weeks, even with the cricket-analogous contention that she “had a good innings”. At the age of 96 one could extend the analogy to say she seemed to have had a follow-on.

Contemporary British monarchs are not expected to do anything much. They support charities, they are chairs of charitable institutions, they open Parliaments and shake the hands of designated Prime Ministers, appointed by their political parties to give them the royal assent. They accept the resignations of Prime Ministers who have been dismissed by their own political parties. They preside as titular heads over Commonwealth conferences. They breed corgis and race horses and lend their names to a myriad of good humanitarian causes.

But they are not “monarchs” in the sense of Henry VIII or the first Elizabeth. They are royalty.

This demotion began with Oliver Cromwell waging a republican war against Charles I, wining that war and chopping off Charles Stuart’s head. Though several kings have succeeded to the throne after the short-lived seventeenth century republic of Cromwell, their powers atrophied and have now ended up with King Charles III who, as Prince of Wales till Thursday, was parodied for talking to plants and selling organic produce from his Duchy of Cornwall enterprise.

In a sense, Britain, which prides itself as the mother of parliamentary systems and has demonstrably replaced the monarchy with titular royalty, retains a trait of tribalism. They want a chief, a hereditary King or Queen, rather than an elected President. The British royalty, besides their massive inherited wealth in land and assets, is supported by the State and therefore by the taxpayer. Britain is happy to pay. The subsidies to royalty don’t come under question in this acknowledged democratic and fairly-elected Parliament — not under Tories or under Labour. Yes, it’s a tribal nation in that respect.

Poor Liz II didn’t have a happy, straightforward family. Her eldest son Charles, now the King, abandoned Diana, his wife and the mother of his two sons and took up with Camilla Parker-Bowles, now Queen Consort. Her daughter Anne went through relationships and divorces. Her son Andrew got involved with the paedophilic sex-scandal of a friendship rwith Ghislaine Maxwell, the convicted pimp of underage girls, and her demanding master, the late Jeffrey Epstein.

And then of course there was the embarrassment of Elizabeth’s grandson Harry and his American wife Meghan Markle attacking the British royals over “racism”. The feud between Prince Harry and his multi-million dollar contracted-by-American-media wife Meghan Markle and his brother and father still continues. There is no doubt that the tittle-tattle from Meghan has to be about the British royal family. Why anyone is interested in her views on anything is, gentle reader, beyond my understanding. If she had a theory about why apples fell to earth instead of going upwards, I might be interested.

The TV tells me that Harry and Meghan went up to Balmoral with the rest of the family. One believes that in times of grief petty differences are forgotten. But is that true when millions of dollars are in pursuit of the gossip of dissension? Gentle reader, I ask this question as I write this column hours after the announcement of the Queen’s death. The hours and days to follow will tell us whether the royal family absorbed their emotions with dignity or whether some of them — and perhaps, gentle reader, you know who I have in mind — exploited even this eventuality for their PR advantage.

Societies with tribal inclinations require chiefs. Britain has through its history found the balance between iconic authority and real effectual power. Perhaps Queen Victoria had some say in what the East India Company did and she was designated the titular ruler when India, after the defeat of the 1857 Mutiny or the First War of Independence, passed to the Raj, but she never had any say in what her viceroys were doing there.

The media tells us that Charles has, as Prince of Wales, sent out letters and directives to government departments, demanding that they do this or that. The communiques have been determinedly ignored. Which is perhaps a pity, as Charles has, over the years, dedicated his efforts to decent planet-saving causes.

Gentle readers, brought up in independent, democratic India, I have no royalist or maharajist inclinations. I suppose I am a republican. Despite that, living in Britain I appreciate the pantomime of British royalty. Let’s call it a circus of perpetually attractive clowns — Meghan accusing the family of racism, Andrew denying in a TV interview that he ever met the young girl he was photographed holding and so being pilloried for paedophilia; Charles saying filthy things about Camilla’s sanitary pads…  Why change it for republican “Presidents” like Boris Johnson or Tony Blair? God save… etc, etc!