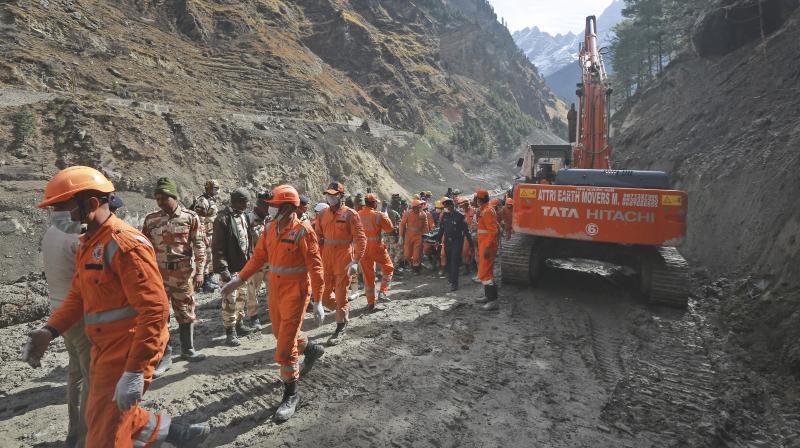 Senior BJP leader Uma Bharati’s first reaction to the terrible news of the Chamoli glacier break/avalanche disaster on Sunday -- “I told you so” – fully aligns with the reservations of all those who put a higher value on conservation than on the development of natural resources for economic growth.

On Sunday, a part of the Nanda Devi glacier broke off and avalanched down, causing a flash flood in the Rishiganga and Dhauliganga -- the upper riverine stretches of the Alakananda, which feeds into the mighty Ganga -- washing away back-to-back dams diverting water into a privately-owned hydro project on the Rishiganga stretch and seriously damaging an under-construction government-owned power generation project at Tapovan.

As minister for water resources in the first BJP government of Narendra Modi, Ms Bharati had dragged her feet on the development of the upper reaches of the Ganga in Uttarakhand -- much to the dismay of gung-ho advocates of development and growth. Conservationists cite the “fragile” structure of the Himalayas to caution against over-exploitation of the riverine system for electricity generation.

Others go so far as to blame the recent much-publicised widening of the highways connecting the Char Dham – the four pilgrimage shrines in Garhwal -- Badrinath, Kedarnath, Gangotri and Yamnotri. Construction of roads is still done the old way, by simply carving additional road width out from the mountain side, causing significant soil erosion both above and below the road. Measures to bind the exposed mountainside using nets or by planting fast-growing ground cover are only a sideshow, rarely given prominence, in already overloaded road construction budgets.

But then, isn’t it always “the growth-wallahs” who stick their necks out by measuring risk versus rewards, even in the playground of the Gods --as the Himalayas are believed to be. On the other hand, it is “safe” to be a conservationist, simply because there are so few downsides to the belief that only the sparing use of natural resources is sustainable. Multiple alternative sources of growth do remain unexploited, like higher productivity in the use of existing resources or the use of alternative “clean” technologies for power generation, like solar or offshore wind.

At times like the present one, in the immediate aftermath of a human tragedy, calculating the trade-off between lives cruelly snatched away from loved ones and the potential economic gains from development seems particularly pointless.

It is also unclear to what extent the disaster is the outcome of over-exploitation of resources in the back-to-back construction of dams to divert water into tunnels to run turbines for electricity generation. The shearing-off of glaciers, causing an avalanche and a flash flood in downstream riverine systems, is a natural calamity. After all, avalanches do happen, and lives are lost.

Doubtless, lessons must and will be learnt, with respect to continuous monitoring of the higher reaches for signs of fragility. Assessing the geological safety of hill development -- extending road access, urban sprawl and related projects -- is no longer a choice. Coupled with the depredations of climate change, already fragile ecosystems could tumble over the edge much faster if the rate and style of intrusive development is not carefully regulated.

How much of a say should local communities have in large projects being created in their midst is another vexed question -- on which there are no clear answers. The “wisdom and public interest orientation” of NIMBY (not in my backyard) communities varies and is often romanticised. In comparison, centralised planning is easy to vilify as representing the cruel, uncaring impositions of rules made by “outsiders”. Ultimately, help must come from science in guiding the government on project site selection and regulations for risk minimisation and occupational safety for project workers.

In 2013, Prime Minister Narendra Modi made history as chief minister of Gujarat by arranging transport for Gujarati pilgrims stranded in the Kedarnath flash floods. In a similar vein, within a day of the incident, R.K. Singh, Union minister for power, visited the damaged NTPC-owned Tapovan hydro generation project.

VIP visits are a traditional, albeit a much-reviled, device for speeding up the release of funds for relief work and energising those engaged in the onerous on-site task of rescue, relief distribution and rehabilitation. But it is a tradition that a politician ignores only at his peril -- after all “we are like that only”. Happily, the minister, previously a civil servant who retired as India’s home secretary -- did more than just that. He was on the button when he commented that the structural safety of glacier formations around large project construction sites in mountainous regions should be monitored for geological stress, much more so than they are done now. Early advance warnings of incipient trouble can enable the evacuation of workers, at the very least.

Adroit operational steps to minimise the downstream damage also mitigated the scale of the disaster. Reportedly, emergency measures to release water stored in downstream dams at Rishikesh and Srinagar helped create the required space to absorb the upstream water shock. All these actions speak to our improving capacity for the safe operation of large water systems. To the credit of the civil administration, households along the affected stretch of the river, potentially under threat from flood waters, were reportedly evacuated as a precaution, though the waters subsided subsequently.

National Disaster Management Authority personnel were also visibly in attendance, although it is unclear whether more boots on the ground, in an area chock-a-block with the security forces, is of additional value. The NDMA, sadly, remains a neglected cousin of the military and the police in terms of their technical capacity, rescue equipment and surge capacity for assisting the local civil authorities.

The bulk of the casualties are of on-site contract workers -- mostly migrants from Uttar Pradesh and Bihar. Hopefully, once these two hydro projects are completed, the memories of those who laid down their lives during their completion will be commemorated in a suitable manner.

The chief minister of Uttarakhand announced Rs 4 lakhs as relief for the families of each of the victims. An additional Rs 2 lakhs each would be given from the Prime Minister’s Relief Fund.

The question which remains unanswered, however, goes far beyond the welfare of the families of the deceased. The jury is still out on what is an acceptable societal trade-off between the risk of mortality and morbidity and the compulsions of economic development.