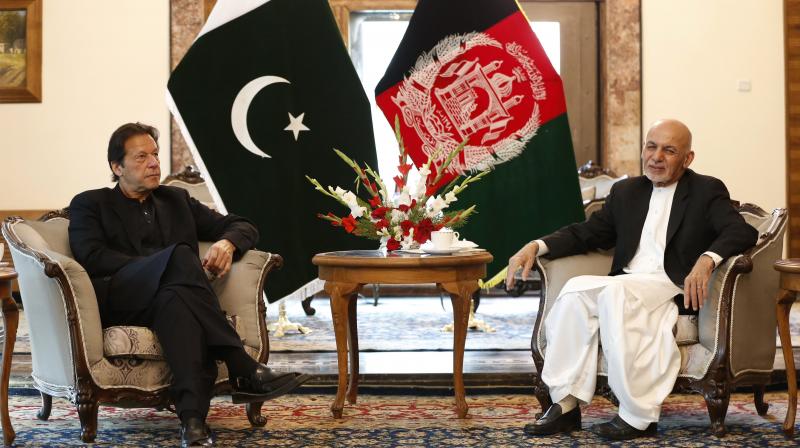 Of concern to India is the United States pushing Afghanistan towards what the draft paper sent to all parties, including the Taliban, calls the Afghanistan Peace Agreement. (Photo: AP)

US President Joe Biden, within two months of taking charge, has moved with speed to implement his domestic and international agenda. His predecessor’s jibe dubbing him “Sleepy Joe” is proving totally wrong. Of concern to India is the United States pushing Afghanistan towards what the draft paper sent to all parties, including the Taliban, calls the “Afghanistan Peace Agreement”. Simultaneously, US secretary of state Anthony Blinken wrote to Afghan President Ashraf Ghani and senior statesman Abdullah Abdullah, urging acceleration of the entire peace process.

The Biden presidency has directly or indirectly impacted other South Asian developments too. India and Pakistan surprisingly announced restoration of the 2003 ceasefire agreement after two years of heavy exchanges along the Line of Control. India ignored its dictum that no de-escalation with Pakistan was possible till it abandoned the use of terror as an adjunct to diplomacy. Pakistan decided to withdraw its precondition that till India restored the status quo ante in Kashmir, normality couldn’t be restored. The US role is more clearly manifest, observing its new exit strategy from the two-decade Afghan conflict.

That the US would treat Pakistan with greater deference than the Trump administration did became clear early after Team Biden began articulating its foreign policy priorities. The retention of Zalmay Khalilzad as US special representative for Afghanistan confirmed continuity rather than innovation in America’s Afghan policy. President Trump fathered the deal with the Taliban and declared a complete US troop withdrawal by May 1, 2021. US troop levels are now down to 2,500. Thus, Mr Blinken’s letters to the two top Afghan leaders and the draft peace agreement, despite the letter which concedes “we have not yet completed our review of the way ahead”, sets out the future path.

While the letter cajoled President Ghani to cooperate through subtle threats and doomsday scenario, the draft peace agreement specifies the next steps, under three sub-headings. One outlines the guiding principles for a new constitution and the future Afghan state. It envisions a multi-ethnic state and the protection of civil, political, economic, social and cultural rights. The second spells out the possible shape of a transitional government that includes separation of powers. The President will be the commander-in-chief, apparently for the seamless integration of Taliban fighters in today’s Afghan Army. He will also retain international relations, perhaps for better coordination with multiple foreign stakeholders, especially regional powers. The third is the need for a “permanent and comprehensive ceasefire”.

Two immediate processes are envisaged. One, the United Nations will be urged to convene the foreign ministers and envoys from “Russia, China, Pakistan, Iran, India and the US”. Separately, Turkey will be asked to host a “senior-level meeting of both sides” -- the Afghan government and the Taliban, in coming weeks to “finalise a peace agreement”. A controversy arose on whether Russia, perhaps on behalf of Pakistan and China, wanted India excluded from the regional group. The old Quadrilateral Coordination Group had the US, Afghanistan, Pakistan and China. Thus, India’s inclusion is acceptance that the regional group would lack balance without India, as the interests of China, Pakistan and Russia mostly converge. In any case, India’s development assistance to Afghanistan has been exemplary and appreciated by the ordinary Afghan.

But the United States has unlevelled the playing field by scaling back its military presence. The Afghan Army is unable to control anything more than the larger population centres. Even in Kandahar, the country’s second-largest city with great symbolic significance for the Taliban, the land access is with the Taliban. Mr Blinken’s letter ends with the warning that a US troop withdrawal by May 1 is a possibility and thereafter, even with US financial assistance for the Afghan Army, “the security situation will worsen and that the Taliban could make rapid territorial gains.” This is a surrender to the Taliban-Pakistan interests even before a dialogue begins.

This perhaps explains the Pakistan Army accepting a ceasefire at the Line of Control with India. They can see the balance of forces in Afghanistan tilting in their favour. Thus, they are willing to put their Kashmir strategy on hold, trying through a dialogue and America’s urgings for the status quo to be restored, while they consolidate their advantage in the west, especially by negating India’s role in a post-Ghani Afghanistan. It would be delusional to assume the Pakistan Army has swallowed the altered status quo in J&K.

Indian options are circumscribed by mutated regional geopolitics compared to the late 1990s after Kabul fell to the Taliban in 1996. First, India-Iran-Russia then had total convergence of strategic interests to ensure that the Taliban couldn’t capture northern Afghanistan. The three coordinated to keep the Northern Alliance alive and the Panjshir valley free, while Ahmad Shah Masood lived. Iran’s western border was still blocked by an inimical Saddam Hussein. Today that alliance is one in name only, as shown by the controversy over Russia’s role in barring India from the regional grouping.

Moreover, Iran’s primary strategic interest is in getting US and other sanctions lifted and retaining control over “Shia Crescent” that runs through Shia-majority Iraq, Syria and Lebanon. Today the Iran-Taliban ties are workable if not warm, with the Taliban curbing its anti-Shia zeal for the larger strategic goal of reducing its dependence on Pakistan. Iran provides an alternative exit to the open seas, and both distrust the US.

The transition in Afghanistan will be tricky. Taliban tactics of fight-and-talk worked for them, particularly with the US broadcasting its military exit. Why will they accept a “permanent and comprehensive” ceasefire without gaining substantial control over the transitional government? The Afghan government needs money and air cover for special forces, about a quarter of the total army, well trained by the US and doing the critical fighting as the regular forces buckle. India might be able to finance but can hardly replace the US level of air cover with drones, armed helicopters and medivacs. Can India engage the Taliban, despite Pakistani objections? The Taliban too will need development aid, which even now is largely channelled in the rural hinterland through them as the government lacks access. But a constant negative will be the BJP’s minority-bashing majoritarian politics and its Kashmir policy. Pakistan will count on that to keep India in the Taliban’s bad books. As the US exits, India must redesign its approach to an altered AfPak salient. India’s domestic and neighbourhood policies are scraping against each other. The looming Assembly elections, particularly in West Bengal and Assam, will show whether even the Indian masses are tiring of divisive and jingoistic politics.