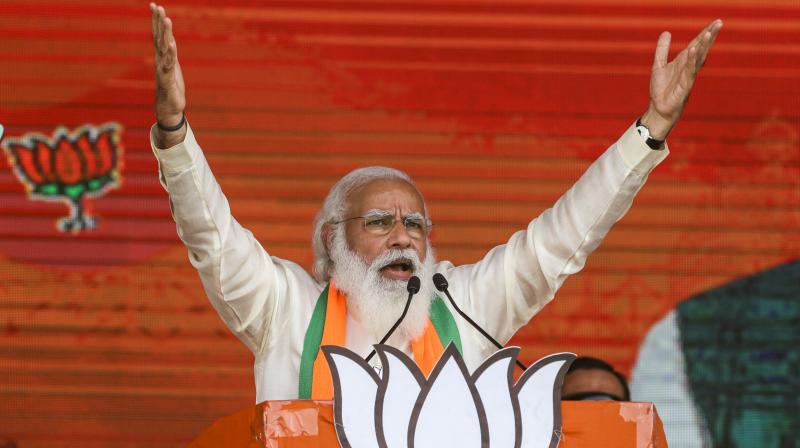 The focus of the Assembly elections in four states and a Union territory has centred around West Bengal and the big question is whether the BJP under PM Modi will breach the final barrier, as it were, for the right-wing saffron party. (AP/Bikas Das)

The focus of the Assembly elections in four states and a Union territory --starting at the end of this month and spread over the whole of April — in West Bengal and Assam in the east, and Tamil Nadu, Puducherry and Kerala in the south — has centred around West Bengal and the big question is whether the BJP under Prime Minister Narendra Modi will breach the final barrier, as it were, for the right-wing saffron party. It has turned out to be a battle between West Bengal chief minister Mamata Banerjee of the Trinamul Congress and Prime Minister Modi of the BJP. As has become the norm with the Modi-centric BJP in the past seven years, the laurels for the victory always go to Mr Modi because the party is but a symbol for the most domineering politician in the country today. The reality, of course, is much more complicated and the magic factor of Mr Modi has huge limitations.

Though the party had won Assam in 2016 for the first time, the right-wing majoritarian sentiment in that state was well represented by the Congress and the Asom Gana Parishad (AGP) from 1985 onwards. The breakthrough for the BJP in Assam in 2016 has nothing radical about it. Assam, however, poses its own set of challenges for the BJP this time round. The Citizenship Amendment Act (CAA), with its vicious Hindutva slant, is a sore point in the state where Bangladeshi migrants — whether Hindu or Muslim — are the source of local resentment and discontent. The Hindutva rhetoric does not mean much here.

West Bengal remains the big prize in the east for the BJP. It has eluded the party with its majoritarian colours. The party considers this election as the final push at the final frontier. That is why it has become much too loud and much too bitter. The CPI(M)-led Left Front and the Congress still remain marginal players. And the battle between Mr Modi and Ms Banerjee, despite the Prime Minister’s pan-Indian standing, is reduced to a local tussle. If Ms Banerjee prevails, it will be a huge blow to Mr Modi. And the bets are hugely hedged in the matter.

In Tamil Nadu and in Kerala, the BJP is a small player. It is reconciled to play second fiddle to the ruling All India Anna Dravida Munnetra Kazhagam (AIADMK) in Tamil Nadu and confined to the 20 Assembly seats allotted to it. It would have to ride to victory on the back of the AIADMK because it has no presence of its own. The BJP cannot hope to give wings to its Hindutva ideology in the state because the Dravidian politics — (anti-Hindi and indirectly anti-North Indian variant of Hinduism represented by the BJP) and the Hindutva nationalism, again a North Indian concoction — does not pass muster. Even the Congress, with its benign pan-Indian outlook, has become a small player in Tamil Nadu and it has been given just 25 seats in these elections by the dominant regional Opposition party, the Dravida Munnetra Kazhagam (DMK). After the death of the icons, the DMK’s Karunanidhi and the AIADMK’s Jayalaltihaa, it seemed the spell of Dravidian politics would end, and national parties like the Congress and new entrants like the BJP would become the big players. The seat allocation for the two national parties by the dominant reginal parties is a clear indication that the local in terms of ideology outflanks the national in Tamil Nadu. Tamil and Dravidian nationalism are unlikely to fade away simply because the stars who represented them have died.

Unlike in West Bengal, the Left Democratic Front (LDF) led by the CPI(M) and the United Democratic Front (UDF) led by the Congress in Kerala leave no space for a new player with a north Indian ideology to break into the crowded political space in the country. Kerala is a complex mosaic of castes and communities, where the Nayars and Ezhavas on one hand, Christians and Muslims and the Communists jostle with each other. The Rashtriya Swayamsevak Sangh (RSS) has been fighting a fierce and bloody battle with the Marxists in parts of northern Kerala. Political violence is as rampant in Kerala as it is in West Bengal. The RSS and the Marxists have been hacking each other’s cadres with ruthless regularity. The BJP has been trying to use the RSS’ base to make headway, but it has not succeeded in any major way.

The dominant parties in all these poll-bound states are forced to reckon with the smaller political formations. In Assam, the BJP cannot afford to ignore the Bodos. When the Bodo People’s Front broke away from the BJP-led National Democratic Alliance (NDA), the BJP had to find place for the United People’s Party Liberal, and the Congress has to accommodate the Assam Jatiya Parishad (AJP) and Raijor Dal. India is infuriatingly diverse for hegemonic national parties like the BJP and the Congress.

The Assembly elections are a time for the rest of the country to know how each state has its own identity and politics and that it is not a referendum for the ruling party at the Centre. It is this entrenched democratic pluralism that checks the free run of parties such as the BJP with their regimented mindsets forged in RSS shakhas. The BJP is struggling to come to terms with the political diversity and pluralism of this country. The authoritarian populism as practised by Mr Modi and his second-in-command, Union home minister Amit Shah, serve only as a stumbling block in the Assembly elections, especially in places like Tamil Nadu, Kerala, and to a great extent in West Bengal and Assam.

Even in Puducherry, after engineering defections from the ruling Congress, the BJP did not find it very easy to come to power. The right-wing party is learning the hard way that multitudinous India is a multipolar political field. And there is no option but to adapt to India’s political multiverse. This is why the majoritarian tyranny of the BJP kind has to give way to rainbow coalitions. Assembly elections in India are always a lesson in democratic politics.