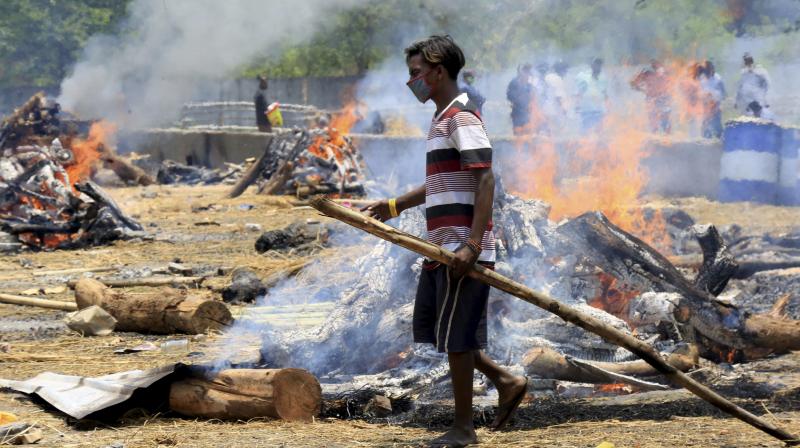 The world is worried about its “Vishwa Guru” as our mismanagement of the Covid-19 pandemic has turned into a global story. The Institute for Health Metrics and Evaluation, an independent research centre in the United States, has estimated that by September 2021, which means in just four months, another million Indians will die. And this is based on the official numbers, which are anyway difficult to accept given what has been revealed by the scenes in the crematoria across states and in our major cities, and also by the numbers that the newspapers have put out. A newspaper in Gujarat reported on May 6 that 17,822 bodies had been cremated or buried with Covid-19 protocols in one month in the state’s seven major cities -- Ahmedabad, Gandhinagar, Baroda, Surat, Rajkot, Jamnagar and Bhavnagar.

But the government had acknowledged only 1,745 deaths officially from Covid-19, or 10 per cent. And remember that these cities are only about a third or less of the state’s total population. In the villages, the chances of those being tested and treated are even fewer.

This is, of course, not only about Gujarat. On May 3, a newspaper had reported that Bhopal had acknowledged only 104 deaths from Covid-19 while reports from the crematoriums and cemeteries spoke of 2,557 Covid patients among the total of 3,811 who were cremated or interred. That is a ratio of 1:25. A report on May 4 from Haryana said that the difference between the official death toll and the number from crematoria was 1:2. This is similar to the number reported for Bengaluru for the last one month (1,422 official toll; versus 3,104 cremated with Covid-19 protocols). In Uttar Pradesh, a report from Meerut said the difference was 1:7.

If we remove the outliers and look at the data, it seems like a figure of twice and perhaps three times the official one is not unreasonable. If we take that into account, our official death toll of 2.3 lakhs, the third-highest in the world, actually looks like 5.6 lakh or more than seven lakh and easily the highest in the world. This will not surprise anyone and has been borne out by the saddening and shameful and horrific visuals that the entire world has now seen from India.

I should clarify that the fudging of the numbers is not entirely because of governmental fraud. It has happened in part because most people are dying at home, unable to access medical facilities or unable to afford them and they have not been tested. Second, how a death is classified depends a lot on the state government and the people making out the certificate. A person who has Covid-19 but also has another disease can be classified either as a Covid death or as something else. It serves the immediate purpose of the government to pretend that the official number is low because it makes it appear less incompetent and helpless than it really is. But hiding the number and not actively promoting the fact that things are much worse is dangerous for us all.

The first reason why the government should come clean and say that its numbers are an undercount is public safety. If people are fed nonsense like “recovery rate” (a meaningless number for a disease that has no cure), then they will be less alert and more prone to carelessness about masking and social distancing. If they knew that many more people are dying after being infected, especially because the government cannot manage hospitals at this point in time, they would not think they were personally safe.

The second reason is our shortage of oxygen. After Delhi, now two BJP-run states, Gujarat and Karnataka, have said that they are not getting enough oxygen from the Narendra Modi government. Gujarat has said it needs 1,400 tons a day and will need 1,600 tons a day by May 15 but is currently getting only 795 tons. Karnataka had asked for 1,200 tons instead of the 962 tons allocated by the Centre.

The Central government says that it has enough oxygen but this is untrue. We do not. And we will make our jobs more difficult if we continue to be in denial.

The third reason is credibility. The world is reporting the Indian numbers and saying that these cannot be believed. And the world cannot be blamed for feeling this, because it is true -- based on what our own media is reporting. The damage to India has already been considerable in terms of reputation, but that is not important. What will happen is that more countries will ban the entry of Indian travellers. Already that list is quite large. In time the wave will recede, but another one is likely to come. At that point, the world will look at our official numbers and try and add a factor of their own to arrive at the real number if they think that we are still fudging. This will harm Indians on work visas, families who are separated and Indian business in general.

That is why in our self-interest we should actively make attempts to find out the real fatality rate as the first step towards trying to curb this deadly Covid-19 pandemic.