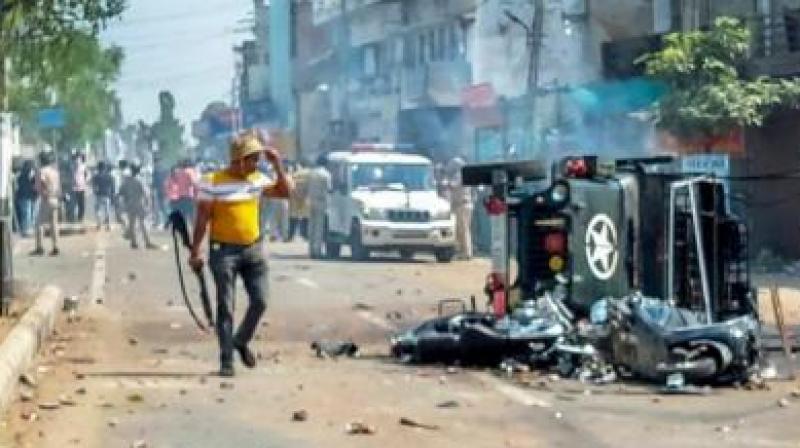 Years ago, I had enraged my mother by getting a “fringe cut”, like the one popularised by a movie star named Sadhana. In fact, across India, the “Sadhana cut” was a craze, and frankly, it looked gross. This week has been dominated by a different sort of “fringe” -- the one that has “elements” in it. Suspended BJP spokesperson Nupur Sharma and expelled head of the party’s Delhi media unit, Naveen Kumar Jindal, were disingenuously described as “fringe elements” by the BJP’s top guns, after both committed epic boo-boos that India will be forced to deal with for a while to come. At the moment, we are in the khachra ka dabba, with countries like Libya, Indonesia, Saudi Arabia, UAE, Jordan, Bahrain and Afghanistan joining Qatar, Kuwait and Iran in condemning the culprits (Nupur Sharma and Naveen Jindal) who have landed the nation in one of the most embarrassing diplomatic debacles in recent memory. Rahul Baba, pretty “fringe” himself, has added his two bits worth to the debate saying that “Fringe is the BJP’s core”.

Merely dismissing off the two loudmouths with that snooty put down (“fringe elements”) is like ticking off juvenile sex offenders by calling them “over active”.  It means nothing, given the gravity of the crisis. “Fringe elements” have no business to be in such sensitive positions to begin with. Photographs of Nupur Sharma with all the BJP top brass went viral right after her gaffe in a television debate. BJP netas follow Ms Sharma on Twitter. Call that “fringe”? Come on, damage control wing of the BJP -- you can do better.  One assumes the party had nominated Ms Sharma and Mr Jindal to these key posts after conducting due diligence. Were they unaware of their hateful anti-Muslim leanings? Or were they picked BECAUSE of them? This is where the problem lies. Did they get their posts by default or by design? Their rabid, anti-Muslim utterings have taken them places in the past. Perhaps they were even “rewarded” for crossing all lines of civility. But this time, their unspeakably awful comments backfired -- and how! Did they expect to be shielded yet again after shooting their mouths off and triggering an avalanche of global condemnation and criticism? For the first few days after making those outrageous remarks claiming that they were “provoked”, there was radio silence from the bosses.

History has demonstrated over and over again that all it takes for mighty empires to crumble and fall is one fatal mistake. Is this that mistake? The carefully constructed BJP narrative seems to be on shaky grounds after this major international faux pas. All the official rhetoric has crumbled, after the duo shot themselves (and the country) in the foot. Maybe a pat on the back was privately given -- we’ll never know.

Such demonic grand standing is not unique. Every political party recruits, trains and richly rewards barking canines who spout hatred and cause irreparable rifts. Some favourite canines are given important designations with matching perks, while others do it gratis in order to suck up to the bosses and show them how far they’re willing to go to curry favour. Chamchagiri and exceeding the brief comes easily to desis. Toadies move up much faster in the food chain, than those who play safe. However, in this instance, the BJP has a gigantic omlette on its face, given the open snub India had to deal with, when the Deputy Emir of Qatar cancelled a scheduled dinner with India’s vice-president (M. Venkaiah Naidu) who was on a state visit. “Health grounds” were cited for the cancellation. Clumsy apologies did nothing to mollify the miffed Middle East rulers, who did not mince words when condemning the comments and accusing the Indian authorities of a slow response. Irony: some of these rulers are guilty of far worse transgressions.
But must we follow the bad example of “illiberal countries” to justify our insults to other religions?

Frankly, who can blame Ms Sharma and Mr Jindal for their total lack of decency?

They must’ve genuinely believed they were doing their jobs and putting the Muslims in their place. It’s a terrible and common stance taken by flunkies out to impress their bigoted netas. But the scary thing is that they do what they do at someone’s bidding! But wait -- the real problem is with the original tune -- not the chorus! If officially appointed spokespersons can be suspended and called “fringe elements”, what does that say about those who had appointed them?

I put out a tweet about the “fringe” but tagged the wrong Sharma. Within seconds the other Sharma had hit back, calling me a “botoxed floozie” and worse. I think she was upset I didn’t know who she was! Oh well… that’s the pathetic ego level we are dealing with on a daily basis. At the time of writing, some sort of a truce has been brokered with our allies in the Middle East. We are interdependent after all, and can hardly afford a long standoff given the precarious global situation right now. Kissing and making up this time around is not going to be a cakewalk… too many self-goals have made India vulnerable at a time when we were holding our own pretty smartly, and scoring big on foreign policy. Try as we might, sweeping this diplomatic disaster under the carpet is going to take a lot of doing. We have literally played into the hands of India-baiters and given the critics enough ammo to gun for us globally. Meanwhile, the disgraced “fringe elements” may have been advised to lie low and wait for this nasty imbroglio to end. I’m taking a small bet… they will soon be accommodated and welcomed back into the fold, once the heat is turned off. Let’s not make a vamp out of Nupur Sharma nor call Naveen Kumar Jindal a villain -- they are mere puppets and mouthpieces, and were not speaking in their personal capacity. Sacking them will not solve a thing. It only deflects attention from the real culprits, and lets them off the hook.

The international community is watching what happens next. Meticulously curated hate has raised its ugly head once again, and civil society in India is mortified. Has the nation’s mood made a paradigm shift? Will the suppliant desi press prostrate still further and keep groveling? Will at least a few independent voices speak up and openly condemn those who insult religious sentiments? How long will we pretend that we have nothing to do with this obnoxious “Fringe Festival of Hate”?