Pavan K. Varma | All equal before lucre lure is theory of resort dharma 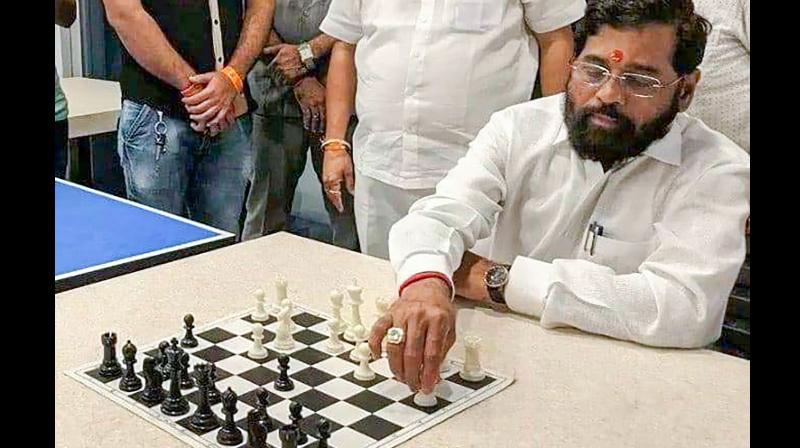 Rebel Shiv Sena leader Eknath Shinde plays chess at a hotel where he was staying with supporting MLAs, in Guwahati. (PTI)

After the recent developments in Maharashtra, I sometimes think the time has come to amend the Constitution and add a clause that recognises and legitimises resort politics. The makers of our Constitution created a framework for the working of a mature and principled parliamentary democracy. However, it appears that they were woefully shortsighted. They did not take into account the versatility of Indian politicians, who have mainstreamed certain aberrations to such an extent that they have become standard features of the functioning of the world’s largest democracy.

The list of official entitlements of our MLAs also needs to be amended. It should now include mandatory stay in luxurious hotels and travel in exclusive chartered planes, whenever there is a need to topple governments or win Rajya Sabha elections. There was a time when ostentatious displays of wealth, especially by public representatives, was frowned upon. No longer. In the service of power at any cost, MLAs have not only to be sequestered but provided every form of luxury. There are anecdotal stories about what goes on in these resorts. Every whim of the precious MLAs is pampered. No expense is spared. Their loyalty has literally to be bought.

Eknath Shinde, who led the revolt in the Shiv Sena against Uddhav Thackeray, left on June 21 with his flock of rebel legislators in a chartered flight for the Le Meridian in Surat, Gujarat, where the BJP is in power. After the MLAs were duly rested, they left the next day on a Bharat Darshan. Their next stop by chartered flight was to the other end of the country, the Radisson Blu Hotel in Guwahati, Assam, which again is a BJP-ruled state. After enjoying the five-star comforts here for over a week, they left on June 29 in luxury buses for the airport, this time enroute in their chartered flight to Goa, another BJP-run state. Their address here was the Taj Resort, where reportedly 72 rooms had been booked. Finally, they returned to Mumbai, again by a special flight, but only a day before the floor test in the Assembly on July 4. The luxury junket had served its high purpose. Uddhav tendered his resignation. Eknath Shinde was sworn in as chief minister. The BJP, as alliance partner, was back in power. ‘Democracy’ triumphed. ‘Ideology’ won.

But resort politics is not only the monopoly of the BJP. In June itself this year, when the Rajya Sabha elections were due in Rajasthan, the ruling Congress party took 70 of its MLAs to a luxury resort in Udaipur. Uddhav Thackeray, a victim of resort politics, did the same for the Rajya Sabha elections in Maharashtra. His MLAs were first cloistered in a resort in suburban Malad, and then moved to a five-star hotel in south Mumbai. After the March 2022 Assembly elections in Goa, the Congress moved its leaders to a resort in north Goa. Two years earlier, in Bengaluru, Congress leaders were housed in complete security at the well-appointed Prestige Golf Club. In fact, resort politics has a hoary precedent. As far back as 1983, Ramakrishna Hegde, then chief minister of Karnataka, sought to prevent the Congress from toppling his government by sending 80 of his MLAs to a luxury resort in Bengaluru.

Some important questions arise. Where is the money for these hugely expensive junkets coming from? Who makes the payments? Must our MLAs only be housed in luxury hotels and resorts? How is the money for such ‘investments’ recouped? Why does the state police provide them such heavy security at the expense of the taxpayer? It has been reported that when the MLAs were in Goa, the Goa police went so far as to stringently police the Goa-Maharashtra border to screen anyone who could be an emissary of Uddhav’s camp. Moreover, what is the need to guard these elected worthies so zealously? Is their ideology and political conviction so fragile that they have to be somehow quarantined against any inducements offered by the opposing side? Is it the norm today that every MLA is up for sale, and given the right price in cash or kind, will happily change sides?

What is the role of ED and I-T, and other state agencies, in ensuring an MLA’s allegiance? In the case of the rebel Shiv Sena MLAs, it has been reported that 21 of them had legal cases against them. Were they told that if they associate with the BJP, the heat would be off? One doesn’t know, but certainly, there are enough cases where politicians in the Opposition facing prosecution proceedings feel a great deal of relief when they switch to the BJP.

And what about the anti-defection law? The governor ordered a floor test within 24 hours of being informed that the MVA government has lost its majority. The Supreme Court was at this very time considering a petition by the Deputy Speaker disqualifying 16 rebel MLAs. Meanwhile, a notice was also pending before the apex court for the removal of the Deputy Speaker. The Supreme Court authorised the floor test even while posting the case against the disqualification of rebel Shiv Sena MLAs for July 11.

Is there any surprise that the common citizen is completely confused? But what he or she knows is that Indian democracy has become a circus where the dance of money goes on, and all principles have been thrown to the winds. Only the end is important. The means do not matter. Even the fig leaf of public probity has been jettisoned. Power is the paramount goal, and must be obtained at any cost. The BJP claimed that it is a party with a difference. But it seems the lure of political power makes even the supposedly different similar. The monetary sauce is the same, whether it is the goose or the gander, with this difference that the party which has more money spends it more lavishly. The only beneficiary of such a sordid state of affairs are luxury hotels and resorts. And, the operators of chartered flights.