One of the most crucial announcements in the Budget was with regard to infrastructure development projects, across various states and UT's 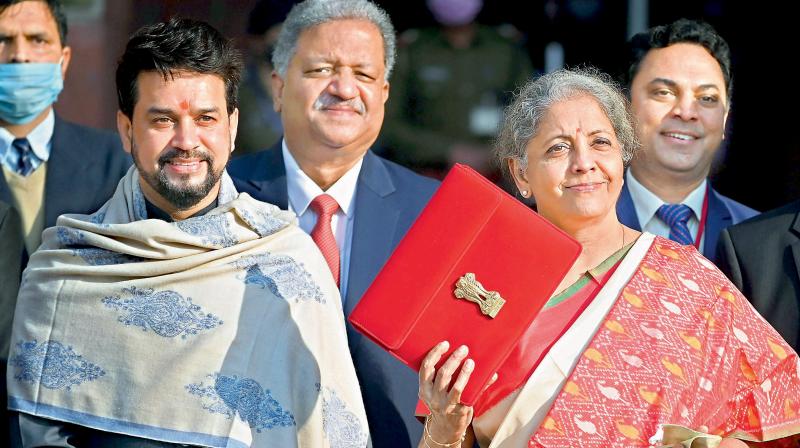 Amidst a global pandemic, India’s overall allocation for health and well-being increased by 137 per cent in the financial year 2021-22, thus boosting the capacity of the healthcare system to detect and cure new diseases. (Photo: AFP)

The first Union Budget of this decade comes at a time that our nation is commemorating the 75th year of Indian Independence, 60 years of Goa’s accession to India, 50 years of the 1971 India-Pakistan War, eight censuses of Independent India (and also the first digital census), India’s turn at the BRICS presidency, the Chandrayaan-3 mission and the celebration of Haridwar Maha Kumbh. Under this scenario, India has a vital role to play as a major Asian economic power in the new world order in the post-Covid era.

The Union Budget 2021-22, along with the myriad mini-budgets, including the Pradhan Mantri Garib Kalyan Yojana and the Atma Nirbhar Bharat packages, presented by the finance minister to stabilise the economy during a critical pandemic period, has prepared our country to move in the right direction.

Under the leadership of Prime Minister Narendra Modi, the Budget addresses the imperative of resetting priorities and identifies the emergence of opportunities by devoting an “all-inclusive Budget” as a guide to a “self-reliant India”.

The development of any nation depends on transportation networks and the way in which they are maintained. One of the most crucial announcements in the Budget was with regard to infrastructure development projects, across various states and Union territories.

For connecting the areas and maintaining smooth flow of traffic, the construction of new roads is a must. The infrastructure projects are not just connectivity specific, like the proposed highway works and upgrade of the existing 675 km Kolkata-Siliguri highway bisecting the state of West Bengal, but also employment-generating opportunities.

Further, as Union territories receive 100 per cent of their funding from the central government, long-stalled projects are being revived and new welfare projects implemented.

The budget has provisioned Rs 30,757 crore for Jammu and Kashmir, the highest among UTs. The announcement of a maiden gas pipeline in J&K has further rekindled hopes for the revival of the project that, due to a paucity of funds and the lack of an administrative push, showed no progress for a decade. This gas pipeline project will create a base for increased beneficiary coverage under the Ujjwala Yojana as well as decrease carbon footprint by increasing utilisation of clean fuel for cooking purposes.

This connectivity upgrade also envisions the development of modern fishing harbours and fish landing centres along the banks of rivers and waterways. The government has provisioned for developing five major fishing harbours — Kochi, Chennai, Visakhapatnam, Paradip and Petuaghat — as hubs of economic activity. The development of fishing harbours would help in exploitation of rich fishing grounds, create adequate infrastructure for operation of mechanised fishing vessels, mitigate navigation hazards, save fishermen’s lives and fishing vessels from the rough seas, make for the handling of fish and crustaceans in hygienic conditions, and, thereby, enhance export earnings.

The first-ever paperless Budget also gave a major boost to the start-up ecosystem in India, with the objective of encouraging entrepreneurship and fostering growth. Recently, 11 Indian start-ups managed to bag a unicorn tag in a pandemic year when they crossed the US $1 billion valuation mark.
Prime Minister Modi has averred that start-ups are changing the demographic characteristics of today’s businesses. Further, start-ups played a major role in ensuring availability of sanitizers, PPE kits and related supply chains, and fulfilled a sterling role in meeting local needs like grocery, medicine delivery at doorstep, transportation of frontline workers and online study material. The Budget provided a boost to start-up investments by extending the eligibility for claiming tax holidays for start-ups along with a capital gains exemption for investment in start-ups till March 31, 2022.

Modi has ushered in a wave of behavioural change among people with the Swachh Bharat Abhiyan. The pandemic made swachhta an integral lifestyle and a practice that has seen increased community participation.

For further swachhta of urban India, the government raised the focus on complete faecal sludge management and wastewater treatment, source segregation of garbage, reduction in single-use plastic, reduction in air pollution by effectively managing waste from construction and demolition activities and bioremediation of all legacy dump sites. The Urban Swachh Bharat Mission 2.0 is being implemented with a total financial allocation of Rs 1,41,678 crores over a period of five years.

Amidst a global pandemic, India’s overall allocation for health and well-being increased by 137 per cent in the financial year 2021-22, thus boosting the capacity of the healthcare system to detect and cure new diseases.

Underscoring the importance of strengthening the healthcare infrastructure, the government launched the PM Atma Nirbhar Swasth Bharat Yojana, with an outlay of about Rs 64,180 crore over six years. The scheme will concentrate on bridging the health infrastructure gap at the village, block and panchayat levels and integrate them with centralised healthcare facilities.

Today, India has indigenously manufactured a vaccine and has begun medically safeguarding not only its own citizens against Covid-19, but also those of 100 or more countries under its Vaccine Maitri outreach. Our nation has strengthened its ethos of vasudhaiva kutumbakam while turning a crisis into an opportunity for developing “self-reliance” and presented a budget with an eye on future growth.