Farrukh Dhondy | The Kohinoor for Camilla? It’s high time it is back home…

It is possible that Prince Charles, being the fair-minded bloke he is, decides to persuade Camilla to repatriate the Kohinoor to India 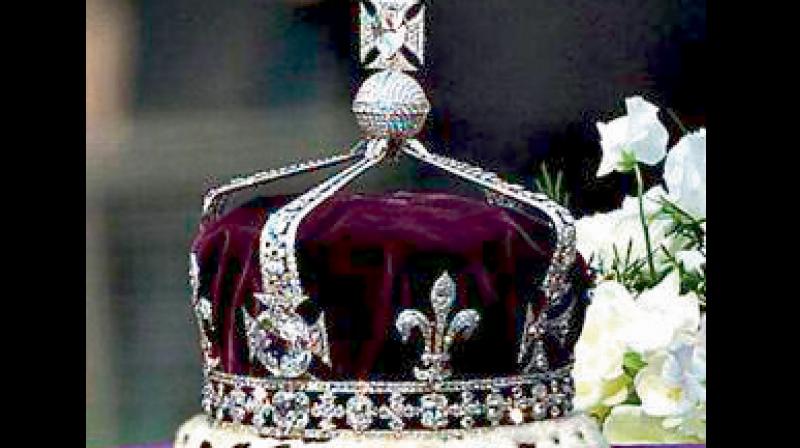 “The magpie asked a trespassing crow
Why he didn’t make a clacking sound
And why his squawk was not profound
And why his plumage didn’t glow
Like the magpie’s white and blue?
To which the unfazed crow replied
My caw and my colour are my joy and pride
And that’s a parable for you.”

I am certain — or inclined to think — that the distinguished parliamentarian, novelist, stand-up comic and advocate of reparations for imperial injustices Shashi Tharoor has noted that Queen Elizabeth II has decreed that the crown containing the Kohinoor diamond shall pass, when she passes, to Camilla, the wife of Prince Charles. Perhaps Shashi will write a book objecting to this piratical heritage. Or if time doesn’t permit, he should at least, as the leading campaigner against colonial loot, give lectures about such impudence. Maybe he won’t and so, gentle reader, I take it upon myself to publicise this historical travesty.

This question of reparations for colonial injustice and for the looting of the colonies has always been problematic. Even if the British, Dutch, Spanish and French monarchs or governments recognise such claims from their former colonies, to whom would these reparations be paid? If to the current governments of the subcontinent, Africa, South America or Indonesia, mightn’t millions or billions of pounds or euros end up in politicians’ secret accounts in Dubai or Switzerland?

When Afro-Americans demand reparations — not the two acres of land and a donkey they were once promised when slavery was abolished after the American Civil War — they have a case, and it is clear that all such monies could be paid by the US treasury to every black individual who had less accountable wealth than a generously specified sum. Black millionaires shouldn’t get anything.

My humble suggestion for such reparations to the ex-colonies would be that the colonising nations provide the capital to abolish poverty in these nations forever.

Obviously, the definition of poverty differs from age to age and nation to nation, but it would be relatively easy or at least possible to set, through a democratic procedure, a threshold in each case.

Related to this question of reparations is that of the repatriation of loot — which brings us from the Elgin Marbles in the British Museum and a few thousand other artefacts therein, back to the Kohinoor diamond.

Unlike my uncertainty about Shashi’s awareness and intentions, I am more than convinced that Her Majesty Queen Elizabeth II is au fait with the history of the diamond — and if not with its complete narrative, at least with the fact that it carries a deadly curse which comes into play when the Kohinoor is in the possession of, or belongs to, a man. Women are spared the curse of the K.

As some of us know — and to those who don’t I would highly recommend the book about the Kohinoor written by the brilliant William Dalrymple and Anita Anand (Are you using this publication’s space to wangle an invitation to the Jaipur Literary Festival? — Ed. Why, Sirji, attributing all this base matlabi motivation to sincere garib manush? — fd) — the Kohinoor came into the possession of the Brits when Governor General Lord Dalhousie stole it from the young Raja Dilip Singh. Dalhousie knew the bloody and tragic history of Dilip Singh’s family, starting with the death of Ranjit Singh and subsequent disasters that befell his uncles. He promptly gifted the Kohinoor to Queen Victoria and even fabricated the pretext that it had never been in his possession but that Dilip was willingly bestowing the diamond on the Queen.

Clearly Liz 2, knowing about the curse, is handing the diamond to Camilla and, withdrawing her coolness towards her daughter-in-law, has announced that she would be known as the Queen Consort when Charles was crowned.

What I am now almost certain of, gentle reader, is that Camilla doesn’t know a thing about the diamond, about its history or the curse it carries. I have no idea whether the Duchess of Cornwall is an avid reader or indeed has the time, with all her charitable duties and consumption of cigarettes and alcohol, to read the aforementioned, recommended book. I am inclined instead to offer my personal services, for an appropriate if modest fee, to instruct her in the origins and progress through several regimes and countries, several tragedies and vengeful triumphs of the jewel through history. This instruction could be delivered in person or by Zoom if that’s deemed more appropriate and would save me travelling on the crowded Tube during these Covid-ridden weeks.

I shall convince her that the Kohinoor doesn’t belong on this earth at all. It was in the god Surya’s crown in Swarg when his wife persuaded him to cast it down to earth so that all the vanities, greed and nasty stratagems of human beings could be tested.

It is of course possible that Prince Charles, being the fair-minded bloke he is, decides to persuade Camilla to repatriate the Kohinoor to India. If that happens, I would strongly urge Shashi not to accept the invitation to carry it back from the Tower of London to New Delhi or wherever. He shouldn’t even possess it as a caretaker for a few hours on Air India. Since it came from the Ganga in Uttar Pradesh, perhaps it should be held by chief minister Yogi Adityanath?