Abhijit Bhattacharyya | Throw Chinese out of India’s economy; war is not an option 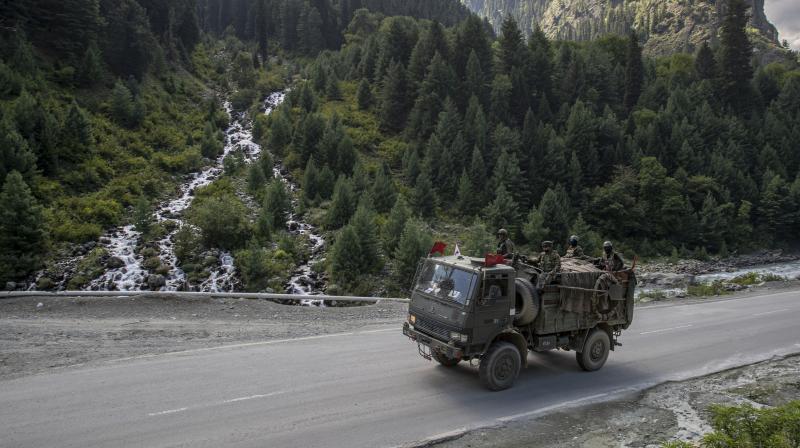 As India’s resources to protect its workers and companies is limited, the prospect gets gloomier. AFP Photo

As the tense standoff with China in Ladakh worsens, with shots fired at the Line of Actual Control for the first time in 45 years, the battle drums are beating in some quarters and there is loose talk of a “short war” in the next few months.

That is ill-advised, and a reality check is in order.

The story read: “Not long ago, India’s future looked entirely different… A sense of malaise is creeping… (as) China is increasingly muscling into Indian territory”. September 4’s Wall Street Journal was dismal too: “Economies reel in developing world”.

Those talking of war have no idea of the economic disaster it will inevitably inflict. India’s ruling class has never fully understood, or effectively dealt with, the Communist Party of China, and wishful thinkers actually hoped the CPC would offer a magic wand for India’s economic upliftment.

That was never to be: ever since 1971 at least, when Henry Kissinger and his boss Richard Nixon reached out to Beijing, China’s focus was firmly set on America. No matter that the CPC constitution’s original 1954 preamble clearly named the US as “enemy number one”.

Where did India figure? Nowhere! The Han Chinese saw it as an “inferior” neighbour that could be used (and discarded) as a crutch in some sectors, as a “market of consumers, crazy for foreign goods; industry devoid of technology upgrades; capital and investment-starved; and banks riddled with mega fraudsters and bad loans”.

Amid all this, an invisible Han-produced chemical/biological warfare-type salvo was enough to extinguish all enterprise, set India on the road to ruin, and knocked the aspiring power off its growth trajectory. “The economy of India shrank by 23.9 per cent a quarter, its worst performance since the 1996 figures,” WSJ reported.

As India’s resources to protect its workers and companies is limited, the prospect gets gloomier. “While rich countries can print more currency or take on debt at low cost, such a move by less fortunate nations” like India (will) enhance financial instability.

See the larger picture again. Latin America lost 26.5 million jobs, but one country, India, sources suggest, lost 40 million-plus jobs. Brazil began one of the largest aid programmes… giving $100 monthly to individuals, $200 to families; and the US gave $600 to jobless workers, in addition to other benefits. Has India done anything comparable? No, because it doesn’t have the resources.

India’s economics has collapsed like a house of cards, in less than six months of the Chinese virus.

The Chinese have put India squarely on the mat, internally and externally. Their so-called “investment” resorted to long, deep penetration of India’s private HDFC and ICICI Banks. They are everywhere, from telecoms to automobiles, with the likes of Great Wall Auto waiting to enter, expand and finish off established Indian carmakers.

For India, however, the dilemma is rapidly depleting revenue and rising expenditure. Given this background, India must not even think about a “physical war”. Instead, tackle the enemy through a “finance war”.
It must not fall into the Chinese trap. No one can predict the fallout of a war. If it lasts 15 days, for example, it may cause the death of upto 15,000 soldiers and three times more casualties.

Further, where will India fight? On its own territory – some of which has been occupied by force by the PLA? According to some calculations, 1,000 sq km has gone to the Chinese in this century itself: Depsang 900 sq km; Pangong 65 sq km; Chushul 20 sq km; Galwan 20 sq km.

India fought to regain its own territory at Haji Pir in 1965. In Kargil 1999 too, India fought for its own land. There were mind-boggling casualties in both clashes with Pakistan.

With China, things will be far, far worse, further damaging the economy, as the Chinese remain entrenched in India. That is not prudent, and a change in strategy is called for.

First, hit the Chinese companies lock, stock and barrel, target investments and whatever else in India. Use economics and finance as a tool to tackle the Hans’ malevolence-cum-perfidy. War will destroy whatever wealth India does possess now.
Politically, too, it will create huge turbulence.

The month-long 1962 war destroyed Jawaharlal Nehru. One hopes 2020 will not see a repeat. The 1962 war triggered an emergency over the external threat, followed by a draconian Gold Control Act. The 22-day conflict paved the way to demonetisation on June 6, 1966, followed by all-round economic dislocation.

The 17-day 1971 war led to another economic recession, and then the 1975 Emergency which almost derailed Indian democracy.

India must therefore take the economics route to curb, deport, expel and de-couple from China. Not through bloodshed. The latter will inflict a massive body blow to India’s defences, economics and democracy.

Draconian laws are bound to follow due to the all-round external threat and internal dissent, and a destruction of India’s polity, society and economy.

India needs to act fast. In October 1962 Nehru wrongly asked an ill-prepared military to throw China out of its territory. Don’t do it today.

Instead, first throw all non-military Chinese out of India’s trade, telecoms, transport and tourism…  and every other sector immediately.