The 3,750-km “Bharat Jodo Yatra” is taking place at a time when many predict the further decline and demise of the Grand Old Party. 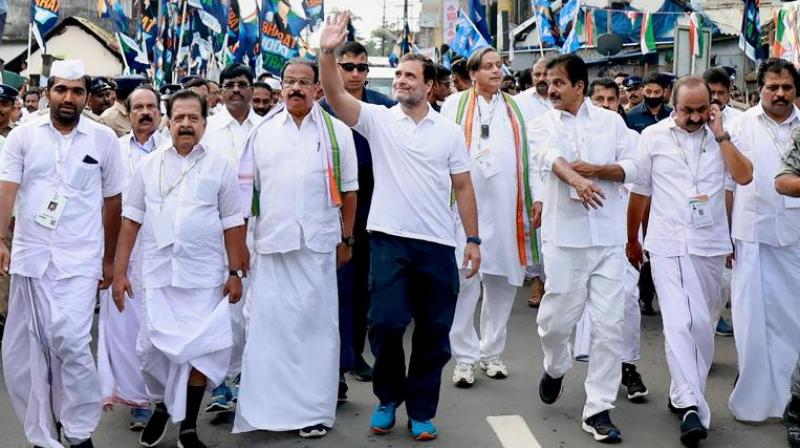 Road transport and highways minister Nitin Gadkari, who is not exactly in the good books of Prime Minister Narendra Modi, has a never-say-die spirit. His favourite quote is: “You are not defeated when you lose. You are defeated when you quit!”

It seems Rahul Gandhi too believes in Paulo Coelho’s quote that sends out the message: “keep fighting whatever the odds”. And the odds are many for the Congress and its leader.

As Mr Gandhi embarks on an ambitious nationwide yatra, the picture that’s projected is of a determined man undaunted by defeat, dejection, ridicule and rejections. The 3,750-km “Bharat Jodo Yatra”, billed as the longest padayatra ever, is taking place at a time when many predict the further decline and demise of the Grand Old Party.

If it’s really a “new beginning”, as the party claims, it will be good for the organisation. This is because consistency has never been Rahul’s virtue and therefore the 150-day yatra is an acid test for the young leader to emerge as the Opposition’s prime challenger. There are already several leaders preparing to take on Prime Minister Narendra Modi in the next polls. In this era of 24-hour politics, people want their leaders to be proactive. The laidback are laggards. The quitters are the defeated.

With debacles in two successive Lok Sabha polls since May 2014, the Congress is already down in the dumps and the only way it can now go is up. As the political clock starts ticking for the 2024 Lok Sabha polls, just 20 months away, Rahul is trying to put the house in order with the yatra.

But the attacks and barbs from the ruling BJP and its sympathisers on the exercise undertaken by the young leader signifies that they are a bit rattled within. Everyone knows Rahul is the favourite punching bag of those striving for a “Congress-mukt Bharat”.

Perhaps, no leader in post-Independent India would have been ridiculed as much as Rahul. One must have real daring and character to get going amid such slander.

This isn’t to say that Rahul’s leadership doesn’t have flaws. They are many like with any other leader. The problem is that only his flaws are magnified by a section of the media. Consistency isn’t one of his strong points, but speaking truth to power is. No other Opposition leader has dared to expose the powers that be in such a manner as he has done. “Thoda hatke, thoda bachke” is the cautious line adopted by several others, especially the leaders of regional parties, while Rahul has insisted that he is afraid of no one.

As a political commentator put it: “The government of the day is adamant in showing Rahul as intellectually inadequate, emotionally unstable and now also an alleged money-launderer.”

If one believes Rahul’s detractors that he isn’t a wise man, to put it mildly, he should have been ignored. Why is Prime Minister Narendra Modi and his loyalists constantly targeting Rahul for the past eight years? Why the sobriquet “Pappu”? Why the false concern of what will happen to the Congress under him? Why so much criticism when he goes abroad? They should have just ignored him. Let the sleeping dogs lie – that should have been their strategy.

But the strategy is different. It is aimed at demoralising the opponents so much so that they give up fighting and become the vassals of those in power and are content with the crumbs doled out to them. The narrative of a strong leader entails that others remain meek and servile no matter what it might cost the republic.

In such a time, to remain the key Opposition leader is the worst predicament. It’s a real test not only of strength, stamina and endurance alone, but also the will to fight and stand up for one’s values and convictions. These are not normal times, when those in power publicly proclaim their intention to rid the country of a key Opposition force.

The yatra should be seen in this light. It is a bold attempt to connect with people on the lines enunciated by Mahatma Gandhi. The yatra will cover 3,750 km from Kanyakumari in Tamil Nadu to Jammu and Kashmir.

It is a cardinal principle in electoral politics that any party can attract allies in elections only if it shows its presence on the ground and has a strong support base. The Congress must work on a war footing to make its organisation shipshape and expose the omissions and commissions of the ruling side.
What better way to do this than to connect with the people through a yatra? The Congress’ message must be taken to the people as attempts are being made by hook or crook to show that the BJP, that has emerged as the world’s largest political party, is the only one gaining ground through its ideology and the rest will be falling by the wayside sooner rather than later.

Rahul’s refrain, while making his mark as a “leader with a difference”, is the belief that “hatred, anger and violence will destroy us. The politics of polarisation is dangerous”. History has shown that sometimes one man with courage can be the majority.

The Congress has suffered several reverses, including in many states, but at the same time it’s also a fact that it’s the only pan-India party in the Opposition that can take on the BJP.  It has been seen time and again that the regional parties have their limitations.

Mahatma Gandhi had once said: “All compromise is based on give and take, but there can be no give and take on the fundamentals. Any compromise on the fundamentals is a surrender, for it is all give and no take.”
Rahul has taken the cue. The path of the Mahatma is a difficult one. But Gandhiji had shown how he could change the narrative through his Dandi March, through which he had taken on the mighty British Empire. It had taken place in 1930, almost a century ago.

It has to be seen whether the yatra led by Rahul Gandhi can be a game-changer. The exercise is equally aimed at breaking the inertia within the party, overcoming the internal wranglings and turning the organisation into a united force. How far he will succeed will depend upon how hard he tries. Those who had come to power eight years ago promising “achhe din” are yet to deliver and a churn has already begun. Rahul has to show whether his long march becomes a turning point in Indian politics.