The price of a journalist’s criticism in Saudi Arabia

Sadly, there is every reason to suspect that the allegations are not unfounded, notwithstanding Saudi Arabia’s vociferous denials. 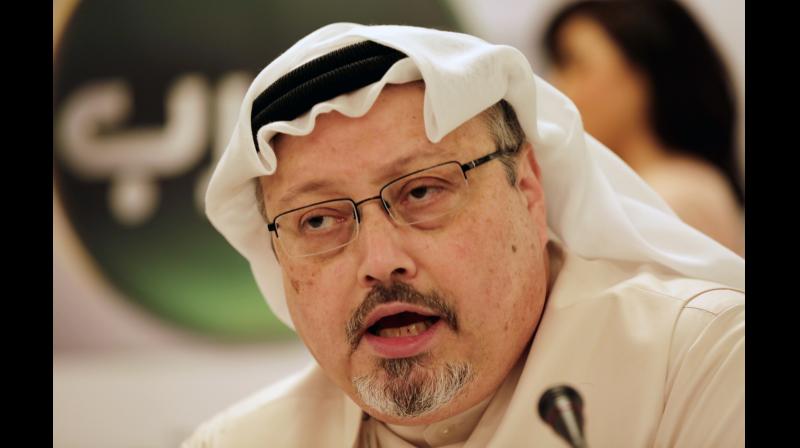 The Turkish authorities are focusing on a black van that left the premises as part of a convoy about two hours after Khashoggi entered the consulate. (Photo: AP)

Statements issued by Turkish officials during the past week point to a breathtakingly audacious crime. Sadly, there is every reason to suspect that the allegations are not unfounded, notwithstanding Saudi Arabia’s vociferous denials.

Eight days ago, self-exiled Saudi journalist Jamal Khashoggi walked into his nation’s consulate in Istanbul, in order to complete some paperwork finalising his divorce.

He hasn’t been seen since. An investigation is ongoing, but Turkish sources have indicated he was first tortured and then butchered by a 15-man hit squad that had flown in from Saudi Arabia on private flights that very day.

The Turkish authorities are focusing on a black van that left the premises as part of a convoy about two hours after Khashoggi entered the consulate. There are indications that boxes were loaded on to the van. Yes, boxes, not a coffin.

On details apparently conveyed by informants within the consulate, seemingly authoritative Turkish officials believe that after the journalist was murdered his body was sliced up and transported out of Turkey.

President Recep Tayyip Erdogan, who has built up a reputation for being ruthless with Turkish dissidents, has demanded proof from the Saudis of their claim that Khashoggi left the consulate not long after he entered it. After all, there’s no dearth of security cameras both inside and outside the consulate. The Saudis have offered the lame claim that on October 2 the cameras were not recording what they observed. Coincidence?

The bigger question is why the Saudi regime would wish to eliminate Khashoggi?

He was a consistent critic, sure, but he was hardly preaching revolution. For much of his career, Khashoggi had in fact been fairly close to his nation’s ruling family. He served as an adviser to former head of Saudi intelligence Prince Turki bin Faisal during the latter’s stints as ambassador to London and Washington. Foreign journalists visiting Riyadh relied on him as a source of insights on what the al-Saud clan was thinking.

As a young reporter, Khashoggi was embedded for a while with Osama bin Laden during the latter’s initial foray into Afghanistan. He subsequently objected to Saudi intransigence over the Muslim Brotherhood, not least in the context of Egypt, where Riyadh eagerly contributed to the coup against Mohamed Morsi. More broadly, he also pushed back against the conservative clergy within Saudi Arabia.

Khashoggi paid a price for his mild dissidence. The penalty invariably involved losing his job — as editor of Al Watan newspaper, for instance, or as head of a Bahrain-based, Saudi-owned television channel, that went off the air as soon as it aired an interview with a Bahraini dissident. No risk emerged, though, to his life or liberty.

Read: “This has not been business as usual in my country”: excerpts from Khashoggi’s writings.

Things changed, though, with the ascendancy of Mohammed bin Salman (MBS), first as deputy crown prince and defence minister, and subsequently as a crown prince who effectively rules the roost, and thrives on a direct line to both the White House and the Likud hierarchy in Israel. Khashoggi was not by any means averse to MBS’ reformist Vision 2030, or even the war in Yemen to start with.

He appears to have cottoned on early, though, to the fact that there was an absolutist mindset behind the ostensibly progressive agenda. Once his friends, among them many reformists, began ending up in prison, Khashoggi decided it would be safer for him to live abroad for a while — even at the cost of divorce from his wife and estrangement from his children (some of whom have lately been persuaded to parrot the official Saudi line on their father’s disappearance).

It was a wise move, but evidently not good enough. Khashoggi, over the years, inclined more and more towards secularism and democratisation, albeit without advocating the overthrow of the monarchy. In his regular columns for the Washington Post, he was frequently scathing about MBS’ repressive tendencies, as well as the war in Yemen and growing Saudi/ UAE affinity towards Benjamin Netanyahu’s Israel and Donald Trump’s US. He confided to friends that he was worried about his safety, but there were mixed signals, including, apparently, an invitation from MBS to return to Riyadh as an adviser.

Khashoggi turned it down. When he visited the consulate in Istanbul the week before his disappearance, the staff were very exceptionally courteous and friendly. That’s what he told concerned friends in London while attending a conference on the Middle East in the interim. But he seemed less certain about his prospects when he headed into the consulate a second time. His Turkish fiancée, Hatice Cengiz, who was left to wait outside the facility, was given a number to call if he didn’t re-emerge.

Four hours later, after giving up hope, she did. By then it was far too late.

What is the likelihood that MBS’ Western friends will now recognise the true essence of his regime? Not much higher, one would reckon, than Jamal Khashoggi turning up unscathed.