Karan Thapar | How Nehru had gutted the Constitution in 1951 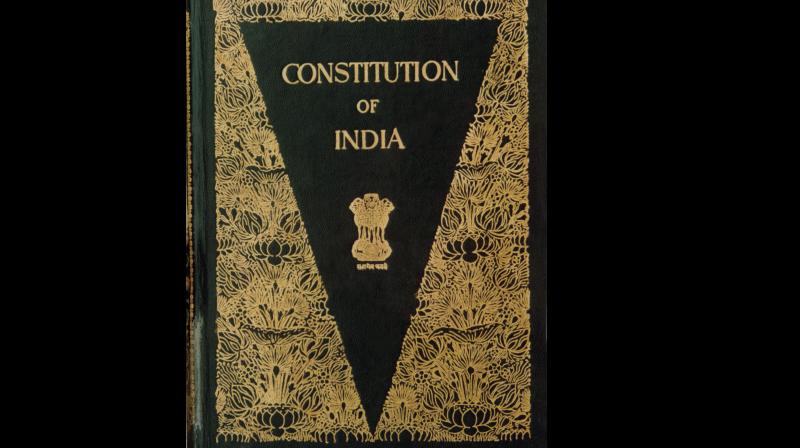 Cover page of the Calligraphic copy of the Constitution of India in English released on the Golden Jubilee Celebration of Republic of India in Central Hall of Parliament House on January 27, 2000 (Photo credit: Department of Justice, Governemnt of India)

I’m part of a generation that grew up thinking of Jawaharlal Nehru as the architect of our democracy and the guardian of our Constitution. For many this was beyond questioning. However, a book published earlier this year reveals a very different side of the first Prime Minister. It argues that the first amendment to the Constitution, that he got passed in 1951, gutted the original. So sweeping were the changes that constitutional scholar Upendra Baxi calls the post-amendment document “the second Constitution”. He doesn’t believe that it bears credible resemblance to the original.

In his book Sixteen Stormy Days, Cambridge scholar Tripurdaman Singh identifies several fundamental rights which the first amendment adversely affected. I shall only focus on two.

The first is freedom of speech, perhaps the most important of all rights in a democracy. Nehru’s 1951 amendment added new grounds on which this could be curbed. In addition to the existing grounds of libel, slander, defamation, contempt of court and anything that undermines the security of the state or tends to overthrow it, Nehru added relations with foreign states, public order and, most important, the interests of the security of the state.

Now, Tripurdaman Singh argues, this amendment created the grounds to validate sedition. This is because “the interests of the security of the state” can be variously interpreted and, thus, permits a wide range of speech to be classified under it. And this gave the state enormous powers. Admittedly Nehru did not misuse them, but his successors certainly did. Thus the first amendment “opened the floodgates for drastic and oppressive laws” like the National Security Act, the Maintenance of Internal Security Act and the Unlawful Activities Prevention Act, all of which have been used to ban books, arrest journalists, jail activists and harass political opponents.

The second fundamental right that Nehru’s 1951 amendments made redundant was the right to property. Because the courts placed obstacles in the way of his attempts to acquire zamindari lands -- in the case of Bihar requiring unaffordable compensation -- Nehru amended the Constitution to ensure that such compensation need not be paid. Consequently, the right to property may have continued in theory but in practice, because compensation was not necessary when lands were forcibly acquired, it ceased to be a fundamental right.

Let me mention one other element of Nehru’s first amendment which seriously damaged the original Constitution. This is the insertion of the Ninth Schedule. Here, Tripurdaman Singh writes, “laws could be placed to make them immune to judicial challenge even if they violated fundamental rights”. In other words, the Constitution now provided protection for unconstitutional laws. Frankly, this is nothing short of a constitutional monstrosity and, arguably, the worst of the amendments pushed through in 1951.

Now, if the content of the amendments was troubling, the impact they had on Indian politics was no less disturbing. For a start, Nehru established the precedent of amending the Constitution to overcome adverse judicial pronouncements. His successors and his daughter, in particular, made this almost a regular practice. Today, when governments don’t like what the Supreme Court has said, they blithely change the Constitution to overturn its verdict.

Tripurdaman Singh identifies two other equally important points. First, “the very concept of the judiciary and the Constitution as checks on the government” was undermined. Instead, a tradition of using executive power to subdue the judiciary began. Second, the 1951 amendments undermined the constitutional position of the individual qua class, caste, community and State. Since the original document had placed the individual at its heart, this changed not just its focus but, more critically, its character.

So why did Nehru do all of this? The answer is simple but hardly a valid justification. He felt the original Constitution was blocking his policies and reforms. As Tripurdaman Singh writes: “Zamindars, businessmen, editors and concerned individuals had repeatedly taken the Central and state governments to court … (and) the courts had come down heavily on the side of the citizens and struck mighty blows against the government”. So, to rein in the courts, Nehru amended the Constitution from which they got their powers. In the process, he gutted it. Nehru thus became the first Prime Minister to damage the Constitution.

However, Tripurdaman Singh’s book goes one critical step further. It not only exposes what Nehru did to the Constitution, equally importantly it shines a cruel light on how he did it.

In June 1951, when the first amendment was passed, the Constitution was barely 16 months old. Yet in that brief period Nehru decided it was an impediment to his government’s policies. This doesn’t speak highly of his commitment to the Constitution. In fact, as Tripurdaman Singh says, Nehru argued that his government, with its huge majority, represented “the will of the people” and thus took precedence over the principles of and the rights enshrined in the Constitution. Consequently, Nehru had no qualms using a provisional and largely unelected Parliament to amend the Constitution.

But it was worse than that. The Constitution stipulates that amendments require a two-thirds vote in both Houses of Parliament. However, the provisional parliament was a unicameral institution. In 1951, the Rajya Sabha did not exist. So Nehru misused the Constitution (Removal of Difficulties) Order to get around this. It wasn’t intended for this purpose, but that did not deter him.

This is a technical and complicated point and I deliberately won’t go into detail. However, what Nehru did is uncannily similar to what Narendra Modi did in 2019 when he changed the constitutional character of Jammu and Kashmir. Just as Nehru misused Article 392, from which the Constitution order gets its authority, to change the amendment procedure, so too Narendra Modi misused Article 370 to amend critical definitions thus enabling him to de-operationalise the article. Both were guilty of a sleight of hand.

The only thing I can add to salvage Nehru’s image is that B.R. Ambedkar, whom we consider the Father of our Constitution, was a member of Nehru’s Cabinet when the first amendment was approved and did not protest. Even Sardar Patel, who died six months earlier and may have had reservations about the impact on the right to property, would have supported the new curbs on freedom of speech. In fact, as Tripurdaman Singh points out, he considered free speech “exaggerated exuberance”.

This raises the question: how committed to protecting our freedoms were the men who fought for our Independence? The answer will have to wait for another day.