In many countries, the unfolding tragedy of the Covid-19 pandemic has been accompanied by intense polarisation 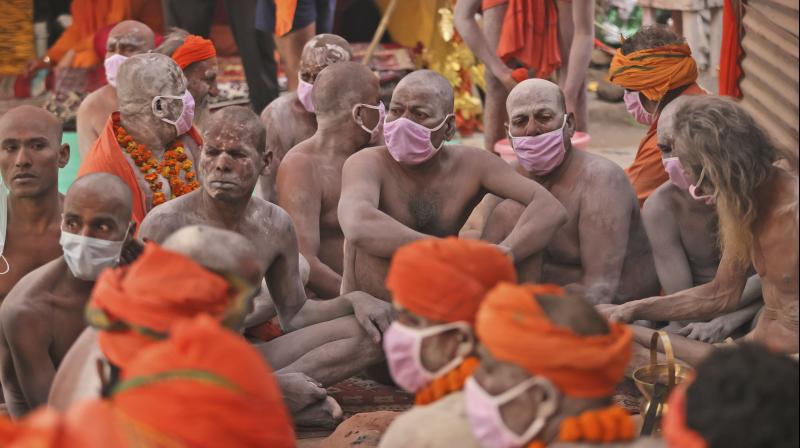 Recently, there was a conclave of so-called sadhus in Haridwar, Uttarakhand, which gave a call for killing and wiping out Muslims. (Representational Image/ AP)

The New Normal. The three words we have heard incessantly in the past two years are now a label to describe the unsettling feeling of vulnerability in a pandemic-ravaged world buffeted by social turbulence and uncertainties.

In many countries, the unfolding tragedy of the Covid-19 pandemic has been accompanied by intense polarisation, exposing fault lines in society and deepening of pre-existing cleavages.

“Social cohesion erosion”, “livelihood crises” and “mental health deterioration” are three of the five risks seen as the most concerning threats to the world in the next two years, says the World Economic Forum (WEF) in its Global Risks Report for 2022, released this week.

“This societal scarring compounds the challenges of national policy-making, limiting the political capital, focus from leaders, and public support needed to strengthen international cooperation on global challenges. The health of the planet… remains a constant concern,” says the WEF.

Arguably, many things are beyond our control. But is it time to pause, and think about what we accept, and therefore normalise by using “the new normal” as a label? What if more and more of us do not passively accept everything that is labelled as the “new normal” and start intervening in the norm-setting even in these uncertain and unsettling times?

Take the narrative of hatred and toxicity in this country. Even in the time of Omicron, the highly transmissible new Covid-19 “variant of concern”, this narrative continues unabated.

Last year, an app called “Sulli Deals” popped up; in recent days, there has been another called “Bulli Bai”. Both “put on auction” prominent Muslim women who speak out against hatred. They are a brazen attempt to humiliate these women. There was also a parallel attempt to mislead. Some persons involved in the promotion of the “Bulli Bai” app used Sikh-sounding names on Twitter.

Recently, there was a conclave of so-called sadhus in Haridwar, Uttarakhand, which gave a call for killing and wiping out Muslims. One chilling excerpt from a hate speech delivered at Haridwar: “If you want to finish them off, then kill them… We need 100 soldiers who can kill 20 lakh of them (meaning Muslims) to win this….”

Some of those involved in the apps have been arrested. Investigations into the Haridwar hate speeches are on. A few members of the Sangh Parivar have described the app disseminators and some of the sadhus as “fringe”.  But there has been no real condemnation from the top political leadership of the ruling BJP. Clearly, only the naïve would attribute deliberate attempts to target minority communities with increasing and monotonous regularity as the handiwork of a “fringe”.

All this comes on top of the hate brigade’s systematic “othering” of cuisine, culture, religious practices of communities and people that do not fit in with their idea of a Hindu Rashtra. These are just a few recent telling markers of the spreading toxicity as India gears up for Assembly elections in five states, including the politically critical Uttar Pradesh.

There are many more examples of hate speech. That they are made so brazenly, and with such frequency, reflects the state of India’s political landscape.
Even in the time of a pandemic, many of us have started describing this as the “new normal” in a passive tone of resignation.

But just as the “normal” of today is not necessarily the “normal” of yesterday, what is considered “normal”, and taken as a given with exultation or trepidation in one part of the country is not the normal in other parts.

Stepping away from politically-charged New Delhi can be revealing. A recent trip to Darjeeling was energising despite its many problems — acute water scarcity and mad traffic, to name just two. But it was refreshing to find that no one cares what animal you ate or did not eat and the talking points were completely different from what majoritarians would like you to believe are uppermost in people’s minds. In Darjeeling’s famous Mahakal temple, Hindus, Buddhists and animists worship together. And in an eatery on the city’s outskirts, I saw shrines which had the Om, sacred spiritual symbol to Hindus, alongside statues of the Buddha.

Our taxi driver played tracks from Deep Purple, widely viewed as the pioneers of heavy metal and modern hard rock, and hummed along. When I asked him whether any political party had tried to foist its dietary preference on the people in and around Darjeeling, he laughed out loud. “No one would dare. We eat whatever we wish to and we don’t care what others eat.”

It made one think. That continues to be the norm in large swathes of India despite what the majoritarians say.

Polarisation and the pandemic are not good for the economy. India’s unemployment rate shot up to nearly eight per cent in December, according to the Centre for Monitoring the Indian Economy (CMIE), an independent think tank. It was more than seven per cent in 2020 and for most of 2021. Those hardest hit by this are informal workers, the majority of the country’s workforce. Not only are people laid off, they are often not paid their actual wages. We have heard heartrending stories about this in the past two years but little has changed.

Last week, on a walk around my neighbourhood in Delhi, I overheard two house helps expressing great fear about salary deductions during the weekend curfews and partial lockdowns. The Covid-19 virus, especially in its latest hyper-transmissible Omicron avatar, continues to rage, but the restrictions aimed at containing it have also led to increasingly predatory practices in the world of work in a country already riven by stark inequalities.

The bottom line — the pandemic has indeed upended our ideas of “normal”. But we can begin to assert ourselves whenever possible and say: “No. We will not allow this to be the new normal.” There are people who don’t accept that hate must be part of the new normal and are pushing back. Ditto with exploitative work practices.

It starts with defining what one is willing to adjust to, and what one will not passively accept as the “new normal”. We can choose our “normal”. Happy New Year!