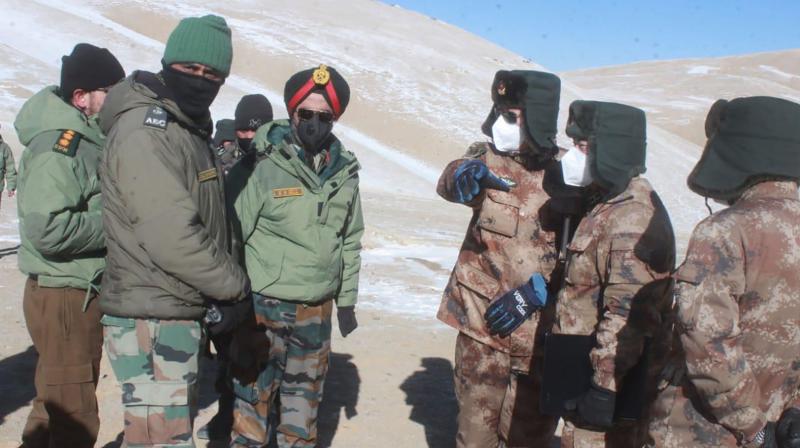 Why has China accepted a mutual disengagement? There is speculation that its strategic objectives having been met, it was willing to disengage; but this many not entirely be true. (Photo: AP)

After nine rounds of talks at the military theatre level which appeared to be tapering off without any results, we find a positive development announced by the Raksha Mantri in Parliament on Thursday: a decision to disengage between the Indian Army and China’s People’s Liberation Army in the over nine-month-long standoff in eastern Ladakh. The issues worth examining are the triggers which created a positive sentiment, the modalities involved in the disengagement and the strategic dynamics for the future.

Why has China accepted a mutual disengagement? There is speculation that its strategic objectives having been met, it was willing to disengage; but this many not entirely be true. The objectives have been analysed to a great extent. My belief veers on the coercion theory; that India’s soaring strategic confidence through the past five years deeply worried China. The feasibility of India actually becoming a part of military equations and alliances and thus upsetting the strategic balance in Asia was not too appealing for China.

India’s talk about regaining all territories of J&K was perceived as becoming a national obsession, emboldening beyond acceptable limits. Limited military coercion to force India back to the starting line was felt necessary. However, China was surprised by India’s pushback and deep sense of resolve to stick it out. A border conflict or even general war was not the intent as it was unwinnable for China without a major redeployment. It couldn’t afford creation of near-permanent voids elsewhere. A continuing standoff gave no real advantage to China except the projection of threat of a two-front war for India, which too sounded hollow given Pakistan’s precarious internal economic, political and social health.

With the world slowly recovering from the Covid-19 pandemic, shaking into a reset and a potential new order emerging, China cannot miss the opportunity to draw favourably from it. Remaining in confrontation mode with committed troops paid no real dividends. By agreeing to disengage it is attempting to project a sense of reason and political maturity; in reality it is an exit that is giving it face. No one should expect that the agreement to disengage will be achieved overnight or that conflict resolution is on the cards. There are likely to be many revisits, especially because India just cannot trust China to implement what it has agreed upon.

The Indian government invested in a new strategy of trusting its military leadership to undertake negotiations which were really in the political-diplomatic-military domain. In nine rounds, the military stood its ground well, reflecting an intellectual and pragmatic approach. Of course, it runs the risk of coming up against obstacles in implementation. The last time it tried implementing what was agreed upon in theatre level border meetings, it led to the Galwan incident. The Indian Army is not one which will simply move back to implement an agreement with a country with whom there is virtually zero trust. It will verify and verify, just like its officers and soldiers did in June 2020, which led to Galwan. With caution and the lessons learnt, that procedure has to be implemented all over again.

It is unlikely we have seen anything close to a final agreement. I do perceive it is incomplete at present as it primarily relates only to the northern and southern banks of Pangong Tso. While the actions in north Pangong Tso have been spelt out more specifically, the same is absent in relation to the south. The details of this will need to be probably thrashed out when the stage for the pullback of forward-deployed infantry comes up. Limits have been put on patrolling north of the lake to avoid physical contact between the troops of both sides. The theatre-level military-diplomatic talks will at some stage have to come down to border meetings at lower levels to restore trust and confidence.

What India should be insisting upon is the physical delineation of the LAC without prejudice to anything permanent. It will get rid of the one issue which is the bane of the LAC’s management: that is, the perception about where ours or the Chinese claim line exists. This is unlikely, of course, but must remain the pressure point on the Chinese side as a terminal objective of the current talks, the tenth round of which is likely to come up soon. The Raksha Mantri in his Rajya Sabha statement laid it out clearly: “The House should also know that there are still some outstanding issues with regard to deployment and patrolling at some other points along the LAC in eastern Ladakh. These will be the focus of further discussions with the Chinese side”. The reference was to other areas in contention, especially Depsang, where a much greater threat exists to our defences, as also an opportunity for us to threaten the main Chinese highway to Xinjiang. Without an operational-tactical advantage, if this is vacated at the Kailash heights, it is difficult to foresee any further concessions by the Chinese. Perhaps there is more to it and will emerge in due course as understandably full transparency on military operational issues is not currently possible.

Progress on the agreement and subsequent moves towards more positive signs is not contingent upon only the events in eastern Ladakh. Everything here is linked to geopolitical issues relating to Chinese and Indian interests elsewhere in South Asia; relations with countries such as Bangladesh and Sri Lanka being an example. It would be helpful if India can detach the developments in eastern Ladakh from the dynamics of Sino-Indian relations elsewhere. India will find itself under increasing pressure from China regarding its strategic equations with the Quad nations. Having come thus far and also having received fair importance from the United States in its perception of India’s role in the Indo Pacific region, New Delhi may feel it’s in a dilemma. However, its interests clearly lie where it has established greater trust and identified commonality of interests. It cannot afford to be seen to be submitting unreasonably to Chinese demands.  The inevitability in India’s approach towards the emerging situation should be to waste little time in enhancing its conventional military capability through the self-reliance route towards modernisation. As far as its northern borders are concerned, all disengagements and de-escalation will always be a temporary phenomenon. While remaining positive in its stance, India will always need to carry a big stick, as big or bigger than all its adversaries.