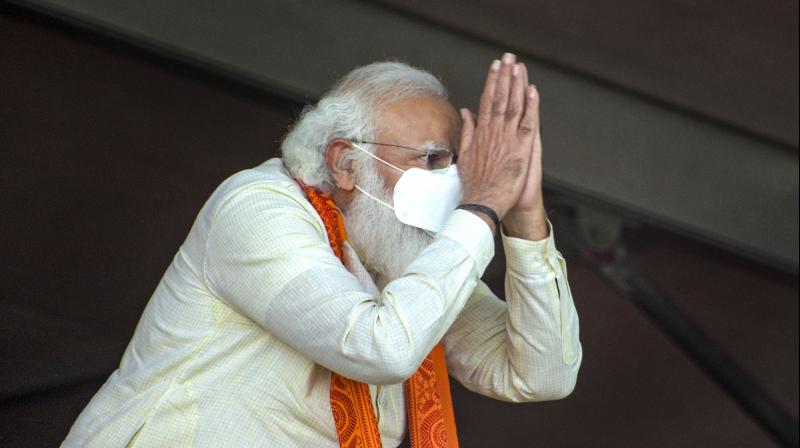 Is it realistic that the BJP will get 60 per cent of the 70 per cent Hindu votes in West Bengal? It would appear, as yet, difficult. (Photo: PTI)

An eight-phase Assembly election, even for West Bengal where violence is intrinsic to the process and every government has been accused of rigging the outcome, seemed excessive when the Election Commission announced the dates. On second thoughts, it is just what the BJP needed to build up a wave in its favour, however hard that may be.

After four phases and 135 constituencies that have already made their choices, Prime Minister Narendra Modi, home minister Amit Shah and BJP president J.P. Nadda are still hard at it, because another four phases and 159 constituencies have yet to decide. The BJP’s top brass is doing some heavy lifting with Mr Modi in the lead to get that wave going. The process seems as fraught and dependent on a force of nature, meaning the wave, as were the tense days before the mega container ship blocking the Suez Canal, Ever Given, finally budged. The difference is the wave was not the only push that the container needed; there were dredgers and tugs pulling at the hulk to get it to move.

The staggered polling dates give the BJP the time it needs to campaign for its conquest of West Bengal. If it needs so much time to campaign when the elections are underway to build voter support, the question that must be asked is, what was the party doing between 2019 when it zoomed to winning 18 Lok Sabha seats and 40.64 per cent of the votes from a mere 10.16 per cent votes in 2016? One conclusion would be that as the West Bengal election grew closer, the BJP realised it needed time to deploy its mightiest weapon, Mr Modi, in multiple locations to drum up the support and swing undecided voters to the saffron side.

The need for a saturation campaign by Mr Modi is one way of acknowledging that Mamata Banerjee is a far stronger opponent than the BJP anticipated. It also means that the Trinamul Congress is not on its deathbed as a party and organisation, despite 30-odd recent defections, including the BJP’s star acquisition Suvendu Adhikari, who seems to have dropped out of sight after the Nandigram voting.

A list of what makes the TMC and Ms Banerjee a far tougher challenge for the challenger, meaning BJP, is perhaps necessary to assess why the party is deploying Mr Modi in key constituencies to drum up the momentum it needs to get to the point where it can unseat the incumbent. In other words, the BJP has not as yet reached the tipping point.

Quite apart from usual comparisons, Ms Banerjee’s popularity vis-a-vis Mr Modi’s popularity, anti-incumbency at the state level, the attraction of the BJP as a new untested party in West Bengal, what will matter most is which party is best at holding the middle ground, meaning which party is most appealing to the median voter, the average woman/man in rural, urban and peri-urban West Bengal.

The BJP has shifted so far to the right, especially in terms of its Hindutva politics, and economic and divisive social engineering policies, that it is entirely dependent on the Hindu majority to give it the percentage of votes it needs to win an election, especially in West Bengal. It boils down to being confident of getting at least 60 per cent of the total 70 per cent Hindu votes in the state, given that the overwhelming majority of 27 per cent Muslim voters are unlikely to choose the lotus symbol on EVM machines. Its leaders are quite candid that the party has no expectations of attracting Muslim votes; state party chief Dilip Ghosh, as well as Amit Shah, are on record about this.

Is it realistic that the BJP will get 60 per cent of the 70 per cent Hindu votes in West Bengal? It would appear, as yet, difficult. Bengalis are split between conservatives, who uphold religious and social orthodoxy, and Bengalis who reject it and embrace socially progressive values. Till this election is over, there is no knowing how the Bengali voter will react to state-sponsored religious orthodoxy that is divisive in its intent and destabilising of the uneasy equilibrium between the Hindu and Muslim communities.

The Trinamul Congress, with over 43 per cent votes in 2019, obviously enjoys the support of a substantial section of Hindu voters. It is only if significant numbers of these voters shift away from Ms Banerjee that the BJP can muster the numbers it needs to oust India’s only woman chief minister.

While the BJP campaign has focused almost exclusively on the evils of the Mamata Banerjee government, focusing on polarising the vote on religious identity lines by putting Muslim appeasement at the cost of the Hindu majority at the top of the list, it has ignored the quieter revival of the Left, led by the CPI(M), and the Samyukta Morcha as a new political combination that was created for this election. The Samyukta Morcha is contesting in all 294 seats; the Left is contesting in 177 seats, the Congress in 91 and the Indian Secular Front in 26 seats. The Left is fighting for its very survival, and in this election it is working to achieve a revival. Its pitch as the alternative is politically necessary but unrealistic. Any increase in the Left and Congress voteshare will take off votes that the BJP has been counting on to reach the tipping point. This can be offset if the Trinamul Congress loses its voters and loses the elections.

Whichever party makes it across the finishing line needs to occupy the middle ground in West Bengal in social and religious identity terms.

The BJP’s promise to deliver better development and integrate West Bengal with the mainstream, which it believes it controls, comes with a promise to polarise the state on communal lines. Will that appeal to the run of the mill Bengali, who as poet Shakti Chattopadhyay famously said, are into religion and into giraffes?