Pranab as PM? Ex-Prez is a stranded politician

The RSS-BJP cannot dictate who should be the Prime Minister of a formation to be supported by the BJP to keep the Congress out. 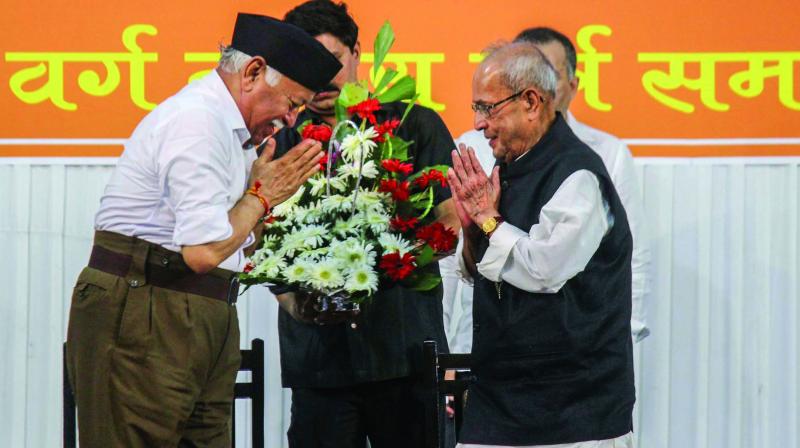 Former President Pranab Mukherjee is welcomed by RSS chief Mohan Bhagwat at the closing ceremony of “Tritiya Varsha Sangh Shiksha Varg”, an RSS event to mark the conclusion of a three-year training camp for swayamsevaks in Nagpur. (Photo: PTI)

The accusation that former President and former Congressman Pranab Mukherjee has become a Hindutva convert because he addressed the passing-out convention of the Rashtriya Swayamsevak Sangh (RSS) volunteers does not hold water.

Mr Mukherjee was never an ideology-bound politician. It would also be unfair to accuse him of being a wily opportunist and nothing more. He has a sense of the nation and he understands the high calling of politics as public service. But he has always practised politics as the need and opportunity required.

For a party like the Congress, which professed socialism and secularism ad nauseam, Mr Mukherjee was neither an ardent socialist nor a fervid secularist. Ideology is the trapping of naïve and credulous politicians, and not seasoned ones. But he had made himself indispensable to the party. He became a key leader in the Congress Party when there were not enough shrewd people in the organisation and he managed things in the party as well as in the Congress-led United Progressive Alliance (UPA) in 2004-09 and 2009-12. There were of course some fumbles and blunders on the way, including the unseemly political scuffle with the then home minister P. Chidambaram.

The feverish speculation that he is plotting to become the Prime Minister in 2019 at the head of a non-BJP and non-Congress “federal front” has filled the air. But there is a need to give a plausible twist to the rumour mill of Mr Mukherjee’s indefatigable Machiavellian gambit. The argument that he went to the RSS headquarters in Nagpur to woo the Hindutva outfit’s top brass has too many loose ends to it. First, it presumes that the BJP is not getting a majority in the Lok Sabha election of next summer, and therefore the RSS would agree to a political formation headed by Mr Mukherjee and which could even be supported by the diminished BJP. The underlying motive for this outcome is that the RSS would be quite happy to see the BJP lose the election under Prime Minister Narendra Modi and party president Amit Shah, so that it gets back the reins of control over the BJP.

It also means that there is a discernible rift between Modi-Shah duo and the RSS leadership. It is both an interesting and attractive hypothesis. But there are too many twists to it. A good hypothesis should be simple and clear.

The RSS might be anxious to regain its parental rights over the BJP but it cannot hope to do so by backing a superannuated politician like Mr Mukherjee, though it may believe that it needs a sophisticated Hindutva man like Mr Mukherjee and not the crudely muscular Hindutva politics of Mr Modi and Mr Shah. It needs to look to a younger man, and if rumour-mongers are to be believed, then Delhi chief minister and Aam Aadmi Party commandant Arvind Kejriwal is the GenNext Hindutva politician.

Mr Mukherjee’s prime ministerial aspirations might be born of the overvaulting ambition of a Macbeth, but Mr Mukherjee does not dare to be heroic at the cost of being turned into a tragic hero. He would consider the options but he would pass them by once he recognises the unfeasibility of the ploy. He would rather be the titular statesman of Indian politics than risk everything he has because if he were to be seen trying to be the Prime Minister and failing to reach his goal, then he would lose whatever stature he has acquired as a sagacious politician.

But it is quite possible that Mr Mukherjee is surveying the current Indian political scene and reckoning with the possible outcomes and thinking of ways of dealing with them even as a chess player would in his imaginary game. But it is far from being a real game.

The former President is not in the competition and it is quite unlikely that even the ragtag non-BJP, non-Congress front would ever consider giving the top job to Mr Mukherjee. So why is everyone engaged in enjoying this “khayali pulao”? There seems to be a consensus all around that the BJP under Mr Modi and Mr Shah will face a setback in 2019, and this is a possibility that even ardent admirers of Mr Modi are considering. Till 2017, the Modi brigade saw no place for India’s Opposition, much less the possibility of the Opposition edging out the BJP. The Modi advocates have raised the question — “If not Modi, who?” — and they have argued that if Mr Modi is not acceptable in his own right, then he will remain a choice because the others — read Congress president Rahul Gandhi — are worse. The Opposition parties are working out ways of coming together to defeat the BJP in 2019 because they see their very political survival at stake, but they are not considering any sage-like leader like Mr Mukherjee to lead them.

The RSS-BJP cannot dictate who should be the Prime Minister of a formation to be supported by the BJP to keep the Congress out. The non-Congress, non-BJP parties would not entertain the Pranab-as-PM proposal even if the RSS were to favour it. Mr Mukherjee burned his boats with the Congress much before he spoke at the RSS rally on June 7. He made it clear in an interview even before he was pushed into the presidency that he would not serve the Congress under Rahul Gandhi. He sees the generational absurdity of working with Rahul Gandhi after he had worked so closely with Indira Gandhi.

Mr Mukherjee did not work with Rajiv Gandhi, but he had worked with P.V. Narasimha Rao. His working relationship with Sonia Gandhi was purely functional. It did not carry the emotional overtones of the kind that he had with Indira Gandhi.

It is the end of the road for Mr Mukherjee with the Congress because he is not willing to work under a new generation Nehru-Gandhi. The “federal front” leaders too are not really enamoured of Mr Mukherjee. The former President is really a stranded politician.