Abdul Khaliq
The writer is a former civil servant and the secretary-general of the Lok Janshakti Party. The views expressed here are personal

Dalits have been assaulted for daring to ride a horse; killed for sitting cross-legged; and thrashed for wearing mojris 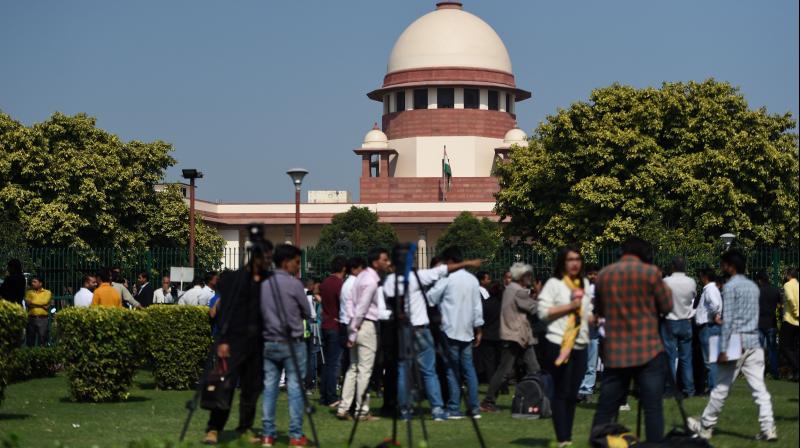 The guardians of the Constitution need to be reminded that reservation was envisaged for backward class of citizens who are stigmatised on account of their caste. PTI Photo

Reservation in Government jobs and institutions has always been a grudging concession to the weakest sections in our society.

Sadly, even as the country wrestles with the pandemic, the Supreme Court is busy in trying to whittle down the benefits bestowed by our founding fathers on a group that has suffered centuries of unmitigated oppression and human misery that persist to the present day.

Only the law has changed but not society’s shameful attitude to those at the bottom of our rigid caste-based hierarchy. Last year, a 21-year-old dalit was beaten to death for sitting on a chair and eating in the presence of upper caste men.

Dalits have been assaulted for daring to ride a horse; killed for sitting cross-legged; and thrashed for wearing mojris, which are leather shoes associated with royalty. Data released by the RBI some years ago showed that the lowest percentage increase in wages in rural areas was that of sweepers and cobblers — traditionally dalit occupations — which was even lower than that of unskilled farm labourers.

Every year there are more than 40,000 registered cases of atrocities against dalits, including murder and rape. Nobody in this country is scandalised, so routine are such happenings.

The stark reality is that our society continues to be disfigured by this pervasive oppression of the dalit. Unfortunately, in the last few years, our highest Court has ignored the ugly legacy of caste discrimination even as it has sought to pare down the reservation policy. Let me elucidate with a few recent examples.

In a body blow to dalit aspirations, the Supreme Court in 2018 quashed reservation in job promotions for Scheduled Castes/Scheduled Tribes, thereby providing judicial imprimatur to an iniquitous system where dalits occupy 45 per cent of the safai karmachari posts but constitute a mere fraction in the higher echelons of government.

In keeping with this upper caste, upper class predilection, the Supreme Court has remained quiescent regarding the government’s controversial decision in January 2019 to grant 10 per cent reservation for economically weaker sections in the general category.

A Court that has overzealously affirmed the sanctity of the 50 per cent cap on reservations whenever there were attempts to breach this lakshmanrekha for the weaker sections is now maintaining a deafening silence. Of course, as the beneficiaries in this case are not dalits, the issue of reservation hurting the meritorious would not be relevant to a Court that has hitherto repeatedly raised the phony pennant of merit to balk at reservation

In February 2020, a two-judge SC bench, contravening the spirit of the Constitution and its Preamble, ignoring the hateful, continuing discrimination against dalits, decided that reservation was not a fundamental right and that the government is not duty bound to provide reservation in matters of appointment and promotion in favour of SCs/STs.
According to the honorable judges, the power to decide on reservation rests with the government. The Central government has decided not to contest the case as it was not a party in the legal battle. From being a sacred constitutional commitment, the reservation policy is now dependent on the largesse of the political executive.

At a time when the country faces its gravest crisis ever — with death stalking the poor man's hovel but also the rich man's mansion — the Supreme Court, on April 22, passed a judgment on reservation that is clearly another stab at diluting, if not ending, affirmative action for dalits.

In a gratuitous swipe at the reservation policy, the honorable Court, while arbitrating on the legality of the Andhra Pradesh government decision on reserving 100 per cent jobs of teachers in an ST area, brought in the totally unrelated issue of the “creamy layer”, a derogatory term coined by the apex court and used only against backward classes when it should actually apply to the historically privileged who have fattened on this land.

The latest judgment is problematic for several reasons. The honorable Court makes a sweeping, unsubstantiated allegation that “the affluents [sic] and socially and economically advanced classes” among the SCs/STs “do not permit benefits to trickle down to the needy”. The Court’s panacea is to suitably modify the SC/ST lists under Articles 341(1) and 342(1) to exclude this “creamy layer” of beneficiaries. If one extends the Court’s bizarre logic, should not the “creamy layer” in the general category also be declared ineligible for government employment as they impede the opportunities available to the really needy upper castes?
Moreover, by setting aside the perfectly practical and rational Andhra Pradesh government orders reserving posts of teachers in tribal areas for scheduled tribes, this verdict contradicts the recent SC two-judge bench order bestowing complete power over reservation to the states.

Ironically, the Supreme Court had expressed a quite different view in the February 2020 SC verdict restoring the punitive clauses of the SC/ST (Prevention of Atrocities) Act, stating therein that “in spite of reservation, the fruits of development have not reached to them, by and large, they remain unequal and vulnerable section of the society [sic].”

In the context of the Supreme Court’s capricious judgments, one is reminded of Justice R.H. Jackson’s rationalisation for his inconsistency: “I see no reason why I should be consciously wrong today because I was unconsciously wrong yesterday.”

The Court is guilty of cherry-picking from the Indira Sawhney nine-judge bench verdict to suit its argument regarding periodic review of SC lists, but leaves out that judgment’s most crucial observation that “the test or requirement of social and educational backwardness cannot be applied to SCs and STs who indubitably fall within the expression ‘backward class of citizens’.”

The selective use of previous judgments as “precedent” to justify and bolster the preferred worldview of the presiding judges has become so blatant that it actually compromises justice.

The guardians of the Constitution need to be reminded that reservation was envisaged for backward class of citizens who are stigmatised on account of their caste. By ignoring the ugly, unremitting saga of untouchability and the irrational belief in dalit inferiority embedded in our culture, and instead trivialising and reducing reservation to a purely economic tool for betterment, the Supreme Court has violated the philosophy and spirit behind reservation enshrined in our Constitution.