Opinion   Columnists  12 Aug 2019  Reviving the Congress: Is Sonia up to the task?
Opinion, Columnists

Reviving the Congress: Is Sonia up to the task?

Pulled out of semi-retirement, Sonia Gandhi is faced with a challenging task ahead. 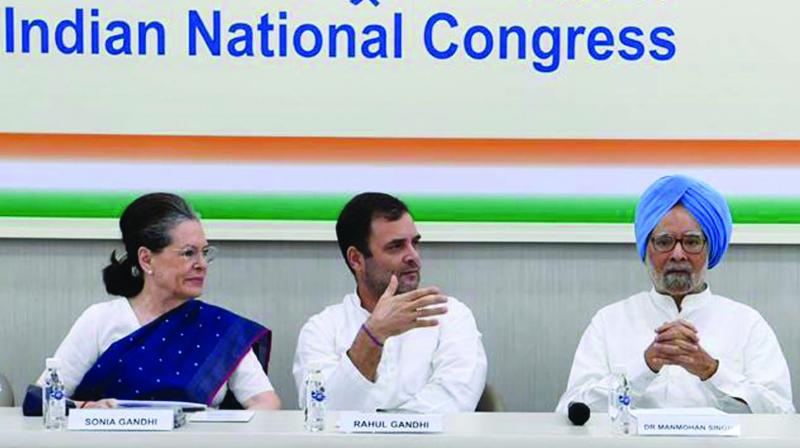 It is yesterday once more. Twenty months after she stepped down as Congress president, Sonia Gandhi has returned to take charge of the party she had led for nearly two decades. The decision to hand back the presidency to her was necessitated after the marathon meeting of the Congress Working Committee, the party’s highest decision-making body, was unable to arrive at a consensus on a candidate from outside the Nehru-Gandhi family.

When Rahul Gandhi chose to quit as Congress president in May after the party’s disastrous performance in the Lok Sabha elections, he said that a non-Gandhi should be named his successor. But Saturday’s meeting of the CWC could not bring itself to do so. It first tried to persuade Rahul Gandhi to take back his resignation but failed to budge him. Priyanka Gandhi Vadra also responded with an unequivocal “no” when she was asked to helm the party.

This day-long drama, which ended with the party prevailing upon Sonia Gandhi to lead the Congress once again, proved, if indeed proof was required, that the grand old party is unable to sever its ties with the Nehru-Gandhi family. Over the years, the Congress has become overly dependent on this dynasty, convinced that it is the glue which holds the party together. It is also a pointer to the lack of leadership in the Congress that it could not find someone from outside the family to head the party.

“The Congress is a Nehru-Gandhi party”, a senior leader had once told an ambitious colleague who had raised the banner of revolt against the party leadership. “But for how long”, he moaned, to which he was told sagely: “As long as it takes.”

Clearly, the Congress is not yet ready to take a leap forward. Today, when Rahul Gandhi himself offered the party an opportunity to pick someone from outside the family and start afresh with new leadership, the Congress steadfastly refused to do so. That Sonia Gandhi has been named “interim president” indicates that another family member — most likely Priyanka Gandhi Vadra — will take over from her mother at an appropriate time.

Pulled out of semi-retirement, Sonia Gandhi is faced with a challenging task ahead. The Congress today is a pale shadow of its old self. The grand old party has suffered two humiliating electoral defeats at the national level, and its footprint across the country is vastly diminished, its state units are riven with factionalism and there is a steady exodus of party workers on the lookout for greener pastures.

Matters were made worse after Rahul Gandhi decided to step down as Congress chief. Rudderless and leaderless for the past two months, the party lurched from one crisis to another. More importantly, the Congress faces a serious existential crisis due to its lack of ideological clarity. This is self-evident as the Congress has failed to spell out its vision or present a counter-narrative to the BJP’s majoritarian agenda. The confusion in the Congress stands out in sharp contrast to the BJP’s ideological clarity.

So, the big question is: can Sonia Gandhi stem the rot in the Congress? The party is convinced that only she has the capability to deliver. After all, the Italian-born Gandhi bahu, a novice in politics, had proved her critics wrong when she took charge of the Congress in 1998 when it was similarly leaderless and adrift. Though dismissed back then by Jyoti Basu as “a mere housewife”, Sonia Gandhi had been a quick learner. When she handed over the baton to Rahul Gandhi in 2017, she had the distinction of being the longest-serving president of the 132-year-old Congress, having pulled the party out of political wilderness and steered it to two consecutive Lok Sabha victories. The Congress had governments in only four states when she took charge of the party but over the next decade, it was in power in a dozen-odd states. It was under her leadership that the Congress discarded its “ekla chalo” policy and decided to forge alliances with “like-minded” parties. Sonia Gandhi unhesitatingly extended the hand of friendship to regional leaders, including Dravida Munnetra Kazhagam chief M. Karunanidhi and the Nationalist Congress Party’s Sharad Pawar, putting aside past differences with these leaders. Again, it fell upon her to handle fractious allies when the Congress-led government was in power from 2004 to 2014.

However, Sonia Gandhi’s record is not without blemish. Keen to prove that the Congress could lead a coalition government, she spent all her time firefighting during the 10 years the party was in power. The result was that she paid scant attention to the party organisation. She perpetuated the nomination culture in the party while the all-too-few meetings of the party’s highest decision-making body rarely saw serious political dialogue. It met only to rubberstamp the leadership’s decisions. Sonia Gandhi paid a heavy price for this oversight as the disarray in the party and the corruption charges against the Manmohan Singh government reduced the Congress to a mere 44 Lok Sabha seats in the 2014 Lok Sabha elections.

Under attack over her foreign origin when she took charge of the party, Sonia Gandhi’s first priority was to gain acceptability from the party and a critical public. In an effort to win over the trust of her party colleagues and to avoid confrontation, she allowed herself to become dependent on a small group of senior leaders. Decision-making slowed down under Mrs Gandhi’s leadership because she was hesitant to disturb the status quo. This suited party seniors, who enjoyed unbridled powers during her tenure. Sonia Gandhi’s return as party chief is a victory for the old guard, which successfully outfoxed those who were pressing for a younger leader and internal elections.

Only time will tell if Sonia Gandhi is still up to the task of reviving the party. She faces a more daunting task today as 2019 is not 1998. Today, the Congress faces a more powerful adversary in the Narendra Modi-Amit Shah duo which has converted the BJP into the country’s dominant political force and is both ruthless and focused in pursuing its goals. Besides, age is also not on her side.

When pushed to the wall in the past, Sonia Gandhi had once remarked: “They don’t know the stuff I am made of.” The Congress cadres will be waiting eagerly to see if she still has it in her to turn around the party’s fortunes.