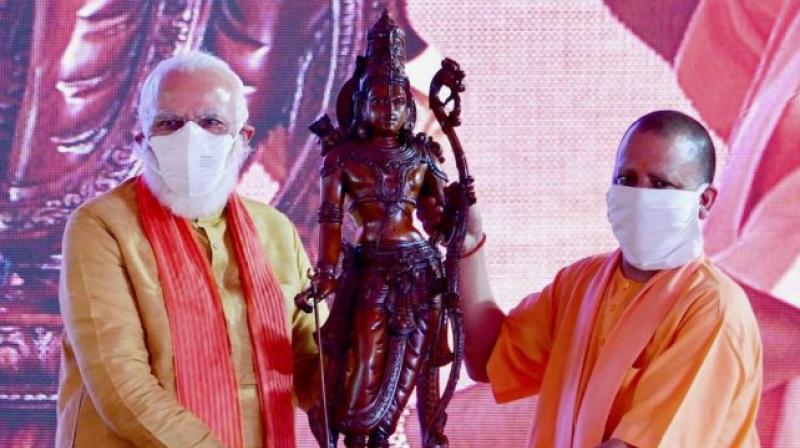 Prime Minister Narendra Modi has certainly gone overboard in making a grand show of his presence at Ayodhya.

He has proved to be a master strategist, ahead of seniors in his own political camp and, of course, his political rivals.

Clearly, he can claim to have achieved what apparently was not visualised and perhaps not even seriously considered by others. True, around a year ago, the apex court’s verdict regarding this controversial issue had set the clock ticking speedily in this direction.

Apprehension prevailed in certain quarters about the verdict and subsequent developments, including the latest ceremonies, leading to communal tension.

Thankfully, Indians at large adopted a mature and secular approach then as well as now (August 5), with there being no report about any major communal disturbance from any part of the country.

And this certainly proves that the Ayodhya-issue can no longer be viewed as a communal bomb that it once seemed to be. Against this backdrop, what can Mr Modi expect to gain by the grand “religious” show displayed at Ayodhya on August 5? Of course, constitutionally, he has as much a right to be as religious he wants to be.

After all, India is a multi-religious, secular country. Besides, most politicians do indulge in display of their religious as well as secular images for political gains. Almost all key leaders, including Mr Modi, flaunt their “secularism” by sending a token symbol to Ajmer Shareef every year.

During electoral season, substantial importance is given by most to gain media coverage of their visiting temples and so forth. Well, this is India.

Mr Modi’s Ayodhya-show cannot but be viewed as a grand step taken by him in style, to enhance his image, particularly his “religious” credentials in the eyes of Indian voters.

Considering that it has been taken at a time when a vicious virus is sending distress signals from all directions, Mr Modi is probably hopeful that this Ayodhya-move will be of some help in distracting the people’s attention. Will it? This may be viewed as a million dollar question.

The nature of comments coming from even his key political rivals suggests that they cannot afford to criticise his Ayodhya-show. This may be viewed as a political “victory” for Mr Modi.

There is nothing wrong with politicians of various parties expressing appreciation for the Ayodhya Ram temple ceremony.

Indians have come a long way from December 6, 1992, when communal violence engulfed practically the entire country following the demolition of Babri Masjid, for construction of the Ram temple.

Nevertheless, there lurks a fear in certain sections, whether the underlying motive of the ruling party and its leaders is to pay greater importance to their Hindutva-agenda than to the country’s Constitution.

It is hoped that this is not the case and substantial attention is paid not to provoke communal violence in name of religion, constitutionally.

Mr. Modi is apparently well aware that he cannot afford to openly use the communal card for political gains. It is not without reason that he donned a secular mask when he first chose to come on the national stage by contesting the 2014 parliamentary elections.

Also, each time communal frenzy targeting minorities of some nature, particularly Muslims, hits headlines, protests and demonstrations against it do not take long to surface.

A greater number of secular non-Muslims (largely Hindus) participate in these demonstrations than Muslims. This suggests that the question of his Ayodhya-show being viewed communally by people in general is as good as non-existent.

Even if this were not a Covid year, the prospects of people adding communal fervour to the Ayodhya-show would probably not have prevailed.

It is possible that Mr Modi has his eye on gaining votes in the Hindi belt with the Bihar Assembly election round the corner.

He has his right to make political use of religious shows, if he wants to, as long as communal violence and hatred are not provoked. In recent years, some noise has been made about certain leaders hoping for polarisation of vote banks along religious lines.

Perhaps, a motive of the Ayodhya-show is this. It may be, but with Hindus as well as Muslims divided into numerous groups, castes, sub-castes and also regional, the question of there being any Hindu or Muslim vote-bank is as good as non-existent.

So Mr Modi’s Ayodhya move may certainly be viewed as a master card as it has helped him gain substantially a positive image that had suffered in recent days because of crises caused by the coronavirus. He hopes to dominate headlines for some time.

It cannot be ignored that the virus has left Indians a little too tense to remain distracted by his Ayodhya show for long. Nevertheless, he has once again proved to be a master strategist who knows how to steal a march on his rivals in the political race.

He has, for the moment, all the reason to talk about his “56-inch” chest and feel proud!