As Dr Manmohan Singh, has always reiterated, the Asian ecosystem has ample space for India and China both to grow together 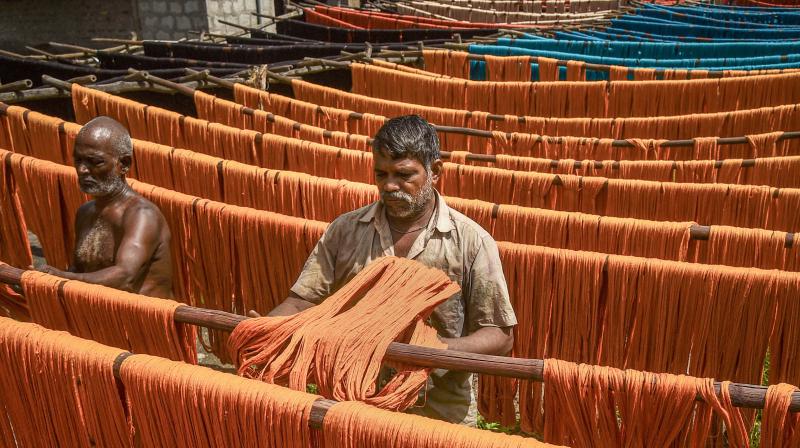 Workers hang dyed yarn for drying under the sun as seen on the National Handloom Day at a textile mill, in Guntur, Andhra Pradesh. PTI Photo

“As Australia draws closer to the US in the name of national security and pursues trade diversification, it risks alienating China, its largest trading partner by far with a crucial role in its economic recovery.”

Australia could be replaced by India in that sentence from a recent article in Hong Kong’s South China Morning Post newspaper by Yuan Jiang, a Chinese Ph.D. student at Australia’s Queensland University of Technology. In neither case is there a lucid articulation of why precisely China is feared.

Some of Prime Minister Narendra Modi’s recent actions might suggest he would like to ban all business with China but lacks the confidence to do so. Restrictions on investment from neighbouring countries -- as if Pakistan would put money into India or Nepal has any to do so -- are too thinly veiled to fool anyone.

At the same time, Modi glosses over China’s territorial incursions in Ladakh for reasons that may not be very creditable.

Some of his critics suggest that China alone welcomed him when Britain and the United States refused him visas because they disapproved of his attitude to Muslims as the chief minister of Gujarat.

As the Congress’ Ahmed Patel remarked, Modi has paid nine official visits to China whereas no other Indian Prime Minister has gone there more than twice.

Congress leader Rahul Gandhi was even more cutting, and pointing to Modi’s obsession with the gigantic statue of Sardar Vallabhbhai Patel, he added: “It will be the world’s tallest statue but it will be ‘Made in China’, like our shoes and shirts.” It was an unkind cut for two reasons.

First, like Shelley’s Ozymandias, Modi hankers to impress future generations with massive creations. Second, much to the embarrassment of all thinking Indians, the fetish has led him straight into China’s embrace.  Only China’s Jiangxi Toqine Metal Crafts Corporation, allegedly the world's largest foundry, could produce the 7,000 or so bronze plates and panels that the $430-million, 600-ft figure needed.

The dependence is evident in other more vital spheres. As China’s Global Times, a daily tabloid published under the Chinese Communist Party’s auspices, noted smugly: “India’s rapid progress in catching up with China when it comes to attracting foreign investment shows its potential to become a global economic powerhouse, but whether India will be the next China in terms of economic growth depends on many factors, and how much help and investment it gets from China may be one of the first and foremost.”

The patronising tone is easily explained: leaving aside the 1962 border war, although both countries have roughly the same population, India’s GDP is only $2.5 trillion, compared with China's $12.2 trillion.

High mobile penetration among 1.3 billion Indians owes much to Chinese Internet platforms, which know from their domestic experience how to translate demographic dividends into consumption power to attract more foreign investment.

As the former Prime Minister, Dr Manmohan Singh, has always reiterated, the Asian ecosystem has ample space for India and China both to grow together.

There are enough consumers and sources of raw material and investment capital for two burgeoning economies. There are also signs that the Indian tortoise may not be crawling too far behind the Chinese hare.

While foreign corporate launches, mergers and acquisitions in China amounted to nearly $41.6 billion last year, India did not do too badly, with $40.6 billion in foreign direct investment.

Walmart’s $16 billion stake in Flipkart meant a 64 per cent year-on-year jump. Moreover, India’s $79 billion remittances from abroad exceeded the $67 billion that the overseas Chinese sent back.

As a result, while India’s GDP grew 8.2 per cent in the second quarter, China’s economy grew 6.7 per cent.

However, one of the most important of the several factors that stand in the way of India’s robust growth is the obsession with spectacle instead of development.

Modi squanders money on architectural extravaganzas like the Ayodhya temple to Ram that is now being built, reinventing Delhi and gigantic statuary instead of investing in liveable housing, potable water and a creaky healthcare system that is incapable of coping with Covid-19.

China, meanwhile, never ceases to advertise itself as the only one among the world’s top five healthcare markets with double digit growth.

Another yardstick is that while India is inordinately proud of its nine Nobel laureates, their success is really happenstance. China’s eight prize-winners are the products of the solid primary and secondary school system that has been built up throughout the country.

Standing up to China sounds undeniably patriotic. But we must know the threat in order to repulse it. If the goal had been conquest, China would not have walked away after Bomdila in 1962.

If it was economic domination, the Chinese would not have wanted to invest in infrastructure (highways, railways, ports and airports) as well as manufacturing to reduce India’s trade deficit and Mr Modi's “Make in India” dream.

Of course, the Chinese have a strategy and the purpose is to help China, not India. But the way to counter that is not empty bombast and blowing hot and cold, but to build up India’s own economic strength, bargain hard over trade terms to increase India’s exports, and to cooperate in economic and development projects that help both countries.

Like Australia, India too cannot contain China in the South China Sea. It would only diminish itself by becoming another Tibet, Xinjiang or now Hong Kong in America’s anti-China armoury.