Shobhaa De | Are Padma awards for the ‘common’ man? Not really!

For the very first time in the history of the Padma awards, I felt elated after scrutinising the eclectic list of awardees 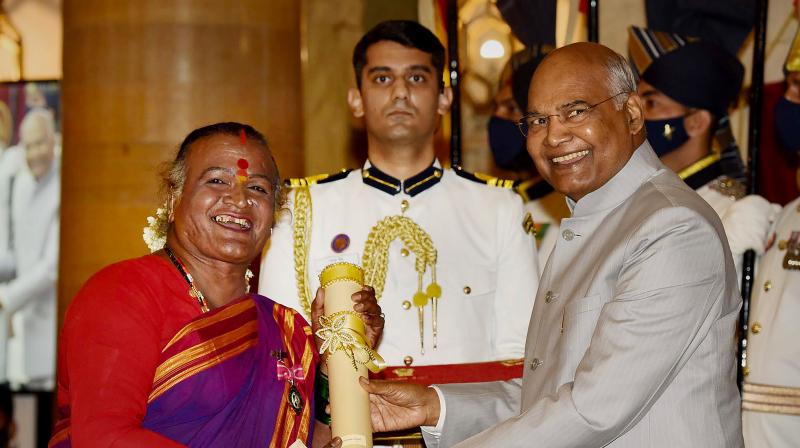 Please note: I don’t really want to rain on anyone’s parade or play party pooper, but all the recent euphoria, post-Diwali, is exhausting me somewhat. As it is, I am suffering from post-Diwali guilt -- all that Maharashtrian faraal! Those crunchy chaklis and karanjis! The oil-soaked Kolhapuri chivda and the kadak bundi laddoos! Thank God… the vendors who set up temporary stalls in predominantly Maharashtrian localities like Girgaum and Dadar disappear as soon as the festivities end and we can resume our daily, dull diets of healthy eating. But wait… why did the faraal taste different this year? Mainly because it was different. It is no longer the Girgaum faraal, painstakingly prepared by and sold by local Maharashtrian families crouching on the floor, bent over huge cast iron kadhais, with aromas of different specialties getting perfectly deep fried in unadulterated ghee, luring unwary customers passing by on the narrow strip of footpath with dangerous broken paver tiles. It was worth risking a twisted ankle to take home authentic Maharashtrian savouries and sweetmeats. Today, those small businesses and tiny shops have been muscled out by aggressive new entrants. Smart salesgirls in smelly polyester business suits, sell packaged “faraal” of a dubious quality, from airconditioned branded outlets that have “Keep Safe” and “Wear Masks” stickers all over. Sanitised living acquires a whole different context.

Just as I was digesting the indigestible, came the coverage of the latest Padma winners — and what a diverse galaxy of achievers it was! Apart from the usual suspects (Bollywood stars seen as ruling party loyalists), came the other unexpected Mumbai film industry winners — like Karan Johar. Not that he does not deserve a Padma — of course, he does! But take a look at the sweet irony of the honour! Kangana Ranuat and Karan Johar sharing their moment of glory together, putting old acrimony to bed as they presented themselves at the magnificent Durbar Hall of Rashtrapati Bhavan to receive the Padma from a beaming Ram Nath Kovind, the President of India! Let’s hope that the nepotism war ends on this red carpet. Remember, the spat had started with Kangana Ranaut accusing Karan Johar of being the “flag-bearer of nepotism” in Bollywood. A charge she had hurled at him as a guest on his own show! A charge that had caught on and spread like wildfire, which raged on and on — till well, this week! Assuming the flames have been permanently doused with Kangana congratulating Karan, and it isn’t a temporary “Padma” truce! Now… let’s wait for the announcement: Dharma Productions sign on Kangana for a mega project titled “Myself, Padma Shri Kangana Ranaut”. Unless, of course, she becomes the CM of Himachal Pradesh before that. Or is appointed to spearhead the rival “Gautam Budh Nagar Film City” in Noida.

But much beyond Bollywood awardees, it was an inspired and inspiring list of a few incredible but unsung individuals, who finally received recognition for their contribution to their various fields. In particular, it was the transgender dancer-activist Matha B. Manjamma Jogati who totally stole the show with her well-timed “performance” just before the honour was conferred on her.

She not just raised eyebrows, but hackles too, when she broke all the rules, cocked a snook at protocol, ignored official instructions, and decided to “bless” the President of India by swirling and swishing the ends of her saree pallu over the startled gentleman’s body. I liked her defiance! What is generally a robotic, stiff, boring ceremony with too many do’s and don’ts, for once, became a joyous and uninhibited public event, where an awardee stayed true to her roots and expressed gratitude with authenticity and pride!  From a person who had to beg for a living, to being feted by the nation — was it amazing, or what? That single “saree blessing” gesture set her apart from the rest — the deserving scientists, scholars, poets, tycoons and all the others. In my book, the only other equally notable “star” at the event, along with Jogati, was the humbly dressed Tulsi Gowda, a 77-year-old environmentalist who has planted over 30,000 saplings, and is often called the “encyclopedia of forests”. A member of the Halakki tribe of Karnataka, she proudly walked barefoot on the red carpet to receive her recognition.

Then there was K.Y. Venkatesh, who has “achondroplasia”, that stunts physical growth and leads to dwarfism, leaving him at just 4.2 feet, but with giant sporting achievements to boast of in volleyball, hockey, football, athletics, badminton and basketball.

For the very first time in the history of the Padma awards, I felt elated after scrutinising the eclectic list of awardees. Whosoever cleared it must be congratulated for showing originality and faith in identifying candidates worthy of the national honour. For far too many years, the Padmas have been bartered and given to people who are on the right side of the government in power. One has heard countless stories about how exactly the recommendations happened, who had lobbied, who hadn’t, who sucked up, and who stayed miles away. The politics behind the Padma awards are well known to those who track such matters, or are jealous of other people’s achievements and look for hidden agendas. This year’s list was refreshing in that it created a new inclusivity for people outside the charmed circles of influence and power.

This is the way forward, regardless of which government calls the shots in future. A Padma award is known to transform lives. Which is also why I see zero point in giving it to dead people. Honour them during their lifetime, for heaven’s sake! Posthumous awards have no value for the dearly departed — it is only the family members who gain from the dead personality’s body of work. Why delay?

I admit I was slightly surprised not to see the Covaxin team on the list. Now that the unrelenting WHO has given its approval to the vaccine’s manufacturer (Bharat Biotech), its dynamic chairman Krishna Ella has earned a place at the high table for this stupendous achievement of joining the band of elite Covid-19 pharma warriors worldwide. Union home minister Amit Shah called this year’s Padmas the “awards of the common man”. Well… Not quite! I am sure there are those on the current prestigious list who would vehemently object to being described as “common”!