More hostility should be anticipated, not just of the military kind at the border 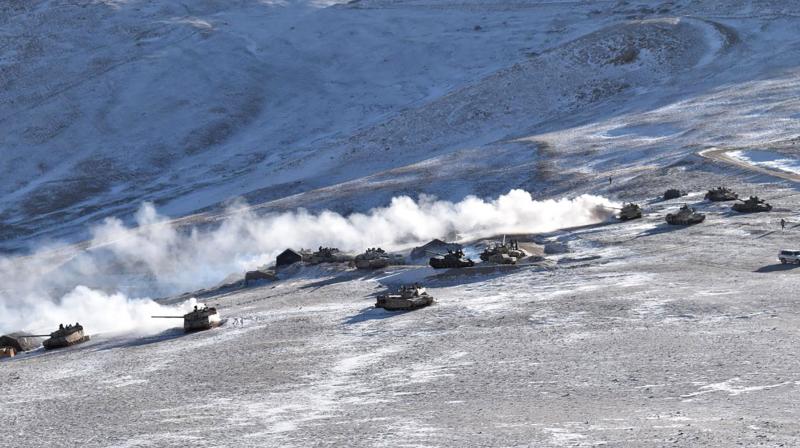 Indian Army tanks pull back from the banks of Pangong Tso lake region, in Ladakh along the India-China border on Wednesday, Feb. 10, 2021. (AP)

As the morning shows the day, the Communist Party of China’s supreme overlord Xi Jinping, ideological progeny of Mao Zedong, is determined to lead the way. What couldn’t have been music to his ears, as Covid-19-plagued 2021 drew to a close, was the London Telegraph’s commentary-prediction for 2022: “India overthrows China as Beijing counts cost of 2021 zero-Covid tolerance”. The British newspaper, while referring to China creating “all-round uncertainty with sudden, unannounced port and airport closures, thereby disrupting world supply chains”, went on to say that “China will be overthrown as the world’s fastest growing economy in 2022”.

Obviously, the prospect of playing second fiddle, even if temporarily, to India, which it sees as “way down” the world’s pecking order, was wholly unacceptable to both Mr Xi, his party and his “Communist” People’s Republic. More hostility should be anticipated, not just of the military kind at the border. Delhi needs to be fully prepared.

From the bridge across the Pangong Tso lake in Ladakh, to the Doklam tri-junction and further east to Arunachal Pradesh, the Chinese are on a building spree — of fortifications, roads, railway lines and “villages” — which will help the People’s Liberation Army dig in for the long haul all across the 3,500 km-long Line of Actual Control.

Elsewhere, the distress signals are out there for all to see as harmful developments evolve thick and fast. India’s Parliament, that symbolises the sovereignty of its people, has been criminally mocked, challenged and insulted by a low-level diplomat of the People’s Republic. The naked violation of India’s sovereignty by PRC wolf warrior “diplomats” based in New Delhi, with written threats directed at members of Parliament, is tantamount to stupid, ignorant, uncivilised intervention in India’s internal affairs. Just consider the language in this warning-cum-order-cum-threat from the Chinese counsellor’s letters to the six MPs: “I have noticed that you attended an activity held by the so-called All-Party Indian Parliamentary Forum for Tibet and interacted with some so-called members...” Is this the language of diplomacy? Has the so-called counsellor forgotten the work for which is posted in New Delhi? Was hectoring MPs part of that mission? It almost appears as if it was coming, not from a foreign envoy, but from an imperial overlord issuing instructions to representatives of a vassal state. Shades of Lord Curzon in his viceregal avatar in Lutyens’ Delhi?

A question arises. Who exactly is this Zhou Xiansheng to “notice” what is happening in a country to which he is accredited? No sovereign nation with an iota of self-respect will want to be a laughing stock in the eyes of the world, and tolerate such unacceptable conduct within its territory. It is surprising Beijing’s ambassador has not yet been summoned over this and the counsellor in question not been declared “persona non grata”.

The PRC official’s arrogance further manifests itself with a repulsive paucity of semantics: “You are a senior politician who knows China-India relations well... It is hoped that you could refrain from... and make a contribution to China-India bilateral relations”. One only wonders how Communist China and its officialdom would react if the Indian political counsellor at the embassy in Beijing were to start writing to members of the National People’s Congress — the rubber-stamp body that passes for a parliament in the PRC — every time any of its members started making absurd claims about India’s Arunachal Pradesh?

Why is the Indian diplomatic corps so supine? Do they need directions and “orders from above” to deal with the CPC’s wolf-warriors to protect the interests, honour and sovereignty of India?

What remains to be acted upon by India’s diplomats, has refreshingly been well done by some Members of Parliament. “I treat the letter with the contempt it deserves. The Chinese embassy doesn’t have any locus to write to Indian parliamentarians”, one of them said, before adding: “It is not the first time the embassy has written to me.”

One only wonders about how many Indians in various walks of life have received this kind of hectoring, threatening letters from the Chinese. Another MP, a member of the All-Party Indian Parliamentary Forum, also reacted forcefully when asked about the letter from the diplomat: “I won’t demean or diminish myself by responding to such imbecile missives. Had Chinese foreign minister Wang Yi written, perhaps I would have considered responding to it.”

These and similar missives — not just to parliamentarians but also to other prominent Indians in various fields — have become more frequent after Xi Jinping’s visit to India in September 2014. The attempt is not just to dominate India militarily — as evident from the prolonged standoff in Ladakh for the past two years, with Beijing dragging its feet on the de-escalation that it had agreed to, in bilateral talks — but in every other sector as well. There are also clear attempts to change the narrative so that Indians remain in the dark about the true picture.

The Chinese know well that the media and citizens at large in a democracy like India can make up their own minds, and are not compelled to toe the line of the government (or the party) about China or any other matter. But they still try to bludgeon and intimidate others to see things their way — for that is a habit!
Xi Jinping is only following Mao’s December 1936 “War of Annihilation” dictum: “By annihilating the enemy’s effective strength... we replenish ourselves by annihilating his units. Injuring all ten fingers of a man isn’t as effective as chopping off one. In establishing our own war industry, we mustn’t allow ourselves to be dependent on it. Our basic policy is to rely on war industries of imperialist countries.” Literally and metaphorically, replace the word “war” with “economics”, and you get the answer. The CPC first demands, then dispossesses, owns and controls. Compelling a target country like Pakistan, then smaller nations, to become vassals. In India — too big, populous, a noisy democracy — the CPC modus operandi is to penetrate deep into each sector to cripple it. Recall Deng Xiaoping’s words: “Bide your time, hide your intention” India today faces the hydra-headed Han monster which is operating deep inside our hinterland by deceiving the entire state paraphernalia, but is also showing its teeth.

The 1962 ignominy happened because Jawaharlal Nehru was too naïve, too trusting and took Mao Zedong and the Chinese at their word. Have we learnt no lessons at all? New Delhi seems intent on repeating the same blunder, only this time with deeper and more disastrous consequences.