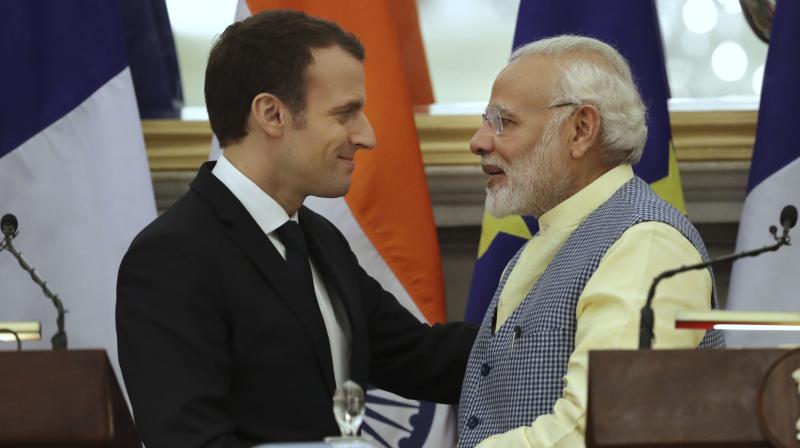 Concrete collaborations are, and will be, undoubtedly difficult, they will face obstacles, which in the end can only help deepen bilateral relations. (Photo: AP)

President Xi Jinping recently affirmed that “time and momentum are on China's side”. The Great Helmsman believes in the “great rejuvenation of Chinese nation” led by the soon-100 years old Communist Party of China; he, however, cited challenges, adding: "The world is in a turbulent time that is unprecedented in the past century.”

Only the future will ascertain if the “momentum” is indeed on China’s side, but there is no doubt that the world is going through uncertain and difficult times. As this is bound to continue in 2021 and probably beyond, India has to find reliable and unwavering support abroad.

For over 20 years, France and India have been practising cooperation. Recently, India had supported France when the country was attacked by Islamic fundamentalists: “India stands with Paris at this difficult moment and fully supports the French government on this issue,” affirmed New Delhi.

Trust is the key in every relationship. When President Jacques Chirac came to India in 1998, he proposed a strategic partnership. Prime Minister Atal Behari Vajpayee readily agreed to give a concrete shape to one based on shared values.

The 1998 Indo-French partnership is deep for many reasons; one of them is a shared vision of the world. Further, France has never tried to bully India into accepting its views, while standing by India during the nuclear tests, in favour of a UN Security Council seat and on terrorism. This has not always been the case with other countries, including the United States.

The recently-concluded “Exercise Desert Knight-21” held in Jodhpur is another example of sharing. With 11 Rafale aircrafts having already joined that Indian Air Force (IAF), the collaboration has been a game-changer for India in the confrontation with China in Ladakh.

Speaking in Jodhpur, Air Chief Marshal Rakesh Bhadauria said the first priority had been for the IAF to integrate the fighter planes in the existing fleet: “It has been done and the current exercise Desert Knight is the result of that.” French Ambassador to India, Emmanuel Lenain, noting that the first French aircraft landed in India in 1953, observed “the partnership has persisted through good and bad times”.

According to some sources, France agreed to an Indian request that defence technologies will not be shared with Pakistan. Further, Mr Bonne would have offered that 70 per cent of the assembly line for future Rafales could come under “Make in India” scheme, with technology transfer.

During the recent India-France-Japan Workshop on the Indo-Pacific held in Delhi, the foreign secretary said: “The Indo-Pacific has become an essential concept in international relations today.” It is certainly a field where Paris and Delhi could collaborate, however, a “turbulent-time” partnership means more than joining a new grouping or buying a few combat aircrafts. Of course, sharing advanced technology is difficult; years ago, Safran, the French company which has developed the engine for the Rafale, tried to work with DRDO on a new engine for the Tejas, nothing has materialised.

One still remembers how difficult has been the cooperation and transfer of technology under the “75 Project” for six Scorpene submarines. The fifth Scorpene, INS Vagir, built by the Mazagon Docks Limited (MDL) with technology transfer from France was launched in November 2020; MDL will manufacture a total of six submarines with technology assistance from the Naval Group under a US $3.75 billons deal signed in October 2005.

Concrete collaborations are, and will be, undoubtedly difficult, they will face obstacles, which in the end can only help deepen bilateral relations. It is ironic that for years Paris believed in the depth of its relations with China, so much so that a P4 Lab was “offered” to China in Wuhan, with consequences that are suspicious today. The P4 lab episode is an example of what should never be done — work with untrustworthy partners.

What is required for France and India is to take their relations to the next level; for this, both nations need to work on a “big” research project. I am thinking of an armed drone of the next generation; another field could be quantum communication, yet another could be a sixth-generation aircraft. In Jodhpur, the Air Chief said, “Our present vision is to incorporate all the latest technologies and sensors in our fifth-generation aircraft” and at a later stage work on a sixth-generation plane, a project in which both nations could collaborate.

For this, the thrust of the leaders of both countries is necessary — but can they find time to “dream” in these turbulent times?