K.C. Singh | De-escalation at LAC: Is a real solution in sight? 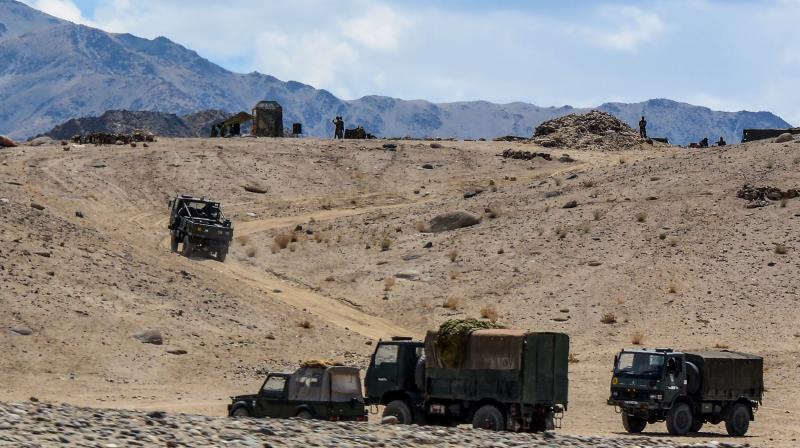 The Ladakh de-escalation may just be both sides stepping back, having tested each other’s “red lines”, to try rebuilding trust and resume the usual path of cooperation, competition and calibrated friction. (Representational Photo: AFP)

Former Army Chief and now Union minister V.K. Singh’s rash comment on the Line of Actual Control having often been breached by both India and China caused an uproar, with Beijing seizing on it as proof that India was the aggressor. But when news emerged of a likely coordinated de-escalation in Ladakh, after the nine-month standoff between Indian and Chinese forces, Gen. Singh’s downgrading of the LAC acquired an intent. It was to ensure any withdrawal deal would not draw attention to Prime Minister Narendra Modi’s assertion last year that no one had intruded into India.

Defence minister Rajnath Singh told Parliament on Thursday that a mutual and calibrated withdrawal of forces, north and south of Pangong Tso, was underway, but unwisely refused to share details, pleading their “sensitive and operational” nature. This naturally raised questions whether the likely buffer-zones ceded space historically and traditionally patrolled by Indian soldiers. Some speculated whether China had managed by subterfuge to push the LAC closer to its 1959 claim-line.

The defence ministry decried the next day “misinformed and misleading comments”. It reasserted India’s old claims, including the illegal occupation by China of 43,000 sq km in Aksai Chin, as shown in Indian maps. The LAC passes through Finger 8, north of Pangong. Mutual withdrawal will create a buffer-zone between Fingers 4 and 8. India will retain its Dhan Singh Thapa outpost near Finger 3, while Chinese troops shall stay beyond Finger 8. The intrusions at Hot Springs, Gogra and Depsang Plains will be tackled after current withdrawals are completed. The 255-km Durbuk-Shyok-Daulat Beg Oldi road runs at places alongside the LAC, giving connectivity to the Karakoram Pass. At Depsang plains, the flat terrain allowed China to make deep intrusions, threatening the highway.

Multiple questions on about the timing and depth of the Chinese intrusions from April-May 2020, in the middle of a global pandemic it caused. Also, why the flexibility now after months of sabre-rattling. China may have had multiple motives for the sudden, heavily armed and wide-fronted intrusion, under the subterfuge of spring military exercises in Tibet. It had strongly objected in August 2019 to the unilateral revocation of Article 370, affecting the status of a “disputed territory”, where China had a stake. In September, the “Howdy Modi” Houston rally with President Donald Trump signalled a growing India-US proximity. Meanwhile, US-China relations mired in trade sanctions. Then came Mr Trump’s return visit to India in February 2020, in an US election year, indicating a deeper Trump-Modi connect. Meanwhile, the Covid-19 epidemic began swirling as Wuhan was locked down. In mid-March 2020 President Trump termed the new pandemic “China Virus”. All these would have heightened Chinese paranoia. China also saw a chance for strategic gain by repositioning as the world was distracted by the pandemic.

Thus, China also began ratcheting up its aggressive behaviour towards US allies Australia and Japan, that along with the US and India are part of the “Quad”. In May 2020, as the Ladakh LAC heated up, China hit Australian barley and beef exports. In August, Australian wine faced anti-dumping duties. By September, China fully suspended barley imports, ordering stricter controls on wheat. The next month, the squeeze was extended to Australian coal. Similarly, regarding Senkaku or Diaoyu Islands held by Japan, in the 17-month period from April 2019 to August 2020, Chinese vessels were inside contiguous zone 456 days out of 519, as against half that in the previous period. Chinese President Xi Jinping’s Japan visit, due for early April 2020, was postponed, ostensibly due to the pandemic. In July, Japan’s ruling party cancelled it over China’s imposition of a new national security law on Hong Kong.

China in May 2020 imposed draconian controls over Hong Kong, in breach of its international commitment to Britain. China also sharpened its tone on Taiwan, as the US began upgrading its Taiwan ties. The US-China verbal exchanges exacerbated as US presidential elections neared. After Mr Trump’s defeat, outgoing secretary of state Mike Pompeo directly alleged genocide by China in Xinjiang against the Uighurs.

Having opened multiple flashpoints against its continental and maritime neighbours, China awaited the outcome of US presidential elections before reassessing tactics. The Biden administration’s endorsement of the Trump approach to China, but with smarter tactics like outreach to key allies for building an “alliance of democracies”, put China on notice. India’s success in handling the Covid pandemic and its economy recovering rapidly also showed that the Chinese browbeating had faltered. China, in any case, had succeeding in underscoring Indian vulnerability to determined Chinese pressure at the LAC, especially with an irate Pakistan acting in tandem. India also needed to buy peace abroad, with farmers agitating at home and a Biden administration murmuring nervously about human rights and democracy breaches in India.

Will buffer zones be a precursor to a mutually acceptable delineation of the LAC or just a Band-Aid solution to a deeper problem of China seeking Asian hegemony and bipolarity with the US globally? Are there some unwritten understandings on India scaling back its border infrastructure upgrade, handling of the Dalai Lama, non-militarisation of the “Quad”? It is unlikely China will curb its South Asian ingress, using the Belt and Road projects. It is unimaginable that a nationalist Indian government will concede Chinese hegemony. Thus, the Ladakh de-escalation may just be both sides stepping back, having tested each other’s “red lines”, to try rebuilding trust and resume the usual path of cooperation, competition and calibrated friction.