The French foreign minister was in India on an official visit during India’s May 1998 nuclear tests. 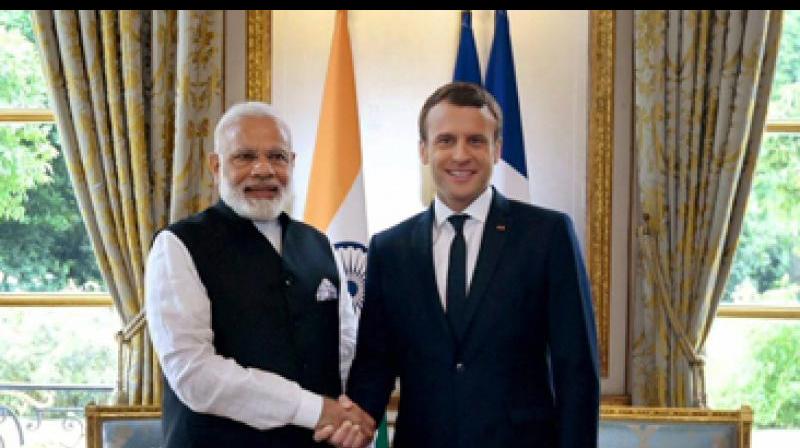 Long before the two decade-old “strategic partnership” between India and France that visiting President Emmanuel Macron, on his first trip to this country that ended Monday has promised to “widen” and “deepen”, the relationship between the two nations had salience. India — and particularly the Francophile Prime Minister Indira Gandhi — saw France as a nonaligned European nation, hovering between formal membership of Western alliances and Gaullist self-assertion.

The French foreign minister was in India on an official visit during India’s May 1998 nuclear tests. France reacted with equanimity, compared to the United States and the rest the Western alliance. The strategic engagement began then, and the Macron visit commemorates two decades of that. The two nations were also co-hosting the first International Solar Alliance (ISA), attended by some 30 countries, including two dozen heads of state.

Mr Macron’s swipe at US President Donald Trump was not surprising as the Paris Agreement on climate change was hobbled when Mr Trump withdrew American support. Prime Minister Narendra Modi’s stepping in, besides Chinese support, saved the accord and the ISA was born. Developing nations sought when supporting adaptation and mitigation measures to curb climate change, a bargain at the root of the Paris Agreement, finance and cheaper technologies. Otherwise climate change evangelism could become a new debt trap for developing countries. The ISA addresses both issues, having become the first UN agency to be headquartered in India, aiming to raise $1 trillion by 2030 to make solar energy the affordable panacea for energy deficiency developing nations.

The Indo-French joint statement addresses significant issues like nuclear energy, defence cooperation, space and strategic convergence in the Indian Ocean region. The nuclear issue rests on the 2008 framework agreement under which six EPR nuclear power reactors are planned at Jaitapur to produce 10 gigawatt of power. The National Nuclear Power Corporation (NPCIL) and the French company EDF signed an Industrial Way Forward Agreement. The deal has remained stuck over economic viability and technical soundness of the EPR design as under-construction projects in Europe and Asia have faced cost and timeline problems.

Moreover, after the 2011 Japanese Fukushima nuclear disaster and the fall in gas and renewal energy costs, the future of nuclear energy has been reassessed globally. France itself is reducing its dependence on nuclear power from 75 per cent to 50 per cent over the next decade. Nuclear project costs must include the heavy decommissioning expenditure, which for Fukushima alone will exceed $20 billion, besides $100 billion for the cleanup. In a heavily-populated nation like India, while nuclear power must play some role as a “baseload” provider in the energy mix, the debate on indigenous design versus expensive and untested French technology will persist.

Defence cooperation remains the mainstay of the bilateral engagement. India has bought French equipment since the 1950s. The signing of another agreement on “Reciprocal Protection of Classified or Protected Information”,  the previous one having lapsed, needs scrutiny. Today technology-denial regimes like the Nuclear Suppliers Group or Missile Technology Control Regime no longer apply to India so why is an omnibus measure needed to treat every defence purchase opaquely, even precluding parliamentary scrutiny? The government’s reluctance to explain the Rafale plane purchase numbers and costs defies logic. If the French had given India a great discount below their global quote, then France should be seeking secrecy. On the contrary, it is India which is advocating silence. The globally-renowned Stockholm International Peace Research Institute (Sipri) argues that in 45 years, through open and non-official sources, they, as indeed the intelligence services of India’s other defence suppliers, could ferret out most details of defence sales globally. Transparency is necessary for controlling military spending, which the Narendra Modi government treats as seditious to question. It also generates trust and confidence between rival states. Pakistan and China must not be left guessing Indian capabilities for better deterrence. France is erring by subscribing to the Modi government’s approach, given the past lack of probity and corruption at the highest levels of French governments. A successor government in India may reopen the deal and, in any case, it will be publicly bandied in the campaign for the coming elections.

An agreement on “reciprocal logistics” allowing the use of each other’s defence facilities boosts Indo-French convergence in the Indian Ocean. It counters the growing Chinese access to ports or even potential bases like Djibouti and Gwadar. Joint military exercises, with a naval exercise Varun likely next month, are to increase. The French adoption of three cities — Chandigarh, Nagpur and Puducherry — for Smart City conversion deserves praise. The first has its French-Swiss architect Le Corbusier as the driving force and the last was France’s final colony in India, from which it departed peacefully, unlike Portugal, which was forcefully evicted from Goa.

While France joins India in condemning terrorism and naming Pakistan-based groups targeting India, its focus is more on the terrorists of North African or Arab descent. Both nations support the Joint Common Programme of Action (JCPOA), the P5+1 Iran nuclear deal. This balances President Donald Trump’s Iran-baiting. President Macron plays both sides on the Chinese Belt and Road Initiative, but as the clear co-leader with Germany’s Angela Merkel of the European Union, he may be beginning like Germany to see China as a predator of European intellectual property and not a benign free-trader.

With the Italian election mandate fractured between the right-wing League and populist 5-Star Party, Italy’s Aam Aadmi Party, and Britain distracted by Brexit, for India the Franco-German leadership of the EU assumes greater importance. Mr Macron wants a stronger EU, more centralised fiscal control and a common military force. Europe may be beginning to emerge as a pole, independent of the US. That matches the Indian vision of a multipolar world. Charlemagne in The Economist writes that “Franco-German tandem… does not work if the passengers are veering off in different directions”. Nor will the Indo-French bonhomie if there is opaqueness and secrecy in defence deals.