Opinion   Columnists  13 Apr 2020  By ignorantly accusing the Markaz, we may be unwittingly blaming the Centre
Opinion, Columnists

By ignorantly accusing the Markaz, we may be unwittingly blaming the Centre

'Markaz' is a word that means 'Centre', and is often used as short form for markazi hakumat 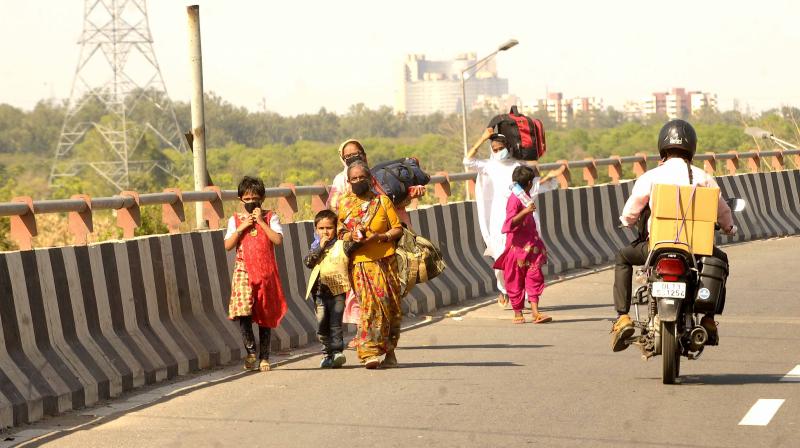 Migrant workers set out for their villages during the ongoing coronavirus lockdown in India. (DC Photo: Pritam Bandyopadhyay)

With Nizamuddin emerging as a coronavirus hotspot, there's been much verbal confusion relating to a Muslim sect whose global centre is located in the area. Suddenly,  politicians are blaming the 'Markaz' for the spread of the coronavirus in India. Of course, the sect cannot be absolved of its role in the episode but why blame the Centre? Yes, the word 'Markaz' means 'Centre' and is at times used in Urdu as a short form for central government. Just as in English the word 'Centre' is linked with the central government, in Urdu 'Markaz' is linked with markazi hakumat (hakumat means government).

Paradoxically, while targeting this sect, by using the word 'Markaz', most people have not bothered to ask themselves exactly what or who they are blaming. In all probability, 90 per cent of Indian Muslims and more than 90 per cent of Indians are not really familiar with this sect. Let us accept it, those who are somewhat familiar with Nizamuddin associate the area with Sufism. However, this Islamic sect that is being blamed for the corona spread is not at all linked with Sufism. Rather, the building in Nizamuddin is the global centre of the Tablighi Jamaat, an offshoot of the Deobandi order, which was founded to eclipse Sufism.

Muslims across the subcontinent are roughly divided into two orders, Deobandi and Barelvi. While the latter give importance to Sufism, the former choose to stay clear of it. Their reach is primarily confined to the subcontinent. If they have spread to some parts of the world, it is because people of this region settled there. In essence, this 'division' in Muslim society is not as strict as the caste system in India. Many families have members adhering to different orders, or none at all. It is all a matter of personal choice. In fact, quite a significant number aren’t even aware of these two orders. Those who wish to visit Sufi places do so out of their choice and not because they are for or against any order.

Mention the words 'Deobandi' and 'Barelvi' to a person from any of the West Asian Muslim countries, chances are that he or she would wonder as to what is being talked about. Social divisions within the Indian Muslim society are totally different from those in other parts of the world. But people in those parts of the world would certainly be familiar with the word 'markaz', it being a word of Arabic origin. It means 'centre' for them too.

It is possible that the Indian news outlets which blamed the “Markaz” for the corona spread may have befuddled people in other parts of the world. What a blunder! Rather than blaming the “Markaz” (that is, the Centre), it would have been more appropriate to hold the Tabligh-i-Jamaat’s Nizamuddin office specifically responsible for not calling off its congregation. Of course, this may be countered by saying, why should only a Muslim group be blamed when other religious groups too disobeyed restrictions on assembly? This is not a religious issue. The coronavirus is not spreading by taking into account the religious or national identity of its target. Yet, the sect’s mistake did give scope for the spread of communal messages targeting not just its members, but the entire Indian Muslim community.

At the same time, it is a fact that the Indian community did see through the fake news accusing the Tablighi Jamaat of all kinds of other activities. A strong percentage of the population came out questioning such “news”. While those who did not take precautions against the spread of the coronavirus cannot be excused, their error too cannot be used as a pretext to spread communal hatred in the country. Let us admit it, such tactics are often used to divert people’s attention when crucial things have been mishandled by key leaders.

Of course, a lot can be said about why this scheduled meeting of the Tablighi Jamaat did not catch the attention of authorities earlier. Why were its members coming from other countries not tested at airports? Why were they granted visas at a time like this? Ironically, each of these questions can be used to blame the Centre (Markaz) for not taking appropriate steps in time. Unwittingly, use of the word — Markaz and not Tablighi Jamaat — is equivalent to blaming the central government for not realising the threat of the corona virus the day the first case was reported.

To the people at large, Nizamuddin has always been more than the location of the Tablighi Jamaat's HQ. It has always been more famous as a centre of Sufism, a place where outsiders feed the poor irrespective of the religion they belong to. The poverty that is forcing migrant workers to walk home or the relentless spread of the coronavirus are not influenced by anyone’s religious identity. Those who attempt to impute such linkages are displaying their own failing. They are blowing communal bubbles which are likely to burst sooner or later.