Waqyanavis: Back to the chaddis, boys

Because if you do good deeds wearing trousers, no one thinks you're the RSS 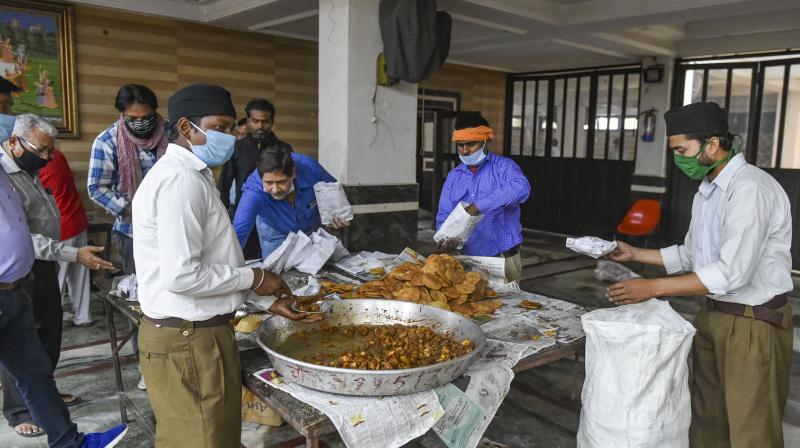 RSS volunteers pack food for distribution to people laid off during the current nationwide lockdown in old Lucknow on April 10, 2020. (PTI)

It’s back to basics. The Rashtriya Swayamsewak Sangh’s (RSS) much-talked-about change of uniform from the traditional khaki shorts to a pair of trousers has been temporarily suspended. In the wake of the coronavirus pandemic, RSS volunteers in Uttar Pradesh, Delhi and the rest of the country are trying to do their level best to check the spread of the coronavirus.

However, in the absence of the signature khaki shorts and black cap, the optics of the RSS cadre giving their 100 per cent were somehow getting blurred. So at an informal level, many local shakha pramukhs have reportedly sanctioned the trademark khaki shorts to reinforce the Sangh’s image-building. Nobody is complaining.

The Grand Old Party is proving to be a surprise during the Covid-19 pandemic. The chief ministers of Congress-ruled states, namely Ashok Gehlot (Rajasthan), Bhupesh Baghel (Chhattisgarh) and Capt. Amarinder Singh (Punjab), are doing well to curb the menace. More significantly, their PR machinery is doing its job.

Not a day passes when one of the Congress CMs does not do a video press conference. In Maharashtra, the Congress’ former chief minister Prithviraj Chavan is going from village to village to propagate social distancing. Chavan is heading a Sonia Gandhi-appointed panel on the coronavirus in Maharashtra. Sonia is herself using technology to the hilt, talking to chief ministers, state unit chiefs and other notables through video conferencing.

However, her suggestion asking prime minister Narendra Modi to ban government advertising on TV and in newspapers has not gone down well with most media proprietors and journalists. Sources close to Sonia insist that the proposal was screened and vetted by Dr Manmohan Singh, Ahmed Patel and other senior AICC functionaries.

Madhya Pradesh chief minister Shivraj Singh Chouhan is facing a problem of plenty. He is poised to expand his council of ministers but for each portfolio he has three serious contenders. Ministers who worked with him till December 2018 are claimants. Among the 22 MLAs who resigned from the Congress and defected with Jyotiraditya Scindia, six were ministers in the Kamal Nath council of ministers and another dozen fancy their chances. Chouhan’s own party MLAs who had missed being minister previously want their work and talent to be recognised as well.

Representatives of various faiths in Lucknow have been pleasantly surprised to hear Yogi Adityanath speak in a conciliatory tone so unlike him. The occasion was the chief minister's initiative of consulting religious leaders on tackling the coronavirus. In his remarks, the Yogi reportedly underlined the need for unity and frowned upon a campaign to hold the Tablighi Jamaat responsible for the coronavirus spread. While Yogi did not name the Jamaat, his pronouncements were measured and could have been easily passed off as that spoken by a non-BJP CM. As if taking a cue, the Uttar Pradesh police have cracked down on fake news. In one instance, it went public exposing a Delhi-based news agency known for its right-wing flavour.

It has been nearly 55 years since Manna Dey sang 'Aye meri Zohra Jabeen' in the film Waqt. Picturised on Balraj Sahni, the song is sung by on-screen character Lala Kedarnath in praise of the blushing mother of his three sons (Achala Sachdev).

The song is actually based on a musical composition by Afghanistan’s Abdul Ghafoor Breshna (1907-1974), a famous painter, poet, director, and musician who also composed the national anthem for the Republic of Afghanistan. The word, breshna, implying “lightning”, was added by the artist himself. Abdul Ghafoor Breshna's 113th birth anniversary was celebrated in Afghanistan this week.