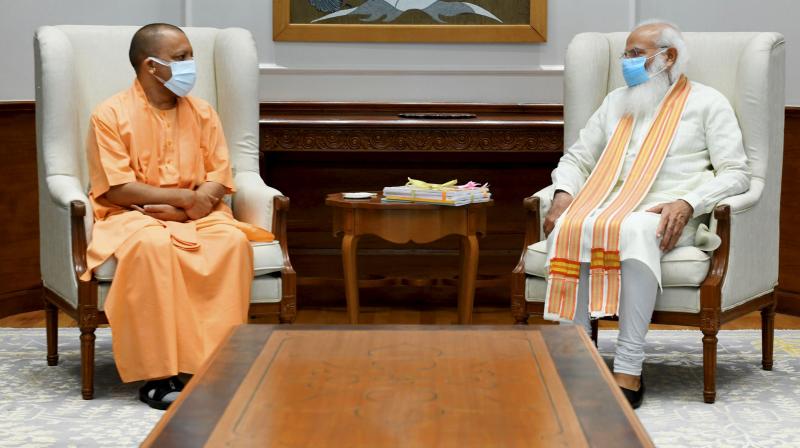 When the Bharatiya Janata Party dispatched senior leaders B.L. Santosh and Radha Mohan Singh to Lucknow earlier this month to get feedback about the handling of the coronavirus pandemic by the Yogi Adityanath government, it was expected that they would meet with all legislators. But Mr Santosh and Mr Singh met only a section of ministers and state party leaders after which chief minister Yogi Adityanath was given a clean chit for successfully tackling the second wave of Covid infections. Already upset with Yogi Adityanath’s style of functioning, this led to further resentment among the BJP legislators who hoped to get an audience with the leaders so that they could apprise them of their grievances. The party’s MLAs are unhappy as they feel neglected by the chef minister who, they maintain, depends solely on the bureaucracy. The MLAs have reason to worry as many of them were imported from other political parties before the last Assembly polls and with the next election coming up in early 2022, they are not sure if they will have to make way for fresh entrants. They were, therefore, keen to apprise the BJP leadership about the hurdles they face in addressing the demands of their constituents, before they are axed for their non-performance. They are hoping Yogi’s meetings with the Prime Minister and home minister Amit Shah will yield positive results.

Image management has been on top of the Modi government’s agenda. The Centre first came in for severe criticism from the domestic and international media for not anticipating the second wave of the coronavirus pandemic. Even as the government’s spin doctors were in the midst of handling this negative commentary, the government was pulled up by the Supreme Court which described its vaccine policy as “arbitrary and irrational”. Going into damage control mode, Prime Minister Modi announced a centralised procurement of vaccines and free doses to all in his address to the nation on June 7. Following this announcement, the government’s spin doctors were again on the job. “Friendly” media-persons were informally told that the Prime Minister had actually given in-principle approval for centralised free vaccine on June 1, two days before the Supreme Court’s observations. Subsequently, the chosen journalists put out identical tweets giving the official version.

It is no secret that Gandhi loyalist Jitin Prasada was set to join the Bharatiya Janata Party two years ago but was dissuaded from leaving the Congress by Rahul Gandhi and other senior party leaders. According to the political grapevine, Mr Prasada decided to switch sides now as he had fallen out with Priyanka Gandhi Vadra, Congress general secretary in charge of Uttar Pradesh, who did not include him in the state unit’s activities. With Assembly elections coming up early next year, Mr Prasada apparently thought this was the most opportune moment to leave. When the young leader was given charge of poll-bound West Bengal earlier this year, everyone believed Mr Prasada was back in favour even though he was among the signatories to the letter seeking radical changes in the Congress organisation. But, it appears this appointment was meant to ensure Mr Prasada’s absence from Uttar Pradesh, Plus, he was deliberately given this “punishment” assignment in which he was bound to fail.

As Punjab chief minister Amarinder Singh looks set to emerge victorious in the ongoing battle with his bete noire Navjot Singh Sidhu, he will have to thank his wife and Patiala MP Preneet Kaur for the final outcome. The chief minister or Captain, as he is called, deputed Preneet Kaur to speak with the dissident leaders. Unlike the Captain, Preneet Kaur is considered more approachable and consequently it was easier for her to talk to the rebels. If reports are to be believed, her efforts have paid off as the majority of state leaders who were summoned by the three-member panel set up by Congress president Sonia Gandhi to resolve the Punjab imbroglio, were not in favour of replacing Amarinder Singh. The rebels basically want their concerns to be addressed. The truth is that this rebellion was never about a change in leadership but it was to ensure that those perceived to be in the anti-Captain camp were not ignored during ticket distribution in next year’s Assembly polls.

Unable to travel due to the coronavirus pandemic, Priyanka Gandhi Vadra has stepped up her presence on social media. She has, however, changed trajectory in recent months. Instead of focussing on issues pertaining to Uttar Pradesh, she has also started attacking Prime Minister Narendra Modi for the Centre’s vaccine policy, the shortage of oxygen and general handling of the coronavirus pandemic. But her numerous tweets, video messages and Facebook posts taking on Mr Modi have been ignored by the BJP which is usually quick to respond sharply to Rahul Gandhi’s tweets. The BJP obviously does not wish to take the focus away from Rahul Gandhi considering its campaign to project the Nehru-Gandhi scion as an immature leader has met with resounding success.